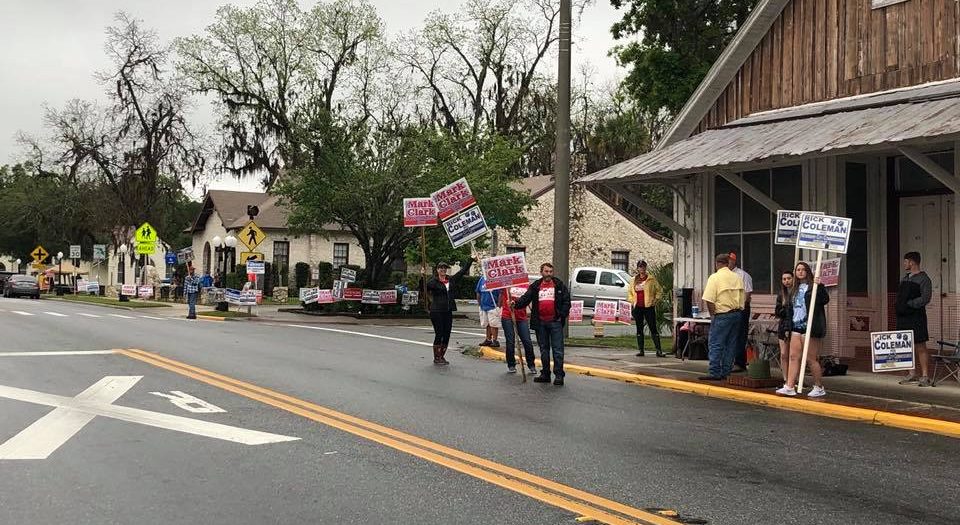 Here’s Who Won the 2018 Alachua, Archer, and Newberry City Elections

Voters in Alachua, Archer and Newberry were undeterred by the stormy weather as they showed up to the polls for the city commission elections.

It was especially busy for pollsters in Newberry as 16.51 percent of voters showed up to vote on city commission seats 1, 2 and 3.

Incumbent Ricky Coleman beat out challenger Jessica Mrozinske Baker with 56 percent of the race’s 694 votes to assume his third term as Seat 1 commissioner.

Throughout his first two terms as Seat 1 commissioner, Coleman has pushed the current commission to lower taxes and utilities while introducing merit raises for city employees.

With his re-election, Coleman plans to continue pressing forward to keep residents of Newberry working in the city, as opposed to commuting to Gainesville or other towns in the area.

“We brought in merit raises as an incentive to for people to stay and work in Newberry,” Coleman said.

Matt Hersom defeated both Mark Clark and Walt Boyer with 52 percent of the 699 votes to land Seat 2 of the Newberry City Commission.

Hersom, a 14-year resident of Newberry, currently serves on the Planning and Zoning Board and Architectural Review Board in the community. He is also an associate professor and Extension Beef Cattle Specialist in the University of Florida Department of Animal Sciences.

“We’re the third fastest growing city in Florida so we’re getting resident population, now we need some business amenities to start balancing that out,” Hersom said. “Whatever we can do to encourage commercial growth in town to help fill the needs of some of our residents is going to be important going forward.

For Seat 3, incumbent Monty Farnsworth narrowly defeated David Wallace with 53 percent of the 685 votes placed. This will be Farnsworth’s third term in office.

The city of Alachua also had three seats up for election as candidates vied for seats 3, 4 and 5.

However, it was a different story for Seat 5. Following a push between incumbent Gary Hardacre and Doug Hancock, a runoff election will be held May 1 to determine who wins the seat.

Out of the 866 votes, Hancock landed 33.49 percent of votes, with Hardacre coming in just below that mark with 32.68 percent of votes. Other opponents Dietra Howard and Gary Kocher accounted for the rest of the votes, with Howard receiving 28.06 percent and Kocher finishing with 5.77 percent.

Seat 4 was the sole spot up for grabs in the Archer City Commission election after being vacated by incumbent Susan Drawdy.

Despite no prior political experience, Melanie Bishop-Wells defeated former commissioner Doug Jones with 60.11 percent of the 178 votes cast.

A native of Archer, Bishop-Wells recognized a need for change within the community after moving back this past year.

“We need infrastructure, and roads definitely need to be repaired,” Bishop-Wells said. “But above all, I want to bring back the sense of community to Archer.”