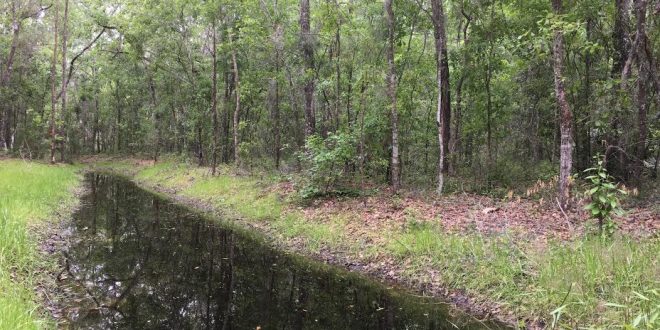 The view from the street in front of Neal Cohen’s house. The water that collects here typically drains in a day, but since last summer, this area has been full of water. (Ellen Andreu/WUFT News)

When rain rolls through the Hammock North neighborhood in northwest Gainesville, water pools in yards and along the roadside. It’s become a concern for residents fearing the water could damage their property.

“The water table is just about at the highest point,” Neal Cohen, a Hammock North resident, said.  “It’s flooding everywhere.”

The roads are damp, but standing water collects on either side of the road in the neighborhood, he said, which can have consequences beyond water damage.

“Fortunately, we aren’t having mosquitoes right now. If we were, I think everyone would be screaming,” he said. “But right now it’s just standing water.”

Matt Lang, vice president of the neighborhood homeowners association, said the overabundance of water is deteriorating his driveway and pool deck.

The water levels have remained high since the heavy amounts of rain during July 2017, he said.

The county has not maintained the culverts — water passages that flow under streets — along Millhopper Road, prompting residents to hire a company to clear out the culverts in the neighborhood. But the problem, he said, is the water has nowhere to go.

“The water next to my house sits. …It just isn’t soaking into the ground,” Lang said. “I’ve never seen it just sit this long.”

There are only two places the water goes, he said. One is a retention pond next to Lang’s property and the other is a natural pond next to Millhopper Road. The last time there was a bad storm, both of those ponds flooded.

“One of the things that a lot of people don’t seem to realize is part of the problem we are having here is the fact that it’s just so darn wet,” Lang said.

He said more drainage can be provided, but that still wouldn’t solve the problem because the water needs to soak into the ground.

It has gotten so bad, Lang said, that whenever there is a bad rain storm, his septic tank’s drain field stops draining properly to the point where he is unable to flush the toilet.

On the other side of the neighborhood from where Lang lives, the water comes up to the side of Millhopper Road and now the road is deteriorating, he said. Lang has lived there for 20 years and this is a recurring issue.

“I contacted public works and they sent this guy out. He came out while the area was flooded, and he said definitely this is a problem,” Lang said. “He admitted to me that the county not only was not maintaining the area properly, but he didn’t feel that it was engineered properly to begin with.”

Lang also pointed to a gravel road put in place for trucks to haul trees out of the forest that has caused a backup of water and overflow in the retention pond in the neighborhood. The state recently began a logging project in San Felasco Hammock Preserve to remove infested pine trees during a pine beetle outbreak.

“It (water) was about a foot deep where the state had their road built,” he said about the last time there was a bad storm in the area. “And it was just a giant lake all around my house and my neighbor’s house.”

James Link, a storm water engineer for Alachua County, said Millhopper Road doesn’t have a stormwater system to counteract flooding because the road predates current regulations that require such systems.

He also noted that the beginning of the service road leading into the preserve impeded the flow of water after park service added more material to the road. He assumed the problem was resolved when the park fixed the road grading in this area.

However, he said there may be some issues in the preserve on the remainder of the road inside their property that he is unware of.

Park Manager Robert Steele said in an email that park officials will continue to monitor the area for water-related issues. He said the soils in the area naturally drain poorly — especially during heavy rain.

The road into the park has been established for many years, since around the mid 90s, and is only used during park maintenance and restoration, he said. The road is low enough to let water flow through. If it was a main road, it would be more elevated.

Steele said he thinks the road is not blocking any water from flowing through the area.

Ellen is a reporter for WUFT News who can be reached by calling 352-392-6397 or emailing news@wuft.org.
Previous Morning News in 90: April 5, 2018
Next How Are Gainesville, Alachua County Going To Use Millions In Wild Spaces And Public Places Funds?