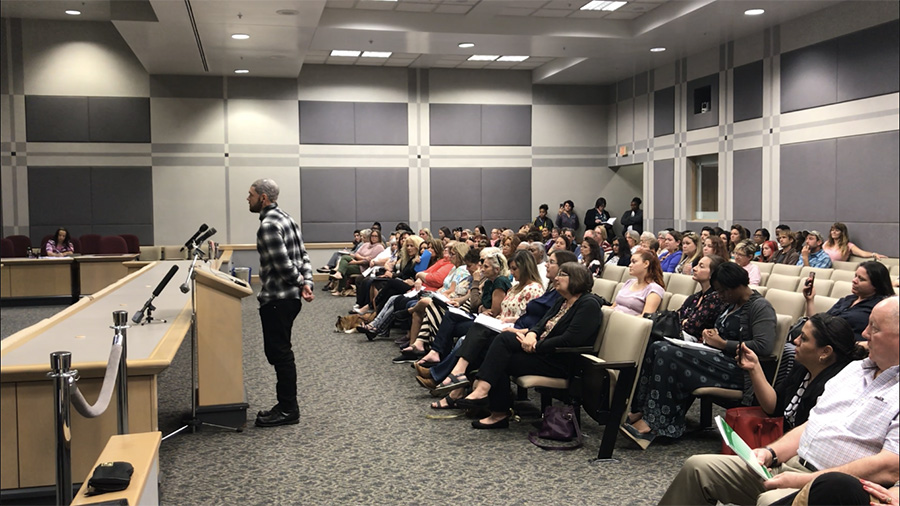 Kyle Ryan Williford, formerly incarcerated, explains how the FDC's issues are viewed from within the prisons.(Frances Pawlak/WUFT News)

Families and prisoner rights advocates drove hours through heavy fog early Tuesday morning to represent their incarcerated loved ones and voice concerns at a public hearing held by the Florida Department of Corrections. Over one hundred people filled the courtroom of the Capital Circle Office Center in Tallahassee to take turns in front of the podium and beseech FDC officials not to put further restrictions on the visitation schedule.

The FDC announced the hearing March 27, giving members of the public a week to prepare their responses to proposed changes to Rule 33-601.722, guidelines delimiting visitation schedules for Florida prisons. The new rule will permit inmates a minimum of two days per month, two visitation hours each day, which families say is a cutback on the previous allowance of weekly visitation on Saturdays and Sundays.

From a dais at the far end of the courtroom, separated from the audience behind several desks, FDC staff addressed the crowd.

“Over the past year, the department has been faced with staff shortages and an increase in contraband,” said Richard Comerford, an FDC assistant secretary. “The number of recovered weapons, cell phones, and illicit drugs continue to rise across the state within our facilities.”

“In many of these incidents, contraband have been linked to visitation,” Comerford continued. “The proposed changes to this rule will provide the department with the ability to evaluate these areas and adjust visitation schedules in a manner to provide a safe and secure visitation experience for all.”

An agency spokeswoman proceeded to call the names of people who had submitted Public Hearing Appearance Request/Record form prior to the meeting. Due to a large number of submissions — over 150 —  each speaker was allotted no more than two and a half minutes each to say their piece.

During the next three hours, dozens of speakers vehemently appealed to both FDC officials and the audience, expressing heartfelt testimonies, statistics, and reasons for their overall mistrust of the agency.

“In my history with the FDC, 23 years’ worth, it does not do anything except the minimum,” said Jewy Tryon, the first member of the public to speak at the podium.

“I have with me today a petition where over 9,000 people have signed, requesting that you do not cut our visitation,” said Jewy Tryon, whose husband is serving a life sentence. “Families would like to let you know that in addition to visitation every weekend, we would be happy to use video visitation, but otherwise, if you’re going to try to cut our contact visits, we’re going to boycott the video visitation.”

In February, the FDC began implementing interactive multimedia kiosks through a contract with JPay Inc. The kiosks feature authorized entertainment and educational videos for inmates as well as monitored video communication at $2.95 per 15-minute session, according to the FDC website.

However, due to the coincidence of visitation cancellations during the same time frame, many of the speakers worried that the videos will replace, rather than compliment, current visitation hours, and that contraband is just an excuse to enforce the cutbacks.

“Your officers are bringing in the contraband because they are overworked,” witnessed Williford. “Your officers are bringing in the heroin, cocaine, methamphetamine. I have bought contraband from officers with cash money. It is not these people who have loved ones. You’re not punishing the inmates; you are punishing these people who are taxpayers, and they’re not criminals,” said Kyle Ryan Williford, a former inmate at Hardee Correctional Institute who was released on March 26.

Beth Gammie, an attorney representing a man whose wife is serving a life sentence, cited data from the Florida Justice Institute that reaffirmed the increase in contraband but concluded that visitors were responsible for only 2.5 percent of banned items introduced to prisons.

Comerford replied, “We are not here to discuss the statistics.”

Although the meeting was originally scheduled for 8:30 to 10 a.m., FDC officials continued to allow members of the public to share their stories, pleading on behalf of their families and make complaints against the agency for an additional hour and a half.

Renee Graves brought her son the podium as she spoke on behalf of her husband, whose prison sentence has hindered him from bonding with his child.

“Visitation hours are the only opportunity he has to eat meals together, play soccer with and have a difference in his son’s life,” Graves said. “Instead of sports club fees, we are paying for travel expenses so that my son can have a relationship with his father.”

Barbara Graves, Renee’s mother-in-law, immediately followed that the FDC’s proposed changes would make it impossible for her to visit her own son on account of her disability.

Per provisions of Administrative Procedures Act, Chapter 120, Florida Statutes, the FDC will consider the comments made at the public hearing and may choose to revise the proposed rule, whereby another hearing will be scheduled to review it. Otherwise, if no changes are made, the new visitation policy will be implemented within a month.

“I have not committed a crime, yet I’ve lost a child to incarceration, which is a 10-year prison sentence for me,” said Kim Lawrence, whose 18-year-old daughter has already served two years. “I cherish every weekend, every holiday that I am allowed to visit her.”

Frances is a reporter for WUFT News who can be reached by calling 352-392-6397 or emailing news@wuft.org.
Previous ‘Food For Fines’ Program Clears UF Parking Tickets
Next Morning News in 90: April 5, 2018