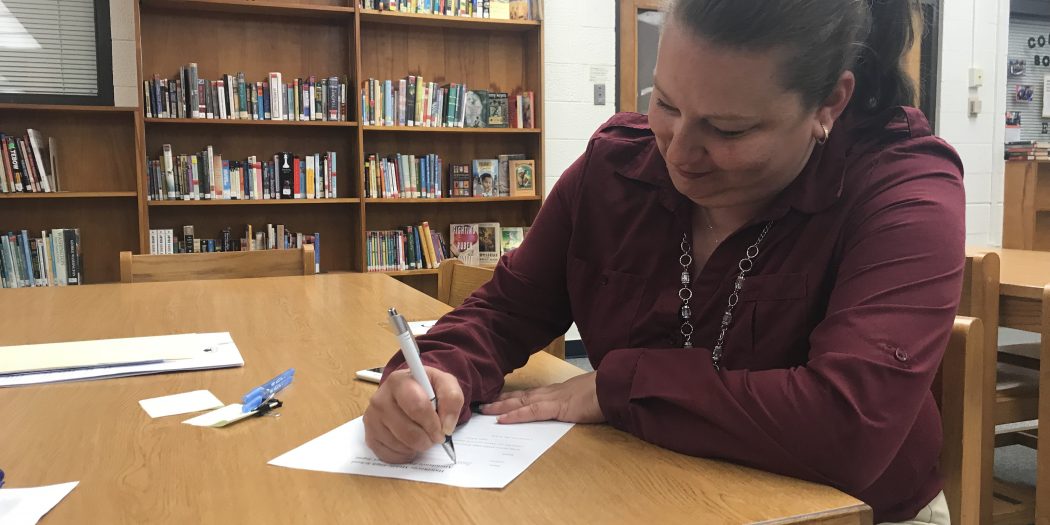 Brooke Huguley writes her opinion on where she thinks her eighth grade daughter should go to high school if Hawthorne is closed at the end of the 2017-2018 school year. (Camille Respess/WUFT News)

Brooke Huguley felt the pain of leaving her high school when she was rezoned in 1996. Her daughter was in the fifth grade at Waldo Community School when it was shut down in 2015.

Huguley, senior desk clerk at Chester Shell Elementary School, fears she will have to mourn the loss of another school to which she’s connected: Hawthorne Middle/High School. Her daughter is in eighth grade at Hawthorne.

Hawthorne Middle High School is facing a potential closure because it received D grades from the state for the past three years. According to the Florida Department of Education, these grades are based upon achievement, learning gains, middle school acceleration, graduation rates and college and career acceleration. House Bill 7069, which was signed into law a year ago, gives the school one year to turn around and earn a passing grade. If not, the school will close.

On Thursday, Hawthorne Middle High School held a pair of district rezoning workshops in case the school does not receive a passing grade and the students at Hawthorne have to go to another school starting in the 2018-2019 school year. Huguley and about 20 others were there to listen during the afternoon session.

When Brian Moore, staff attorney for Alachua County Schools, began the workshop, he said he hoped he was wasting the time of those in attendance.

“We are never going to need to use any of this because the school will stay open,” Moore said. Of the 20 people at the workshop, many responded with sighs of relief and echoed his sentiment.

Principal Daniel Ferguson wrote a similar message in a letter sent out to Hawthorne families on Wednesday. “… it’s my belief the district will not have to put any rezoning plan into operation,” he said.

Still, Moore said, precautionary measures need to be put in place if the school does end up closing.

Workshop attendees discussed rezoning options and where to send Hawthorne students next school year if the school does close. No decisions were made at the hourlong meeting. Rather, it was an opportunity to gauge where parents want to send their children if Hawthorne does close, Moore said.

“We want to keep our community together,” Huguley said.

The efforts to keep Hawthorne open extend beyond Alachua County.

The school district is suing the state because of House Bill 7069. Alachua County is not the only one. On April 4, 13 school districts in the state will go to Tallahassee for a hearing. The suit is challenging six provisions from the bill, including options for the turnaround plan created by the bill.

“There will be board members there from South Florida, Southwest Florida, the Panhandle. This is statewide,” Moore said.

Moore said the participating school districts hope to create a policy where local officials can take action on educational issues without the state stopping them at every step.

The grade Hawthorne receives is expected to be released in July. But the school is hoping to gain earlier access to their fate and is planning to request the state Department of Education to let them know in June.

In the meantime, the school community is pouring its energy into ensuring that Hawthorne keeps its doors open, Huguley said.

“We have a good feeling about this,” Huguley said. “But it is worrisome. We won’t know until we know.”