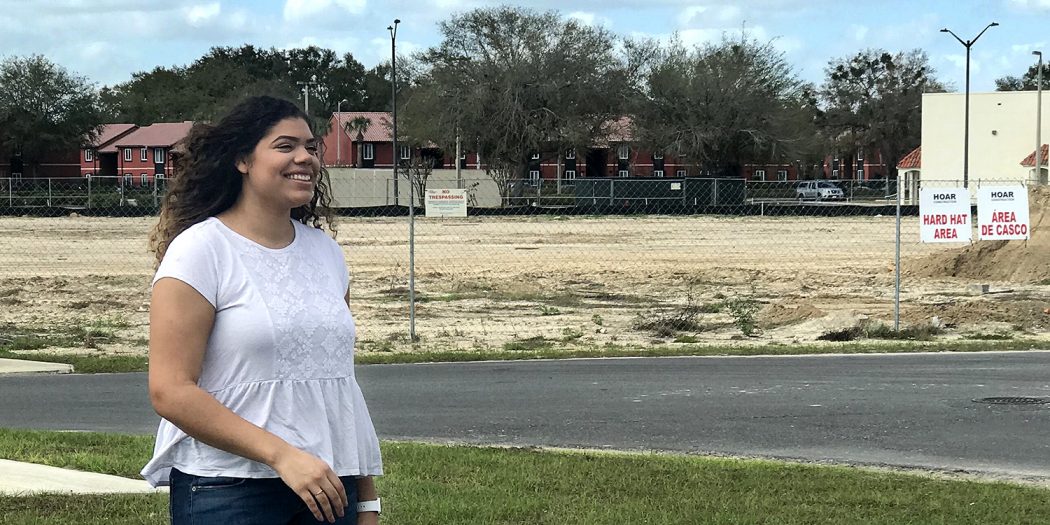 Danica Williams, 21, stands in front of the future Whole Foods Market on Archer Road. She is eager for the construction to end and to have a variety of new stores to visit.

The corner of Archer Road and SW 34th St. has undergone massive changes since the summer of 2016 when the plot of land was a previous Walmart. Whole Foods Market and a P.F. Chang’s are two additions coming to the new section of Butler Plaza, with Whole Foods scheduled to open spring 2018. And while store owners anticipate several grand openings in 2018 and 2019, for now it seems customers travel Butler Plaza Central less frequently.

Misook Wise, manager of Beauty Palette on Archer Road,  said the lengthy construction has noticeably impacted business and led to decreased foot traffic to the store.

“I’m pretty sure it’s going to get better in the future,” said Wise. “But for the last two years, it’s been really hard on business.”

In addition to construction, Wise attributed the drop in customers to a shift in area demographics.

“Many of the customers who shopped at Walmart also shopped here,” she said of her store. “Now that Walmart’s gone, fewer customers are passing through.”

Danica Williams, a University of Florida student who lives adjacent to the area, has never known Butler Plaza without the construction.

“The construction has been going on since I moved to Gainesville last spring,” she said. “I’m really excited to have more store options and for the parking lot to be a little easier to navigate.”

Williams shops Butler Plaza about four to six times per week. She said having so many stores and restaurants near her apartment made the transition to living in Gainesville an easy one.

Morgan Gustin, the general manager of The Hyppo: Gourmet Ice Pops, said that although they have maintained steady sales during construction, she thinks the new additions will boost business. Gustin said the addition of Whole Foods and more restaurants could bring an influx of foot traffic to the eastern portion of Butler Plaza, where The Hyppo is located.

“I’m excited to see what the new businesses have potential to bring in terms of more attraction to customers,” Gustin said.

Construction has been stead on Whole Foods Market, which will be the first store in the new Butler Town Center, and there are several new additions that will follow in late 2018 and into 2019. Residents and business owners alike are eager for the new stores and restaurants to open for business.

“Overall I think the new additions to Butler Plaza will be beneficial,” Williams said. “But I really cannot wait for all this construction to be done.”

Jamie is a reporter for WUFT News who can be reached by calling 352-392-6397 or emailing news@wuft.org.
Previous March 2, 2018: Morning News in 90
Next 13 Movies You Didn’t Know Were Filmed in North Central (and Other Areas) of Florida

The Saturday after Hurricane Elsa poured onto Gainesville, the city’s mycology club was back out looking for mushrooms on its weekend forays through the forest.