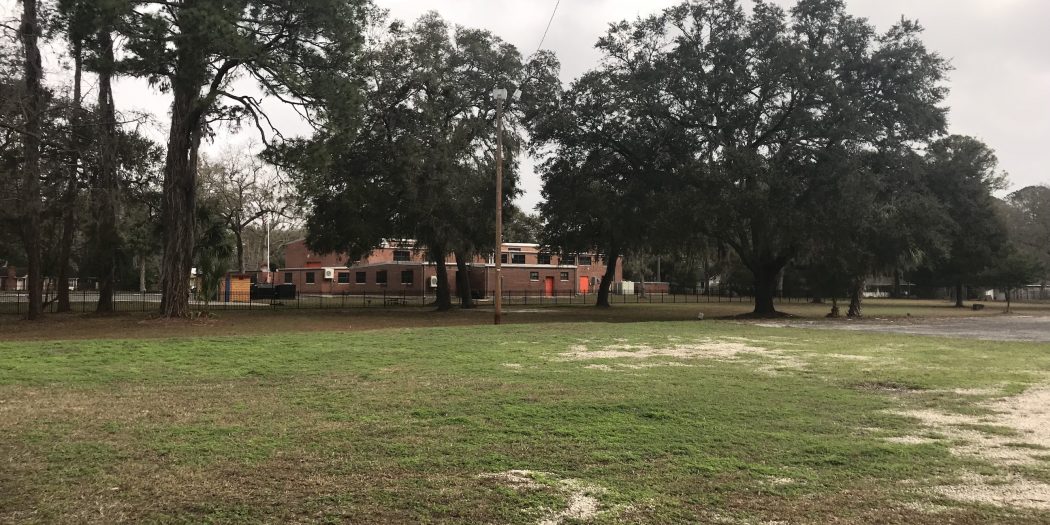 The site of a former U.S. Army Reserve Center in northeast Gainesville is set for a renovation after sitting unused for most of the last nine years.

This year the city of Gainesville finalized plans to revitalize the 6.8-acre lot, located at 1125 NE 8th Ave, and will turn it into a city park.

The Army moved out of the C. R. Layton U.S. Army Reserve Center in 2009. It was later reacquired by the city, prompting discussion and community collaboration on its improvement.

The city turned to CHW Professional Consultants in 2012 to create conceptual designs for the new park. CHW is an engineering firm responsible for numerous projects in Gainesville, such as the development of the Butler Plaza shopping center off of Archer Road and UF Health Shands Children’s Hospital. One of CHW’s recent projects includes the development of The Standard, an apartment-retail high-rise, which is located at the intersection of West University Avenue and Northwest 13th Street.

On Jan. 30, CHW Professional Consultants presented their design to the city and to the Friends of Reserve Park board at community workshop meeting.

Those who attended the workshop voted on park features they liked most.

Assistant City Manager Daniel Hoffman said the design of the park is headlined by a food forest that will consist of fruit trees and be maintained by volunteers from the surrounding communities.

He said this idea derived from the community’s wish for an exemplary and unique park.

“This park and its features are a result of community effort and community input,” Hoffman said. “The neighborhoods around the area are pretty close-knit, and my goal for this park is to serve them and the surrounding communities.”

The purpose of the Friends of Reserve Park board is to encourage community involvement and support for the park during the development stages so it can be a place the public will want to use.

“They presented a design that was the result of several community input meetings,” said Mandy Millam, president of the Friends of Reserve Park board.

The park will also feature a reservist memorial — a tribute to the park’s military history and those who served. Other features will include public art and sculptures, a playground inspired by nature and adventure, an amphitheater and a walking trail. The park will also provide the basics: bike racks, restrooms, and on-street parking.

Friends of Reserve Park is continuing to support the funding of the new park with the help of Wild Spaces Public Places, which is a half-cent sales tax used by the city to fund parks and conservation efforts. The total budget for the project is still being worked up, but groundbreaking for the space should take place in early 2018, Millam said.

Reserve Park, which is currently marked by an inaccessible parking lot surrounded by gravel-sprinkled grass, won’t be the sole inhibitor of the site nestled in the quiet neighborhood. The park will share the lot with Phalanx Defense Systems, which moved into the remaining building at the site in 2016. Phalanx is an armored safety product manufacturer that produces items such as bullet-proof vests.

The company has been a part of the conversation and has assisted in the development of the new park.

The park has a long military history in the area. Prior to this latest development project, the city conveyed the land to the federal government in 1950. By 1953, the property had been turned into a 35,625-square-foot Army Reserve Center. In 2009, the Army moved out, and in 2011, the land was conveyed back to the city.

Gainesville District 4 Commissioner Adrian Hayes-Santos says the new development offers a chance to expand the city’s park system. He called it a top priority and a step toward his vision for the city.

“It’s an addition to the broad network of public amenities throughout the city,” Hayes-Santos said. “My goal for the city is for it to have a world-class park system.”

Caelan is a reporter for WUFT News who can be reached by calling 352-392-6397 or emailing news@wuft.org.
Previous Gainesville Resident’s Idea Brings Local Community Together To Clean Up Sweetwater Branch Creek
Next After Losing An Eye, A Gainesville Magician Is Relearning How to Perform His Tricks