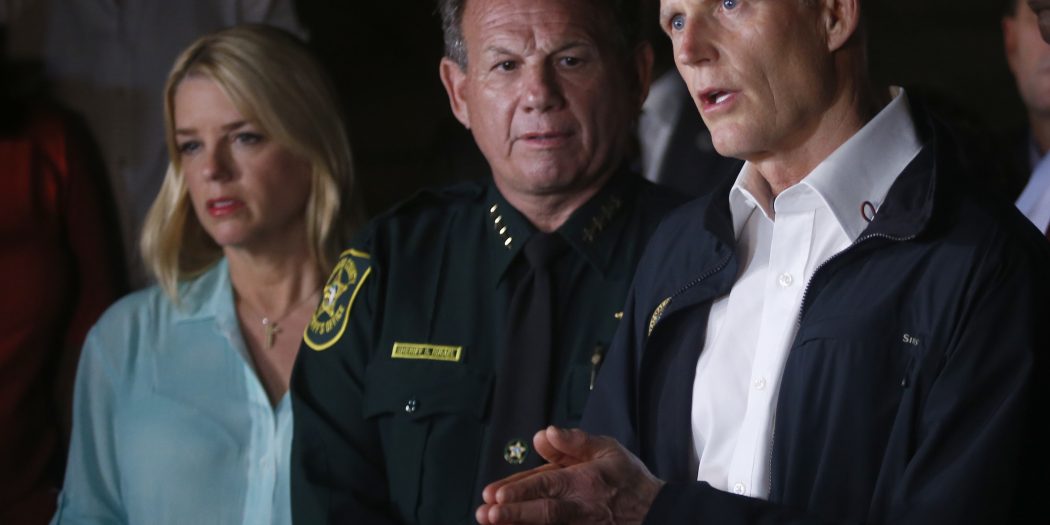 A week after one of the deadliest mass shootings in modern U.S. history, Florida Gov. Rick Scott announced a comprehensive plan to keep students safe in his state, including suggestions to raise the minimum age to buy a gun, keeping weapons out of the hands of the mentally ill and banning the sale of bump stocks.

“We must take care of our kids,” Scott, a Republican, said in a news conference announcing his plan.

The governor called for tougher background checks and waiting periods to buy firearms, toughening an act that permits police to place mentally ill people in custody and the allocation of hundreds of millions of dollars toward improving security in schools and mental health services.

“Keeping guns away from dangerous people and people with mental issues is what we need to do,” he said.

“No one with mental issues should have access to guns. It’s common sense, and it is in their own best interest — not to mention the interests of our communities. And much of what I’m proposing involves giving law enforcement the ability to stop people from harming themselves and others, while giving them the tools to keep our schools safe.”

But Scott said he’s not calling for a ban on all firearms.

“I know there are some who are advocating a mass takeaway of Second Amendment rights for all Americans. That is not the answer.”

In response to questions about calls for a ban on semiautomatic weapons and AR-15s, the governor said that “banning specific weapons and punishing law abiding citizens is not going to fix this. What we have to do is we have to really focus on the problem. We’ve got to take all weapons away from people with mental illness, people who are threatening themselves or threatening others.”

Here are other major elements on the section entitled “keeping guns away from dangerous and violent people.”

— “Create the ‘Violent Threat Restraining Order,’ which will allow a court to prohibit a violent or mentally ill person from purchasing or possessing a firearm or any other weapon when either a family member, community welfare expert or law enforcement officer files a sworn request and presents evidence to the court of a threat of violence involving firearms or other weapons.

— “Strengthen gun purchase and possession restrictions for mentally ill individuals under the Baker Act. If a court involuntarily commits someone for treatment under the Baker Act because they are at risk of harming themselves or others, an individual would be required to surrender all firearms and not regain their right to purchase or possess a firearm until a court hearing. A minimum 60-day period would be established before individuals can ask a court to restore access to firearms.

— “Prohibit a person from possessing or purchasing a firearm if they are subject to an injunction for protection against stalking, cyberstalking, dating violence, repeat violence, sexual violence, or domestic violence;

— “Establish enhanced criminal penalties for threats to schools, such as social media threats of shootings or bombings, and enhance penalties if any person possesses or purchases a gun after they have been deemed by state law to not have access to a gun;

— Exceptions on the age for firearms purchasing include active duty and reserve military and spouses, National Guard members, and law enforcement.

Scott said he disagrees with the notion of arming educators, saying teachers should teach and police should police.