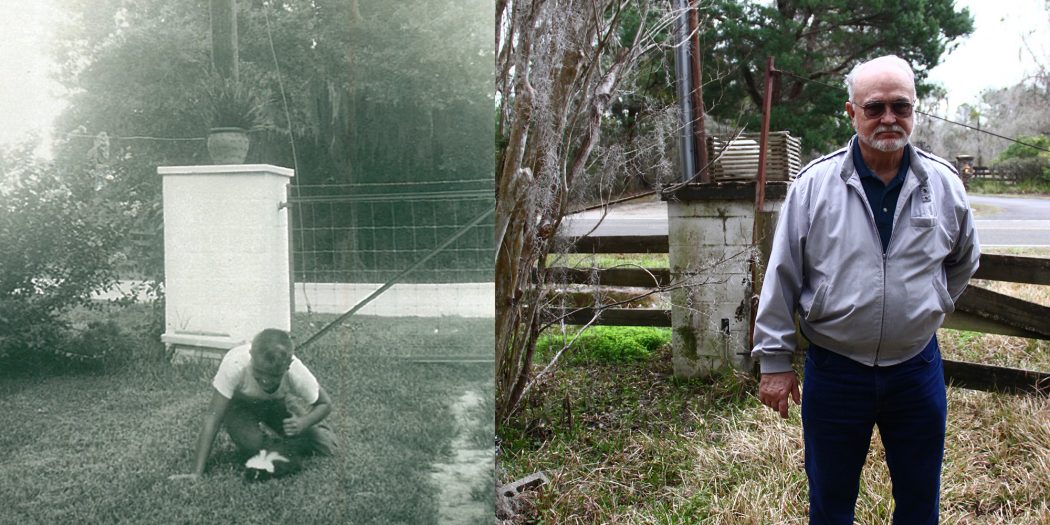 Left: Bob Shanks, 74, playing with his pet skunk "Claude" in his front yard back in 19. Right: Shanks standing in the very same spot, years later.

Turn off of State Road 26 onto County Road 1469 and you’ll find yourself in the quiet town of Earleton. Fields filled with dead pecan trees and old farmhouses greet both sides of the road.

Just a post office and an antique shop mark the town center. Make a right down to Lake Santa Fe and you’ll see the remnants of the fish camp where residents would gather to dance and drink throughout the 20th century.

The once bustling spot is now filled with silence, but perhaps not for long.

There is a chance that at least some of the bygone glory of what Earleton will return with the opening of the Boat House at Santa Fe Harbour in April. The current owner of the property, John Vanderschoot, has been working to transform the old fish camp into an event destination.

“We are renovating it to be rented out for parties and weddings and that type of thing with catering,” he said. “We will have a grill for boaters, too.”

There won’t be a restaurant like before, but there’s a chance it could rekindle a bit of the community spirit.

Earleton was once known as a paradise for locals to come relax and party on the pristine Lake Santa Fe.

The town, previously called Rosetta, was renamed in 1887 after the first settler on the western shore of Lake Santa Fe, Gen. Elias B. Earle.

Gen. Earle fought in the Mexican War and moved to the area with his wife and children in the late 1850s.

In the late 1800s and early 1900s, Earleton was in its prime. Historical records told of a prestigious hotel called the Balmoral House where out-of-towners would stay on the lake.

Bob Shanks, one of the oldest living residents of Earleton, recalls an old fish camp called Shipman’s Landing. He said it was a hangout spot in the 1930s featuring a bar and a dance floor on the water.

“It was a going thing for people to come out of Gainesville and go party on Lake Santa Fe,” he said.

A steamboat called the Alert shipped goods and people across the Santa Fe canal.

In “Bonnie Melrose,” a historical book written by Zonira Hunter, a resident of Earleton named Elizabeth tells of her time on the Alert.

“The Alert waited half an hour for us and landed us at the foot of the hotel grounds where we were invited by the proprietor to use the dining and clock rooms and broad piazzas,” Elizabeth said.

When hyacinths plants clogged the canal in 1907, the Alert was shut down and cars became the new mode of transportation.

Besides a few pages in the local history books, there aren’t many records of Earleton left. According to Shanks, many homes and the Balmoral House burned down in a large fire in 1900. So what is left of Earleton are the stories told by the living locals.

Shanks’ family moved here in 1949, when he was five years old, to escape the coal mining industry, he said.  He lived in what was the original post office and store, raising chickens on the 22-acre plot.

Shanks said he spent most of his time either on his farm, on the lake, or hunting and frog-gigging.

“One time, I saw this mom skunk and five babies. One was white, so I caught it and it sprayed me, and the mom sprayed me,” he said. “Boy did I get into trouble. I had to sleep in the garage for five days.”

Across the street from Shanks’ current residence used to live a woman named Ms. Thomas.

“I remember she had an old Donald Duck car, a four-door convertible,” Shanks said. “She wore a big brimmed hat, and she would put it on and you could see her putt, putt, putting down the road.”

Her two-story house was home to the post office during the Civil War. The house burned down around 1977, he said.

“Somebody set the house on fire. I won’t say who,” Shanks shared.

Shanks recalled two azalea nurseries that operated in Earleton, as well as pecan groves that were rented out. Picking pecans, done by hand, started in late September and ran through Christmas time, he said.

“Drive through Earleton and you will see the pecan trees still standing, over 100 years old,” he said.

The most excitement in Earleton came from the fish camps, Shipman’s Landing and Buddy’s Landing.

“Down at Shipman’s in the summertime, once a month, they held a fish fry,” he said. “All of the neighbors would come and bring a dish.”

“It started out with a tiki bar where you could ride your boat right up to the dock and hangout to get a bite to eat,” she said. “Then it changed hands and became a seafood restaurant. You couldn’t come in a bathing suit.”

“We went through a drought that year, everything dried up so there was no access to Buddy’s Landing, that’s what put us out of business,” he said.

From that point on, the post office became the last community area for Earleton.

Shanks’ wife Mary Ann managed the post office for many years, while he leased out the store next to it.

An older man known to Earleton as Mr. Frank took over the store in 1981. Montgomery said she took her kids to Mr. Frank’s store every Friday to pick up ice-cream and movies.

“Mr. Frank and a couple older men would be standing at the counter playing checkers and cussing each other out, accusing each other of cheating, and smoking cigars,” Montgomery said. “I mean it was just the worst environment to bring your kids in, but it was so fun and my kids loved them all.”

On the wall above his register Mr. Frank stapled a card with a two-year-old baby in diapers sitting down, and on the baby was a beard and a gruff face, she said.

“It said ‘Mr. Frank at age 2’ It was so funny because it fit him,” she said. “Earleton was never the same after we lost Mr. Frank.”

“One of the biggest differences on the lake is the decline of fish camps,” Bivens said. “When I got here there were five or six on Lake Santa Fe. The younger generation grew up and left, and people just don’t use the lake as much now.”

“When I was young, there were 15 of us that would catch the school bus up here,” Shanks said. “Now there is only one.”

Shanks attributed the decline of Earleton to one concept: time.

“It’s simple,” he said. “Everybody died and everything burned up.”

Cat is a reporter for WUFT News and Fresh Take Florida who can be reached by calling 954-657-3385 or emailing cgloria@ufl.edu.
Previous PACE Center Empowers Girls In Wake Of #MeToo And #TimesUp Movement
Next New AC Marriott Hotel Viewed As Positive Economic Impact By City, Brings Student Concerns