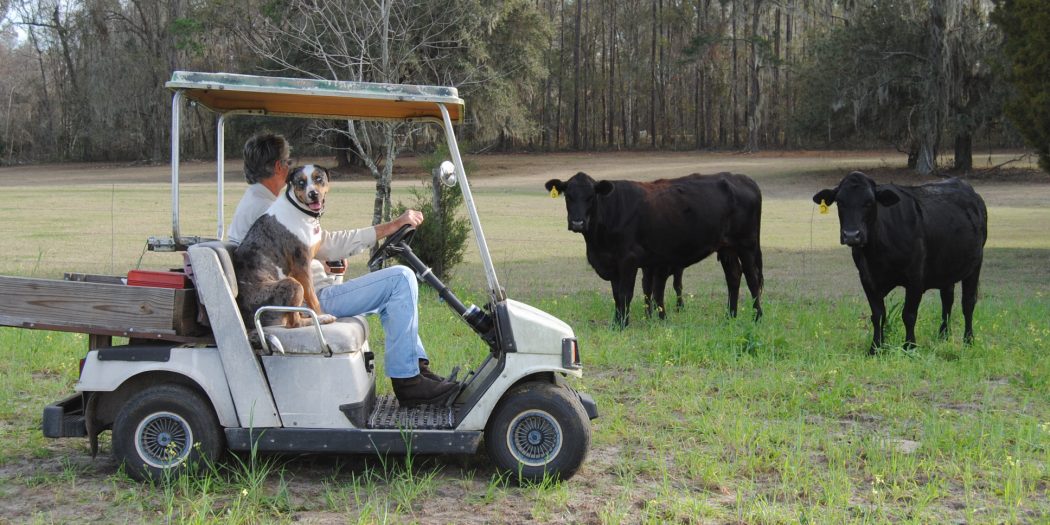 Have You Seen My Cow?

The small herds travel near highways and graze in the front lawns of neighbors — where  they don’t belong.

Jerome Feaster, 68, grew up in nearby Shiloh, Fla. He said wayward cows were not a problem 30 years ago. Roads were sparsely used, and all the neighbors knew whose cow belonged to whom and would just knock on their door.

As the years have gone by, those who haven’t grown up knowing dirt-covered jeans and boots have set up homes.

And when a cow gets loose, the “Yankees,” Feaster said, are confused.

Feaster races around his century-old family farm in his mud splatted golf car. Diesel, his icy blue-eyed Catahoula dog runs alongside. A routine the two go through every day.

They round the grassy perimeter of the 40-acre lot to herd Feaster’s nine cows — six calves and one black bull, who is a bit more stubborn.

Feaster works on his Florida pioneer farm in his spare time. He’s retired. The farm is seated in Marion County off of North Highway 329 in the town of Shiloh, a Micanopy Rural Free Delivery zone. Like others in the area, Feaster has known the farm his whole life.

Those new to the area may make a Facebook post about the cow or call local authorities, he said.

In Marion County, the sheriff’s office has an agriculture deputy to help reign in cows when called.

Cpl. Tim Ogletree was appointed to the position last year. He said it’s hard to track exactly how many calls the sheriff’s office gets about lost cows. But it happens often enough that he has a four-wheeler on the back of his truck to round them up.

Marion County has more than 3,500 farms and about 50,000 cows, he said. Most of the calls come from people driving by the highways and seeing the cows off the side.

The Micanopy area is split between Alachua and Marion counties. Each sheriff’s office has its own cow protocol.

It only takes about 20 to 30 minutes to get the cows back to their owners, Ogletree said. He just walks or rides the four-wheeler slowly behind them until they start walking back from where they came. The cows tend not to wander too far from home.

About a year ago, the sheriff’s office implemented an agriculture watch program. Roughly 150 farms have signed up so far to put signs in front of their property identifying themselves with an assigned number.

“We have lots and lots of farms in this county and we put a deputy out there dedicated Monday through Friday,” Ogletree said. “It’s definitely a problem here.”

Sometimes before the sheriff’s office is called, well-known community members try to help out.

Kevin Reddick, co-owner of Reddick Brothers Hardware, has lived in Micanopy for 48 years.

His father opened the hardware store in ‘73, and Reddick and his older brother Ken Reddick, 58, took over in ‘92.

Locals hang out and get their tool needs in the packed little shop off of U.S. Highway 441. Others also give the Reddick brothers a call when they see some cows out.

Most recently on the last week of January, about a dozen black cows were walking down 346 Road and someone called the store to get help, Reddick said. He tries to call some people who he knows own cows, but if he strikes out, he’ll call the county sheriff’s office.

“It’s just part of living in the country,” the 53-year-old said.

Annabelle Leitner, another Shiloh native, lived in the same house all her life and grew up with cows on the farm.

The 1980 UF alumna still remembers one of her most notorious bulls for escaping: B.B, which could stand for “Black Bull” or “Bad Bull,” she said.

“If you’re a farmer and you’ve raised livestock, you always try to help your fellow farmer,” she said. “Nowadays that’s not the case.”

Still, the farmers in the area try to lend a hand to one another and give the newbies tips on what to do.

Feaster said he feels fortunate to have grown up on a farm.

He still has his cows, bull, Diesel the dog, Chicco the cat, Kiwi the mull and Fancy the Mustang.

In small town living, everyone tries to pitch in, whether they know each other or not, especially when an animal gets loose, Feaster said.

“That’s what we’re here on Earth to do — help other people,” he said.