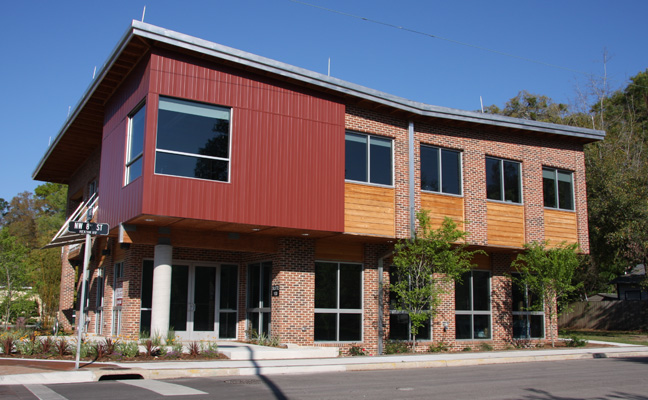 The CRA office building at 802 NW 5th Ave. in Gainesville. (Courtesy of CRA)

‘Y’all Better Work It Out’: Legislators Give Advice on Settling Gainesville CRA Dispute

A state representative had a message for Alachua County and the City of Gainesville on Wednesday morning.

To his feuding children, his wife would often say”Y’all better work it out,” Rep. Bob Cortes recalled, “because if it goes to daddy, you’re not going to like the outcome.”

Cortes, of Altamonte Springs, told leaders of the two local governments to work out a deal so that the legislature — “daddy,” in this case — didn’t have to decide for them. This session, House member Chuck Clemons filed a bill that would dramatically change who controls the Community Redevelopment Agency. The proposal is working its way through the House, with one more committee stop required.

It has the city on edge, because right now the city holds all seven decision-making positions on the agency board. The bill would cut that number to three, with the county taking the other four; according to representative Byron Donalds of Naples, the taxation and representation are not equal.

“It is clear that two-thirds of the proceeds in the CRA come from the general fund of Alachua County,” he said.

Lyons also touted some recent successes of the city-controlled CRA: “A former trash dump in the middle of downtown is now a Hampton Inn.”

And the site of Kennedy Homes, a housing project that burned in 2003 and was later demolished?

“A vacant parcel of land,” Lyons said, “is now under construction for affordable housing.”

It’s changing the fabric of some parts of the community.

“Our current police chief (Tony Jones) and I stood on the corner of where the CRA office building is now. It was the place where he dealt with his first murder,” Lyons said of the intersection of NW 8th Street and NW 5th Avenue.

Is the CRA control, though, an issue about which state government should decide? City commissioner Adrian Hayes Santos doesn’t think so.

“We should not be here today. This should be happening at the local level,” he said.

Commissioner Harvey Ward agreed: “I would encourage you to vote against this bill. It’s a bad bill, but there might be a good bill to be had.”

Then why haven’t city and county politicians — many of whom drove to Tallahassee just for a House Ways and Means Committee hearing — yet found a way to work it out? Representative Tom Leek of Daytona Beach had a theory.

“I think it is a truth that the willingness to compromise increases upon the precipice of extinction,” he said. “And so I’m not surprised now that the city and the CRA want to compromise on this issue.”

County commissioner Lee Pinkoson confirmed Leek’s thinking: “If this doesn’t go through, what I’m afraid is the motivation that has gotten them to this point may go away.”

The committee ultimately voted it through in a divided vote, but not before representative Joseph Geller of Dania Beach warned both sides to resolve their differences outside of the legislature. Geller voted against it.

“If this thing doesn’t get done this year, and comes back next year,” Geller said, “and it’s still not done, I’m going to be a lot more willing to step in and let the legislature wield a pretty big club on this.”

Clemons’ bill still has to go to the House Government Accountability Committee before it would move to the full Florida House. City and county officials are scheduled to meet Feb. 12 to try to work out the CRA issue.