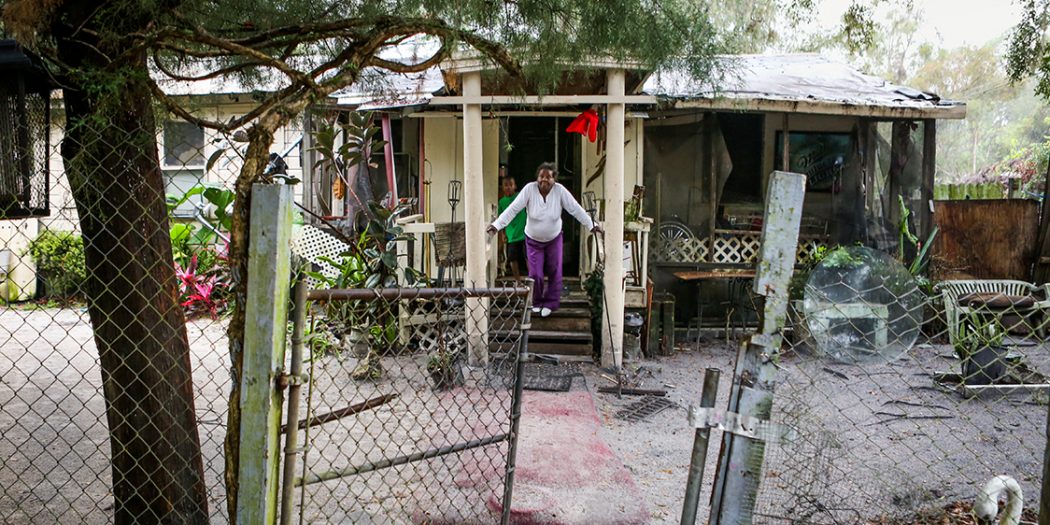 Runell Ricks stands on the front steps of her East Gainesville home, which has now been powerless for more than three months. (Photos by Emma Green/WUFT News)

When The Lights Go Out And Stay Out

Listen to our podcast on your phone: Apple Podcasts | Google Play

Updated, Dec. 28, 2017: In the hours and days after this story’s publication, readers and listeners called and emailed our newsroom asking how to help. Through a GoFundMe drive, the Rickses raised nearly $1,500 to repair the Hurricane Irma damage, including a $1,000 anonymous donation.

In response to our audience’s generosity, Shanite Ricks wrote on Dec. 28: “Just wanted everybody to know thank y’all for everything… it (means) so much to my mom much love and God blessed y’all.”

The power, Ricks said, was back on for the holidays.

Once familiar hallways and rooms navigable by instinct alone become dark, confusing labyrinths, their bright and warm colors reduced to flickers of detail revealed by weak candlelight. Heavy summer heat, usually kept at bay by the miracles of modern air conditioning, seeps into bedrooms, kitchens, and bathrooms. Air stagnates and seems to stick to your throat when you try to breathe.

Just over a week later, GRU had the number of their customers without power down to 349.

This story, though, is not about the people who lost power at the mercy of the winds and rains of a hurricane, but rather those who lost it by the decisions and keystrokes of men and women in an office building.

“It’s getting ridiculous. It’s cold nights, even though we’ve tested out kerosene heaters to keep warm. We do have running water, but we still arent’ comfortable and stable in our house because it’s getting expensive. We have to buy batteries nearly every day to keep the lights bright in the house.”

Those are the words of Shanite Ricks. She and her family have been without power for 96 days as of this writing. And counting.

Ricks lives in her mom Runell’s house in East Gainesville. Her mom, just shy of being old enough for Social Security benefits, works as a housekeeper at a nearby Econolodge. Ricks works at a daycare, and at home, she takes care of eight children — three of her own and five of her sister’s.

Irma tore off the Ricks’s weatherhead — that metal pipe sticking out of some houses receiving the powerline.

The power was still on, but the whole situation didn’t seem too safe.

“GRU came through here,” Shanite Ricks said, “looking at trees and powerlines and stuff. At that time, my mama notified them about this box and this powerline hanging down. (She told them), ‘Hey, I’ve got grandkids here, and I don’t want them to touch it and get electrocuted… The man notified GRU. They came out the next morning, he took the box out. We didn’t think it was going to be this bad… thought GRU was going to just click it on and go about their business.”

GRU refused to repair the damaged weatherhead so the power could be turned back on safely.

“It’s right at the top of the weatherhead. That’s where we tie into the customer services. If there’s damage to this part, that’s the customer’s responsibility. When storms occur, it’s very common for weatherheads to be damaged,” Shepherd said.

A functioning weatherhead and mount for the meter (called a meter can) are the responsibility of the customer. In fact, Shepherd said GRU personnel are not permitted, under NEC regulation, to repair a weatherhead.

“It’s a sensitive issue around storm time because customers have that assumption that we start right at the meter, and we don’t. That’s why we put this information on our website, just to make it clear to them.”

The Rickses were among those who missed the website and assumed GRU started at the meter.

This family of 10, unsurprisingly, does not have three grand ready to drop on repairs.

Ricks heard from a neighbor that FEMA had been doing some relief work around Gainesville. She gave them a call.

After two months, a FEMA representative showed up at their door. After appraising the house, the man approved the Ricks for assistance.

Just over seven hundred dollars made out for the purpose of rental assistance.

Expecting that to the beginning of the relief they needed, the Rickses distributed that money to friends and family who had helped them out in those two months, rather than spending it on repairs.

In the meantime, FEMA said they would send an application for the Ricks family to apply for aid.

Ricks sat in wait to tackle this task on top of everything else on her plate.

Then, a rather unexpected problem. A week passed. And then two, and then three. No application. FEMA has been quiet since then.

In early November the phone rang.

According to Ricks, GRU told her that due to her inactivity in power consumption she had to close her account and reopen it.

“We have three types of deposits,” Shepherd explained. “One is a deposit waive. That’s if their credit is good. One is a standard deposit ($270). That’s if they have OK credit or no credit. And the third is a full deposit. The full deposit is if they have bad credit history and we’re going to charge them two times the average usage at that particular location they’re turning on, or the standard deposit — whichever’s larger.”

So, in closing her old account her previous deposits for electric, water, and wastewater were refunded, totaling $748.27.

This was absorbed by a $938.81 unpaid balance on that account.

Runell paid the remaining $190.54, and the account was closed.

The new account was opened just for water and wastewater.

“It’s like saying you never had service with GRU,” Ricks said.

A GRU representative told Ricks that once the weatherhead is fixed, she will have to pay an additional $440 deposit before the power will come back on at all.

Another obstacle to overcome.

A couple of notes on this whole episode:

The Rickses were in debt before Irma, but they had the luxury of managing that debt in an air-conditioned house under electric light.

Incidentally, GRU has one other kind of deposit, called an additional deposit. Charged to existing accounts based on payment record, additional deposits may be up to three hundred dollars on top of a deposit paid at the beginning of services. With the costs racking up, the Rickses have to be aware of the risk that non-payments may have even more expensive consequences.

In any case, for the Rickses, the lights are out. And the house feels different.

The reality of living without power, long-term, has set in.

“We buy food, day by day. We get a cooler with ice in it and try to keep it cool… It’s like having a kitchen outside. That’s how we pretty much do it.”

The iron burner sits on the dirt in their front yard, connected to a blue rhino 5-gallon propane tank. Their kitchen is a gray folding table against the fence in the yard. It serves as both pantry and counter, populated by dishes, condiments, and a neat row of spices.

Eventually, this became the new normal.

“We have good days and we have bad days. The bad days we wish things could go back how they was. The good days we overlook it and say good things come to those who wait.”

Shanite Ricks believes God will deliver her, and that He would not hand her anything she couldn’t handle. She looks forward to the day when her work and God’s grace pays off. To her, anger and sadness are useless in getting her power back on. She tries to avoid them.

But she’s human, so they’re still there. Arguably, rightfully so.

“I don’t blame Mother Earth (for the weatherhead being down), but I blame GRU because I feel we shouldn’t be in a situation like this for this long, especially when we’ve been in this community for years and been dealing with us for years.

“Sometimes — but I don’t want people to sound like, ‘Oh yeah, she’s racist’ — but I sometimes feel like it’s a color thing,” Ricks said.

Ricks was quick to admit she didn’t experience any overt or direct racism with GRU.

But this story would be incomplete without at least mentioning that this happened to a black family living on the Eastside of Gainesville, a poorer area of town, historically underserved and the subject of long-term systematic racism going back to the founding of Gainesville.

“If she (my mother) was an old white lady, they might have helped her quicker than her being a black person,” Ricks said.

Questions of race, justice and utility policies aside, the fact remains there is a family of 10 in Gainesville who have lived without power for three months, with absolutely no end in sight.

Children take cold baths, study by an electric lantern and sit in their mother’s car to listen to music or watch TV on the small screen of her smartphone.

Shepherd from GRU says that helping one family could be the beginning of a slippery slope.

“If GRU was to come in and say, ‘We understand your troubles, we understand your issues. Let us fix it,’ there are probably five or six thousand that would have that same circumstance. We’re not electiricians, believe it or not. The regulatory restrictions keep us from working on the secondary. The secondary starts at that weatherhead.”

The above heat map shows where the October 2017 GRU disconnects were concentrated across Gainesville. The Ricks household is in the southeast area. (Data obtained via public record request from GRU)

Myasia is Shanite’s seven-year-old daughter. She has some thoughts on the situation.

“I wish the light would be back on,” Myasia Ricks said, “so we could watch TV and stuff.”

She and her family are surviving in this different place, but all they want is to find their way home and turn the lights on.

For more stories on the effects of Hurricane Irma on the region’s poor, don’t miss our Energy Burden series.

If you’re interested in sponsoring “The Point” podcast, write to us at news@wuft.org.

Luke is a reporter for WUFT News and can be reached by calling 352-392-6397 or emailing news@wuft.org.
Previous Alachua County Fire Rescue Delivers Toys to Family Whose Home Burned
Next Why Does This One I-75 Overpass Not Have a Sidewalk?

The Point, June 30, 2022: A Second Day Of Hearings Begins In A Case To Temporarily Block Florida’s 15 Week Abortion Ban

The Point, June 28, 2022: Middle And High Schoolers In Alachua County Will have To Wear Clear Backpacks Next School Year

The Point, June 27, 2022: Protesters Locally And Across The State Are Speaking Out Against Last Week’s Roe V. Wade Overruling