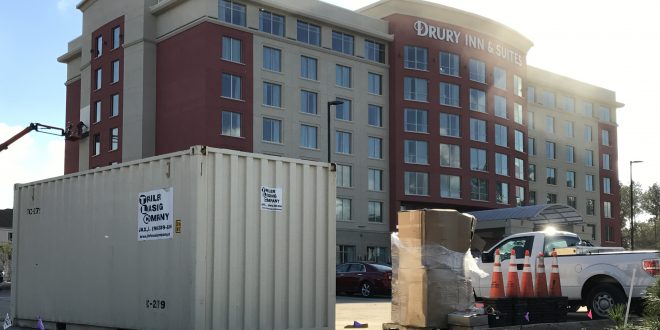 Drury Inn & Suites Gainesville, on Southwest 40th Boulevard, is set to open on Jan. 1, 2018. It's one of nine new hotels expected to soon open their doors in the city. (Isabella Sorresso/WUFT News)

Hotel Boom Or No? Either Way, Several More Planned For Gainesville

In 2016, Elinor Robin finally made the move from Miami to Gainesville with her husband after a decade of traveling between the two cities — for work in the former and for the enjoyment they found in the latter.

But when she told others where she and her husband were moving to, they showed surprise because, to them, Gainesville doesn’t ring of destination.

“Often when I tell somebody that I live in Gainesville, they look at me like, ‘What? That’s like in the middle of nowhere. What’s there?’” the divorce mediator said. “They don’t even realize what a wonderful city this is. We have so much here: museums, theater. There’s so much going on here that isn’t in other places.”

She said she loves Gainesville’s character and its small-town feel. But she’s also OK with its expansion because the new hotels that are coming with it mean out-of-towners, like she once was, will be able to more easily find accommodations.

The city’s tourism numbers are indeed growing, said Sean Plemons, content manager for Visit Gainesville, the city’s tourism and marketing arm. But a frequent complaint among them, he said, is the hotels booking up.

“There are definitely weekends and weeks out of the year where hotel rooms are extremely limited — typically home football games, Gator Nationals and other [University of Florida]-related events,” Plemons said.

Hence the nine hotels in the works, all of which are expected to open over the next year. They and their addresses are:

The Drury Inn and AC Hotel are scheduled to open on Jan. 1 and Jan. 31, 2018, respectively, while specific opening dates for the other seven weren’t immediately clear.

Together, the new hotels wouldn’t be considered a “hotel boom,” Plemons said. Rather, they’re merely part of a state- and nationwide trend for new hotel planning and construction, he said, especially for limited-service hotels, or those without a commercial kitchen or conference room.

When finished, Plemons said, the new hotels will increase the current number of rooms in Gainesville (less than 5,000) by about 1,000 — a boost of 15 to 25 percent.

“That’s kind of on par” with hotel additions across the country, he said, “so that’s not really uncharacteristic.”

Robert Plutto, the AC Hotel’s general manager, said he believes that Gainesville is becoming more and more of a destination but that it could use “some unique and modern hotels.”

The AC Hotel is connected to The Standard apartment complex next to the University of Florida, with the hotel’s main entrance on Northwest 14th Street. It will have 10 floors, 144 rooms, a rooftop pool, a rooftop bar, a lobby bar and a fitness center.

“There’s not a hotel that will be like it in the market,” Plutto said. “It gives people a luxury outlet to choose from that may have not been there before in the past.”


Gainesville’s growth as a destination is one of the main reasons the AC Hotel is being built, he said.

In other words, Plutto said, three-fourths of Gainesville’s hotel rooms, on average, have an occupant at any given time. The typical average is 70 percent, meaning Gainesville’s demand is high, he said.

As such additions pop up, Gainesville resident Jay Jordan wrote in a Facebook discussion that he hopes city officials will simultaneously improve public infrastructure. For example, he said, streets and roads need to be repaved and even built new for efficiency.

“I’m from up north and moved here two years ago, and it seems as if a 5-year-old did the mapping for the streets,” Jordan wrote. “No interconnectivity between streets within city. The worst traffic I have ever seen and it’s a really simple fix.”

But city Commissioner Adrian Hayes-Santos said he doesn’t think that Gainesville’s present roads are ill-equipped to handle traffic from visitors.

“I think our city’s infrastructure meets the needs for these hotels,” he said in a phone interview. “I don’t think there will be any adverse effects with the addition of the hotels.”

Nevertheless, the city is always looking for ways to improve, Hayes-Santos said. For example, he said, the city is hoping to work toward lessening traffic on main roads, such as Southwest 20th Avenue, Northwest 34th Street and Archer Road.

On the hotels, Hayes-Santos said he sees them as representative of Gainesville advancing as a place for those looking to get away.

“I think it shows we’re heading in the right direction,” he said, “that people want to come visit our city and experience the great things we have here.”

Isabella Sorresso is a reporter for WUFT News. She can be reached at 727-207-7390 or via email at isorresso@ufl.edu. Follow her @isorresso on Twitter.
@@isorresso
Previous Afternoon News in 90: Dec. 6, 2017
Next Alachua County Commission Takes First Step to Fixing Legacy Flood Issues