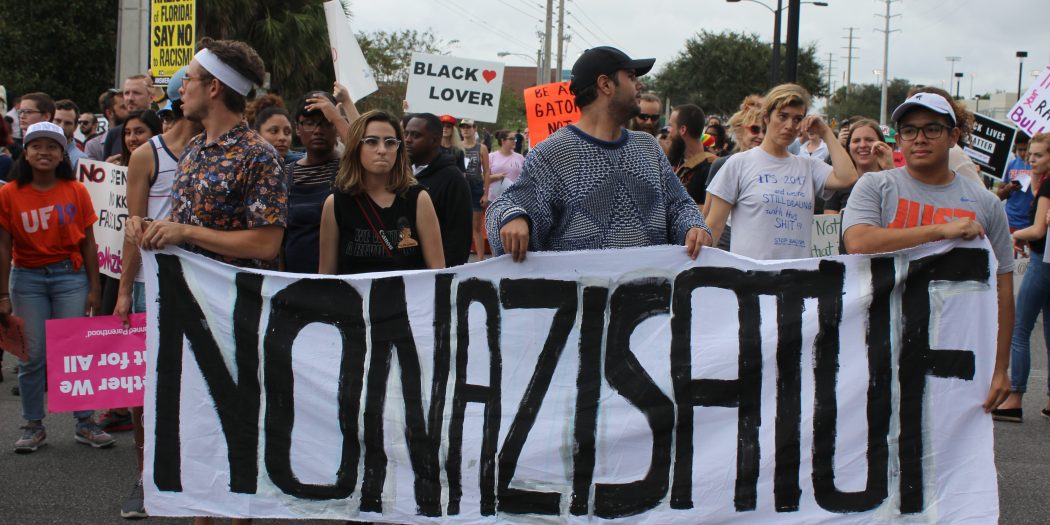 When Richard Spencer speaking at UF first became a possibilty, a Facebook event titled “No Nazis at UF” was created. On Thursday, the leaders of that event led protesters down SW 34th St. to the Curtis M. Phillips Center. (Christy Pina/WUFT News)

The cost for security that UF had to pay to ensure safety on campus during the event was previously estimated as more than $500,000.

An official report of all Spencer-related expenses won’t be available until the next few weeks, said City Manager Anthony Lyons. Some commissioners, like Harvey Budd, expressed interest in searching for ways for the city to be reimbursed for part of the cost, either from UF or the state government.

What else we learned:

What’s next? The commissioners unanimously agreed upon the motion to have Lyons prepare a report on the expenses surrounding Spencer’s visit. Following the presentation of this report, commissioners will assess whether or not to seek reimbursement from another party and determine how to better handle a scenario like this one in the future. Poe believes it is a situation that will inevitably present itself again. “I do believe that this will not be the last time we’re confronted with this,” Poe said.

Jessica Giles is a WUFT reporter and can be reached at jgiles1597@gmail.com or 386-717-2378
@@jessica_giles_
Previous Gainesville RTS Audit Shows Variances Between Reported And Estimated Revenue
Next Families Of Veterans Find A Home Away From Home At Fisher House