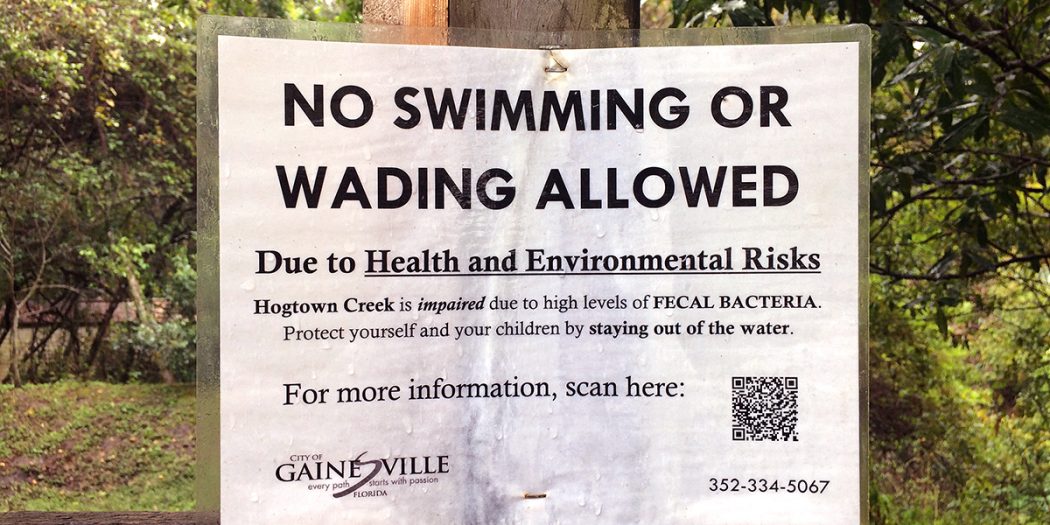 Sign at the entrance of Alfred A. Ring Park trail. Park visitors often ignore these warnings in search for shark teeth in the creek. (Claudia Perez Brito/WUFT News)

Visitors to city parks put their health at risks when they explore local creeks and ignore signs placed near trails that warn people to not enter the water due to “health and environmental risks.”

Director of the Environmental Protection Department for Alachua County, Chris Bird, said Gainesville’s urban creeks have a continual problem with bacterial contamination because of runoff from the urban areas surrounding them. The most common bacterial contamination he looks for is e.coli because it can indicates human and animal waste in the water.

“It’s got to do with the fact that there are a lot of sources of bacteria, dangerous bacteria that wash into the creek,” Bird said.

Bird explained the best way to think of the creek is to imagine mopping the floor and then squeezing out the dirty water. He said that is what goes into these urban creeks.

Pet feces also pollute the water when people don’t clean up after their animals, and nearby sewage leaks that also contribute to the bacteria levels in the creeks.

“They [people] think because they can’t see the bacteria they are safe,” Bird said. “We know people are going to ignore our advice.”

Geoffrey Parks, nature operations supervisor for the Alachua County Parks, Recreation and Cultural Affairs Department, said they first learned about the issue when Hogtown Creek, Tumblin Creek and Sweetwater Branch were categorized as “impaired” due to high levels of fecal coliform bacteria by the Florida Environmental Department of Environmental Protection in the 2007 Orange Creek Basin Management Action Plan, a report for the purpose of monitoring and improving water quality.

The first time Jessica Phillips went, she was a teenager and accompanied some friends.

“As long as I can remember it was always something we heard people did,” the 33-year-old said. “So it was never a major concern or we didn’t understand how bad it was.”

Phillips isn’t the only one to enter the creek. Residents often go specifically for the purpose of looking for shark teeth.

Allan Bacon, an assistant professor of the soil and water sciences department at the University of Florida, said the reason for the abundance of shark teeth in Hogtown Creek is due to a topographical area in Florida, called the Cody Scarp. This escarpment contains a geological layer, the Hawthorn Formation formed 5 to 22 million years ago, and water bodies like Hogtown Creek flow atop this layer that contain marine sediments.

Parks said he’s seen people walk past the trail by his office at Loblolly Woods Nature Park with evidence that they entered the water.

Parks said that people are simply not aware of pathogens that exist in the water.

“These creeks are under a lot of stress,” Parks said. The stress is due to chemicals and sediments that enter the water from the surrounding urbanized areas.

“It’s a red flag when I see people bring groups of children to the creek.”

Parks said his main concern is when people bring children into the creek. In one case, he saw a daycare group with swimsuits and towels with the intent to enter the water.

“It’s a red flag when I see people bring groups of children to the creek,” he said. “It’s fine if adults make their own decisions, but you can’t make these decisions for other people’s children.”

Parks said children aren’t like adults on hygiene issues.  He said children do not understand they shouldn’t touch their eyes or put their hands in their mouths once they’ve come into contact with the water.

Chris Bird, director of the Environmental Protection Department for Alachua County, said there haven’t been any reports of someone becoming gravely ill but people can still get infections, especially if they have cuts or open wounds. He advises that if people have come into contact with the water they take hot showers afterwards and shouldn’t touch food until they wash their hands.

The Alachua County Parks, Recreation and Cultural Affairs Department works with the Environmental Protection Department to monitor bacteria levels, they have plans for permanent signs to be put up.

“It’s something we want to put some real consideration into when it comes to designing them,” he said.

Parks said the reason no concrete plans for signs have continued is because any signs are often vandalized.

Another concern for Parks is that the creeks are usually a boundary for the park, so when people go off the trails to go into the creek they are trespassing onto private property.

“It’s just not a neighborly thing to do,” he said.

Parks said that when people walk over the creeks they are also contributing to the erosion of the creek banks.

“Creek banks are not resilient to people going on them,” he said. “When people do that they are eliminating vegetation at the banks.”

He said the issue is partly about educating people. The Environmental Protection Department is working on developing some courses with the Morningside Nature Center staff to educate people on issues about water pollution to try to minimize the amount of human pollution that ends up in the creeks.

“A lot of the time people are not aware of the issue,” Parks said. “Our primary tool is interacting with people and educating them.”

Claudia is a reporter for WUFT News and can be contacted by calling 352-458-4434 or emailing cperezbrito@ufl.edu.
Previous City Commissioners Discuss Transferring Gainesville Power Lines Underground
Next Dentist Office Donates Halloween Candy To Troops