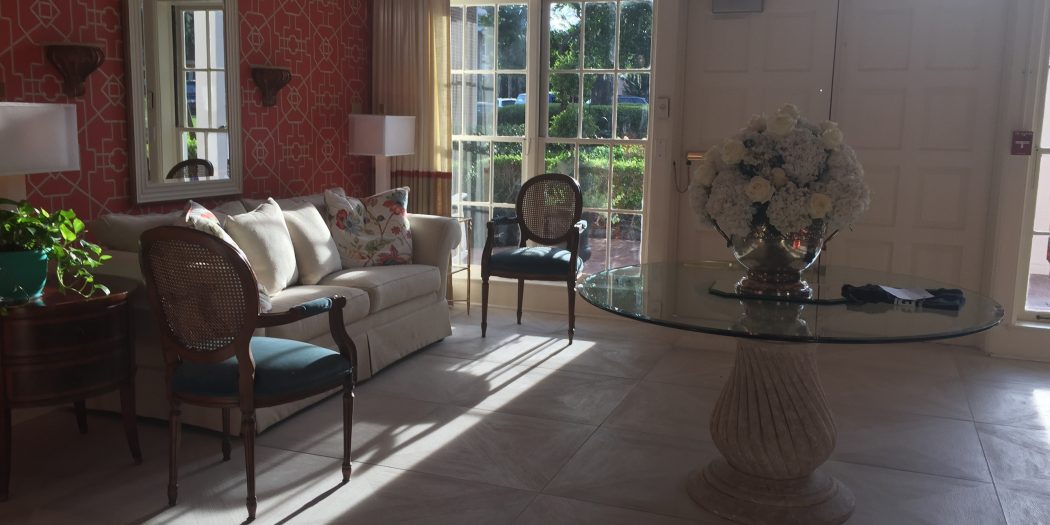 Off of West Panhellenic Drive on Sorority Row, Alpha Omicron Pi sorority house experienced severe water damage. Women living in-house were forced to relocate until repairs were finished. The house, built in 1948, is home to 50 women.

Alpha Omicron Pi’s Property Manager Cassidy McKenna said that the issues began the night of Sept. 10 and into the morning of Sept. 11. Due to the heavy rain, she said the front porch collected enough water to seep into the foyer. It didn’t stop there.

“Because of the hurricane we ended up having bad plumbing issues,” said McKenna. “Our back hallway flooded from the plumbing.”

Cheyce Bachelor, member of Alpha Omicron Pi, said a lot of the women were still staying in the sorority house while Hurricane Irma hit, which luckily meant they could help reduce damage to the inside of the house.

“They were able to help combat the flooding with towels,” Bachelor said.

McKenna said they made the decision on Thursday, Sept. 14 to relocate the women living in-house to The Holiday Inn for four days and three nights so that the demolition process could take place. The Holiday Inn was already largely booked due to Irma, so many of the women relocated to stay with friends.

Cheyce Bachelor said meal services were cancelled for the week after Hurricane Irma until plumbing was fixed and the sorority house was safe to occupy.

“Our house mom found an alternative way to get meals to us,” she said. “The chefs actually cooked out of a rented food truck, which I’m sure wasn’t the easiest thing to do for them, so we were all very appreciative of the effort put into making sure we still got each meal.”

In-house women were safe to move back in on Sept. 17 and meal services resumed the following day, McKenna said.

“We had lights, running water and hot showers, but our kitchen and air conditioning didn’t work,” said Murphy. “We had 7 percent power.”

Thankfully, she said no one had to evacuate and dinner services were able to resume later that week.

Other sororities faced little to no damage, said Murphy.

Delta Delta Delta member Sara Walbrecht said the sorority house had no damage or power outage during or after the hurricane. Delta Delta Delta and Delta Zeta are also located on Sorority Row off of 13th Street.

UF’s Alpha Omicron Pi chapter paid for damages and hotel expenses, said McKenna, but the executive board is planning on sending the bills to Alpha Omicron Pi’s National Headquarters.

UF Panhellenic President Devon Leasure could not be reached for comment to discuss possible reparations.

As for handling future hurricanes, McKenna said sandbags will definitely be useful for their front porch.

Jennie Mason is a reporter for WUFT News and can be contacted by calling 727-417-9550 or emailing jmason12@ufl.edu. You can follow her on Twitter @jennie_mas.
@@jennie_mas
Previous In Archer, Stalled Plan For Wastewater Plant Still Causing Rifts
Next Felony Charges Recommended Against Nine Gator Football Players