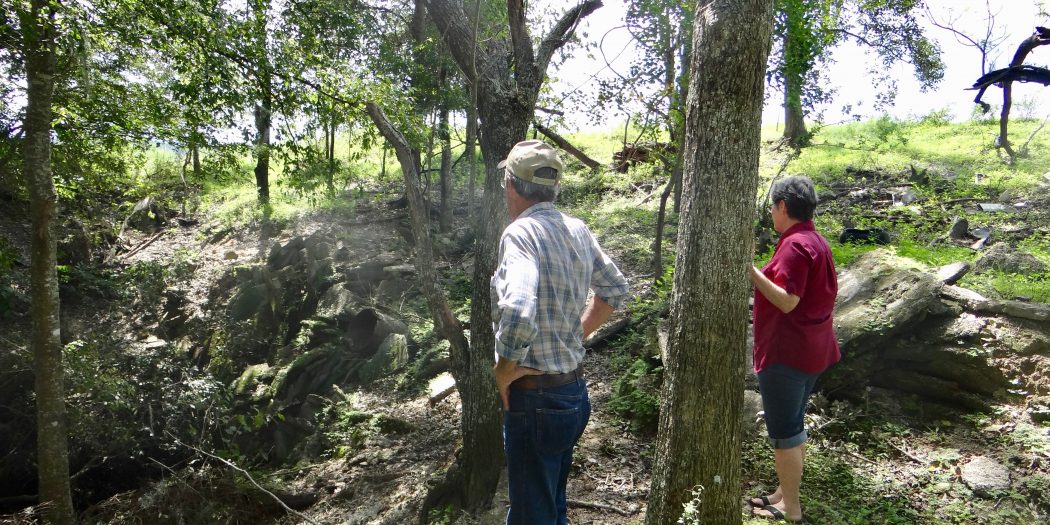 Frank and Sue Batey look down into a large sinkhole on their property. (Jake Best/WUFT News)

For the city of Archer, a plan to build a wastewater treatment plant has been clogged by years of debate, inability to find adequate land and, recently, a battle between the city and one local couple.

Archer, a rural community 15 miles southwest of Gainesville, has been discussing the idea of constructing the plant for more than 25 years, said Zeriah Folston, Archer’s city manager.

Currently, the city operates on septic tanks, Folston said, which collect and transfer wastewater for treatment.

However, he said this practice requires more land, as the tanks are large, and many businesses shy away from coming to Archer because this requirement for more land is costlier.

A wastewater treatment plant would eliminate this need, he said, making the city more attractive to businesses and potential homeowners alike.

As the city considers various plans, the costs of the project are not yet known, but he said he expects the city will be able to afford it through grants from the Florida Department of Environmental Protection and the USDA.

However, as the city has aimed to move the project along, it has run into unexpected and passionate opposition: Sue and Frank Batey.

The Bateys said they have been in Archer for decades. Frank Batey lives on the same land he grew up on, and his roots in the area go back six generations. He said he knows the area “like the back of my hand.”

The couple’s property is across the street from the Equigen site, 74 acres purchased by the city in October 2014 and a possible future home for the treatment plant. (Equigen is the name of the site’s former business, an equine reproduction center.)

And ever since the purchase, they’ve been fighting the city.

The Bateys said the city bought the Equigen site, which is located outside of the city limits, without personally notifying them. They said they found out about the purchase only three days before the City Commission gave its approval that same October.

They said they were hurt by the lack of transparency, a feeling that lingers three years later.

“This has totally consumed our life,” Frank Batey said. “You don’t know how this has upset me. I had no problem with anyone in Archer ever, including my family, until this came along.”

“It has split this community. … It’s absolutely terrible.”

The city also misled the former owners of the Equigen land, Heather Greaves and Dr. Vickie Harvey, about its intentions, Greaves said.

Greaves said she and Harvey moved to Redding, California and the Orlando area, respectively, and they had left sale of the Equigen site to a realtor.

Greaves said neither their realtor, nor Dr. Harvey or she knew of the city’s intentions, instead being told the property would be used for some city office space and a park.

“If we had known the city of Archer intended to build a wastewater plant on the property, we would not have agreed to the sale,” Greaves said via message.

Once the city commission approved the purchase, Sue Batey joined the city’s sewage committee to keep up the fight from the inside, she said.

Frank and Sue Batey said they are not necessarily opposed to a wastewater treatment plant being built in Archer. Rather, they just don’t want one right across the street.

“We’re not just fighting it because we don’t want Archer to get it,” Sue Batey said. “This is not the place to put it.”

But the city doesn’t appear to be budging.

The city government has an obligation to Archer’s residents to move ahead with the project, no matter what site is eventually chosen, Folston said.

The Bateys said they are concerned about their property value decreasing and the area’s vulnerability to sinkholes.

Their property has numerous sinkholes, including one dating back 60 years, they said.

They have hosted several county officials to survey their property to see the sinkholes, and they said no one had known about the area’s vulnerabilities before being shown by the Bateys.

“All this land in this area over here is kind of like building a swimming pool on an eggshell,” Frank Batey said.

In the event the Equigen site is ultimately chosen for the treatment plant, the Bateys said they are ready to keep the fight going.

“We have engaged an attorney,” Frank Batey said, “because our land will be of no value at all. It’s horrible to have to think like that. It makes me sick to my stomach. It’s so foreign to me to be adversarial. It’s just not in my character.”

Perhaps to the Bateys’ benefit, the project does appear stalled for now.

Folston added the project to the City Commission’s Sept. 18 meeting, hoping to nudge it forward. However, as has been the case for years, it is still merely a discussion item.

At the meeting, the commission members debated the pros and cons of three potential plans to construct the plant. In the end, they were unable to recommend one plan over the others, eventually coming to the consensus that all three options should be explored further.

The first option: move forward with the Equigen site, despite concerns over the location and lawsuit threat from the Bateys.

Commissioner Joan White said because the previous commission has already made the decision to purchase the site, the city must continue to explore the option.

“This was dumped in our laps,” she said. We don’t have a choice anymore.”

The second option: swap the 74-acre Equigen property to local business owner Melvin Lauderdale in exchange for his land, which has 30 acres that could go toward the plant and is in the northeast section of the city, which the commissioners agreed is a better location.

Folston said his land is closer to projected growth in the city, which he said is forecasted along Archer Road.

At the meeting, Folston laid out Lauderdale’s two offers to the city. The first one offers to swap the 74-acre Equigen site for 30 acres of his land, plus a $50,000 contribution to the city to construct a road to his current land.

The other Lauderdale proposal offers to swap the Equigen site for 42 acres of his land.

Despite his stated preference for the location of Lauderdale’s land, Folston did not recommend either of Lauderdale’s proposals as they are, saying neither benefited the city enough to move forward.

After debating the Lauderdale option, the commission voted 3-1 (with one absence at the time) in favor of sending a letter to Lauderdale with a revised offer. While this vote does not approve of the land swap, it means an offer letter will be sent to Lauderdale, despite Folston’s belief that he will not accept it.

Mayor Corey Harris said he wants to ensure the city receives a fair, value-for-value trade, especially because of the how much larger the Equigen property is compared to Lauderdale’s.

“It’s the best long-term decision for all of the stakeholders,” Hope said.

The third option, which the commission has discussed in the past involves the city building a treatment plant together with the nearby city of Newberry.

The city’s outside legal counsel, S. Scott Walker, said Newberry’s commission has placed building the wastewater plant near Archer close to the top of its legislative agenda. This fact surprised the Archer commissioners because they thought Newberry wasn’t interested in discussing this issue.

In light of Newberry’s interest, Archer commissioners voted to have Folston explore the potential joint venture, so long as Newberry sees it as an equal partnership, rather than treating Archer as a customer of a Newberry plant once constructed.

In the end, the city could not recommend one option over the others, instead voting to continue debating all three options further.

‘We Have to Move Forward’

Throughout the meeting, as the commissioners continually expressed their hesitations, Folston reminded them of the urgency of the project — both in terms of securing funding and keeping their promise to construct the plant.

“It’s one of those things that kind of keeps you up at night sometimes because you’re so close,” Folston said before the meeting. “It’s been a passion since I’ve been here because so many citizens — black, white, rich, poor — want to see this project happen.”

Archer resident Linda Kasicki, who attended the meeting, said she remembers the project being discussed ever since she moved to Archer 27 years ago.

She said she is in favor of the project, no matter where it is built, and she hopes those who are against the project can see how it will benefit everyone long-term.

“It’s not only a sanitary thing, I think it’s going to be a necessity in today’s world,” Kasicki said of the plant. “I don’t care where they put it as long as the people can afford it.”

Kasicki said she does think the city can afford it, believing the cost would be minimal to Archer’s residents.

Mayor Harris said some citizens are opposed for reasons different than the Bateys’ — namely, the growth that such a plant would represent — but he thinks it’s possible to grow while also retaining the appeal of a smaller community.

“I still think you have some people that would like to keep Archer relatively small,” Harris said, “and they see that any potential growth would prevent Archer from being that quaint community that they’ve grown to love.

“I think we can control growth in the sense that we can keep that same, small-town feel but have additional resources come to the area, like businesses to create jobs.”

Eventually, regardless of any and all reluctance, one plan will need to be approved, Harris said.

“Our hands are pretty much tied at this point,” he said, “but we have to move forward with something.”

Folston said he is committed to seeing the project through, especially because the city has been waiting on it for decades.

“I’m to the point where, now, it’s now or never — not just for me, but you’ve had citizens waiting on this for over 25 years,” Folston said. “It’s time to get it done.”

“If we make this happen,” he added, “this will be probably the greatest news in the history of Archer, probably since the founding of Archer.”

Jake is a reporter for WUFT News and a third-year journalism student at the University of Florida. He grew up in Roswell, Georgia, and has a passion for writing, politics and sports. He can be contacted by calling 770-342-9339 or by emailing jpb1997@ufl.edu. You can follow him on twitter @jacobpbest.
@@jacobpbest
Previous Florida Voices: A Florida Student’s Memoir of Growing Up In Post-War Vietnam
Next UF Sorority Houses Faced Varying Levels Of Damage From Irma