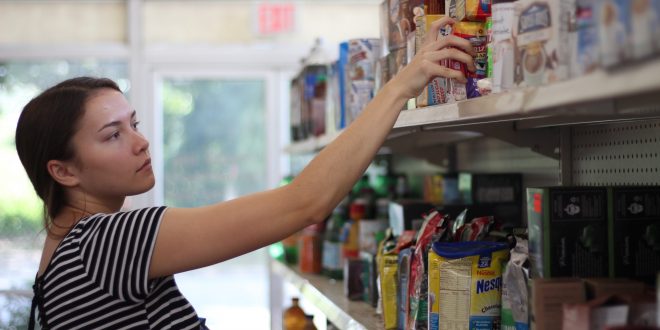 Bread of the Mighty Food Bank volunteer Kimberly Svatos helps shelve donated food items on Wednesday. Bread of the Mighty and other Gainesville food banks and pantries are accepting both perishable and non-perishable items that may have been stockpiled in preparation for Hurricane Irma. (Alexandria Ng/WUFT News)

Floridians plowed through grocery stores two weeks ago in preparation for Hurricane Irma.

If they want to take them back, they’ll get a full refund at their neighborhood Publix store, but the returned groceries, including some non-perishable items, might not return to the shelves.

No perishable products, including produce, milk and eggs, can be resold, Publix spokesman Dwaine Stevens said.

Meanwhile, non-perishable products, including most canned and box foods, are assessed before possibly being put before customers again. Store associates inspect the product to ensure, for example, that it is unopened and unbroken.

If the product does not meet Publix’s product standards, Stevens said, it is thrown away.

“With customer safety as our primary concern, we have the highest of time and temperature standards,” Stevens wrote in an email to WUFT News. “And it becomes difficult to determine if those standards, and in turn our customer’s safety, has been compromised once the product has left the store.”

Meanwhile, local food banks and pantries are accepting all items, including perishable ones.

Bread of the Mighty Food Bank, on Northwest 10th Avenue in Gainesville, has a 700-square-foot cooler in which it stores donated produce, frozen foods, eggs and milk.

“People think the bread is old bread, but it’s not,” she said. “The bread on the shelf now will be removed and boxed and sent out to the community tomorrow, so hopefully somebody gets to use it before it goes bad.”

If the food does end up expiring, it’s given to local pig farmers to feed to their pigs.

“The pig farmers will come and pick it up so it doesn’t end up in landfills,” Griffis said.

For non-perishable items, Bread of the Mighty holds them even past the “best by” date listed on the packaging. But the food bank still follows the regulations set by Feeding America, a nonprofit food bank network based in Chicago.

“Sometimes when the can says, ‘Best by a certain date,’ it’s actually still good for another six months, sometimes up to a year,” Griffis said.

One of the ways Bread of the Mighty distributes its donations is through family food boxes, which feed a family of four for three days.

However, if the food bank doesn’t have the necessary donations from outsiders for the boxes, the organization spends $10,000 to $40,000 per truckload to buy its own products to fill them.

The Salvation Army and St. Francis House are also accepting both perishable and non-perishable items for their food pantries.

Both of these locations serve fresh, hot meals to the homeless on a weekly basis, so perishable items are used shortly after being donated.

“We serve a lot of families with children, so we want a well-rounded meal,” said Kent Vann, the homeless shelter’s executive director. “We always need canned food, vegetables, meat, but we also take items like milk and eggs.”

As Hurricane Irma passed over Gainesville, St. Francis House took in an additional 200 people over three nights and provided them with food, Vann said.

The Salvation Army, on University Avenue in Gainesville, hosts a feeding program in which it serves breakfast every Monday and dinner every Friday.

“We have people who may have been trying to make ends meet as it was before the storm,” said Hank Harwell, a Salvation Army corps officer. “Now [that] the storm has occurred, they have to make repairs to their home, so money they may have allocated to other things are going to covering this.

“And that puts them behind.”