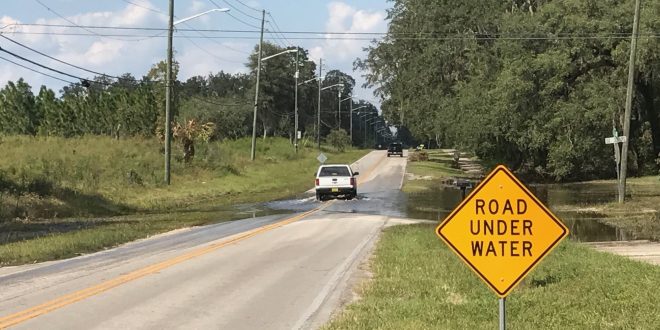 Water leftover from Hurricane Irma along Southeast 15th Street in Gainesville on Tuesday. As a result of the excess water around the county and state from the hurricane, residents can expect to see a dramatic increase in mosquitoes in the coming weeks, experts say. (Jessica Giles/WUFT News)

Deona Snyder’s yard has been overrun with blood-sucking insects ever since Hurricane Irma flooded her backyard.

“I moved one of the plants, and there was like a million mosquitoes in that plant,” said Snyder, who lives on Northwest 19th Lane in Gainesville.

As a result of the standing water left behind by the hurricane, Alachua County residents can expect to see a dramatic increase in mosquitoes in the coming weeks, experts say.

“They’re going to start coming on pretty strong,” said Phillip Kaufman, a professor of entomology at the University of Florida.

The city is working on spraying efforts, but instead of waiting, Snyder took matters into her own hands. She bought a $60 insect fogger, a propane-fueled machine that heats up insecticide and dispenses it as thick fog to kill mosquitoes.

Snyder said her insect fogger is doing more to curb the mosquito population than the city has.

“I haven’t seen the city doing anything about them,” she said.

The city’s mosquito-control program has received numerous complaints about the pests following Irma, said Chip Skinner, a city spokesman. In response, the city pulled mosquito-control employees from its Irma recovery teams starting Monday to allow them to respond to calls on an individual basis.

In addition, nightly citywide spraying will begin soon, Skinner said. But he didn’t know exactly when.

So far, Alachua County hasn’t had any reports of mosquito-transmitted diseases following the hurricane, but residents should still take precautionary measures, Skinner said.

“People just need to be aware of any standing water around their house” because larvae could be developing in it, he said.

Although mosquitoes are already common in Florida, flooding provides breeding grounds for the pest to lay eggs in, Kaufman said.

Kaufman recommended dumping birdbaths, toys, buckets and other containers that have collected water.

Also, mosquito dunk tablets can be placed in the collected water to kill the larvae, and adulticide can be sprayed to control the adult population, he added.

But mosquitoes that lay eggs in floodwaters are generally more difficult to get rid of because of the vastness of the water, he said, so residents don’t have go-to options for eradication. And people who live in unincorporated areas are at a disadvantage because they can’t utilize Gainesville’s mosquito-control program.

“Oftentimes, we see the rural residents having more of a problem than the urban residents,” Kaufman said.

One thing Kaufman said all residents can do to protect themselves is wear a repellent that contains DEET, a chemical that wards off biting insects.

It’s a precaution Snyder said she has already been taking.

“I literally spray myself probably like four or five times in a work day.”