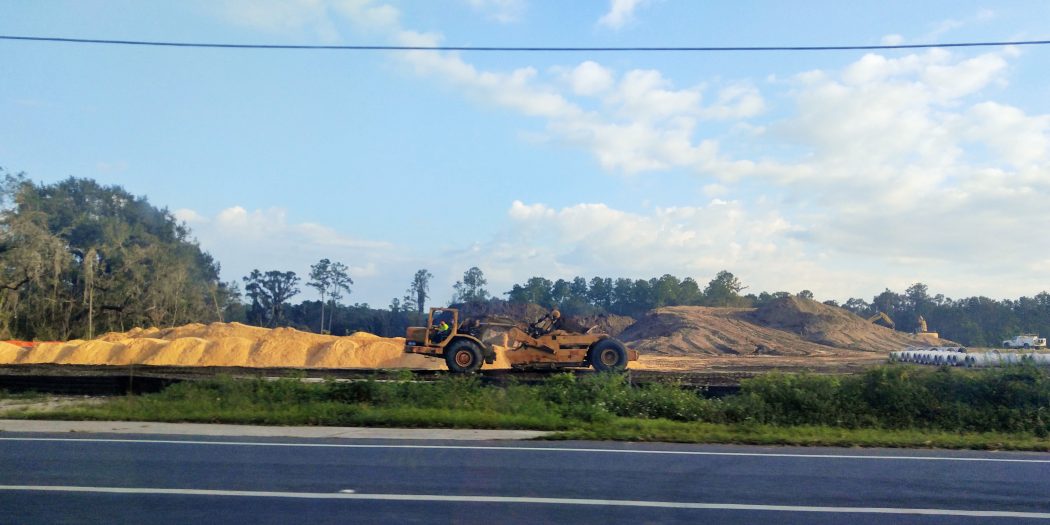 Residential areas have been developing in West Gainesville for many years, but as new planned neighborhoods are underway, some residents in the area are worried it is too much.

Traffic on those streets have always been a problem due to the close location of four schools (Fort Clarke Middle School, Meadowbrook Elementary School, Hidden Oak Elementary School and Santa Fe College). However, residents in the area are worried that the new wave of people the apartment complexes will bring will make the traffic worse.

The entire Park Avenue Apartments complex area will include 298 multifamily apartments and 14,000 square feet of a commercial component. The apartment buildings were completed last fall with many now already occupied. The first phase of the commercial aspect of the project is almost done, said Christine Berish, planner at the Alachua County Department of Growth Management.

The 23 West Apartments complex will be a multifamily housing development with 174 dwelling units and include a retail, commercial and office component all on 21.76 acres. The construction for the apartment component began once Viking Companies received the permit on July 25.

“We received a lot of calls once they started moving dirt,” Berish said, when talking about the 23 West Apartments construction site. “That development has always had neighbors interested on what’s going on that property.”

The Alachua County Department of Growth Management received some calls from residents who were excited to see a new residential development nearby and some who were concerned about traffic, vegetative buffers, tree removal and how the development will effect drainage in the area, Berish said.

Tim Sorel, associate professor of telecommunications at the University of Florida, is one of the residents who is concerned about the new developments. He has been living in the 32606 area since 2005 and currently lives in the Carriage Way neighborhood near the 23 West Apartments construction site.

“I think (the area) has developed some. The planned neighborhoods that were already there kept growing a little bit, but I think it was growing at a fairly reasonable rate,” Sorel said. “I didn’t think it was unreasonable. I think this new development is unreasonable and, you know, it’s frustrating.”

Sorel has to drive on Northwest 23rd Avenue to pass the 23 West construction and deal with traffic on the roads every time he wants to go anywhere. “That’s our only way out of our neighborhood,” he said.

“It’s a problem. It’s a problem,” Sorel said. “They just keep kind of building neighborhoods with no real infrastructure to support them.”

Lynn Jarrett, a water resource engineer at the Program for Resource Efficient Communities at UF, has been a resident of the area for almost 20 years and lives in the Huntington neighborhood off of Northwest 39th Avenue near Park Avenue Apartments.

“I have been watching it being built,” Jarrett said. “In general, I do approve of the mix use kind of development. They’ve got different apartments and commercial space and I like that idea, and they are building it along relatively major highways. I’ve assumed they’ve done traffic studies, but ideally I would like to see more growth centered closer to downtown.”

Since Jarrett has been living in Huntington, she has noticed the traffic problems over the years, but it is not an issue for her. However, she does believe that adding thousands of more homes and having more people on the roads commuting to work and school will make the traffic substantially worse.

Even though traffic is a problem on those streets, they are not at over capacity contrary to what some surrounding residents may think, said Chris Dawson, senior transportation planner at the Alachua County Department of Growth Management.

The Florida Department of Transportation and Alachua County Public Works Department does traffic evaluations of average annual daily trips to see how many trips there are on a given roadway during the year. According to the evaluations, the amount of trips on those streets from 2007 to 2016 have only had a slight increase, he said.

“It’s been relatively flat over 9 years,” Dawson said about traffic evaluations for Northwest 98th Street and Northwest 23rd Avenue. “The roadway is currently operating below its adopted maximum service volume,” he added in an email about Northwest 39th Avenue.

“A lot of time people perceive that there is overcapacity because of their feeling of how traffic there should be. So that can kind of sometimes weigh people’s perceptions of what the roads are doing, but based on the adopted levels of those roadways, neither one of them are operating at a deficiency,” Dawson said.

If traffic does become too unmanageable from the new apartment sites, the department will look at a range of options for managing traffic better.

“Our entire transportation network would look at alternate transportation routes (and) a bit of widening,” Dawson said. “We could look at building another road in the area that’s parallel which might carry some of the traffic, so there’s lots of options to be looking at.”

Summer Jarro is a WUFT news reporter and third-year journalism student at UF who can be contacted at 352-392-6397 or s0945834@ufl.edu.
@summerjarro
Previous Bradford County Residents Near Lake Sampson Suffer Flooding And No Power
Next Sept. 18, 2017: Afternoon News in 90