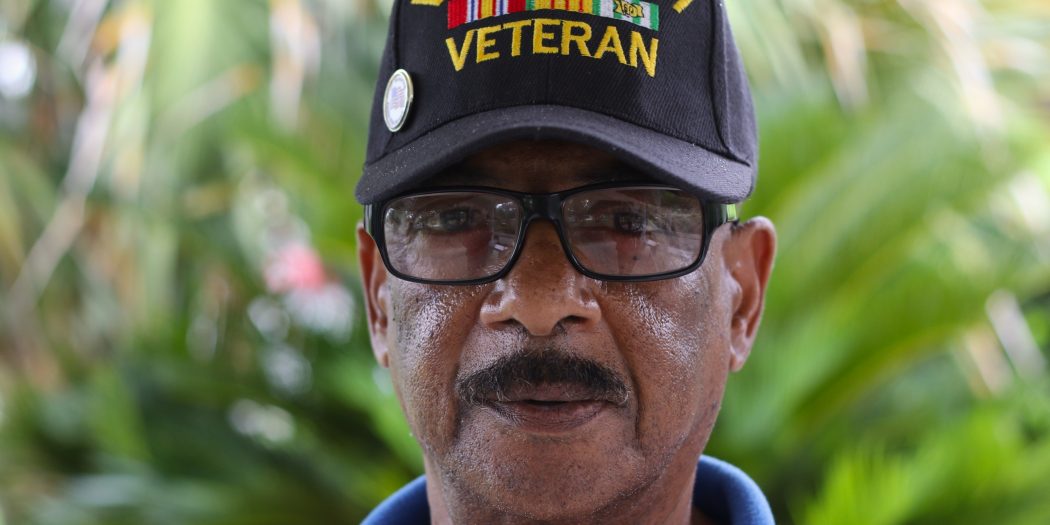 Lewis Alston’s military career was over by age 19. His time as a reconnaissance scout in the U.S. Marine Corps ended after he was wounded, but he faced what turned out to be a 15-year struggle to leave “a dark place — very, very dark.” He’s battled the effects of Agent Orange exposure and only moved to the Ocala area about 18 months ago, learning at about the same time that he was safe from further treatment for liver cancer. Our conversation took place Aug. 16, 2017, in Ocala’s Veterans Park.

My name’s Lewis Alston. I was born in Glassboro, New Jersey, but raised in Lancaster, Pennsylvania. Born May 23, 1951.

Did you enlist or were you drafted?

What years did you serve — outside of Vietnam and in country?

Do you remember when you first heard of a conflict in Vietnam?

Yes, on TV. Constantly. All the time, we’d see it on TV. I hung around with guys a lot older (than me). Each one has their own DNA to each part of Vietnam, but I lived in the black community, so it was a whole different ballgame in the black community. When I left high school — we had a racial riot in Lancaster — my dad owned a business, and I was not allowed to be involved in that (riot). That’s when I told him it was time for me to go into the service. He was for it, but my mama wasn’t because she was a Reformed Mennonite. She wore the clothes and everything. She was against the war and the service. But I said, ‘Mom, it’s time for me to serve my country.’ Because I thought it was the right thing to do.

You mentioned that coming back into the black community was different — in terms of veterans coming back, correct? How so?

It started when we came back, they would tell us to take our uniform off because they have the haters out there. I did, but as a Marine, I still wear a high and tight (haircut), so they already knew who we were. But it was very, very ugly, especially when I got home. The only hero’s welcome was my mom and sisters and brothers, because my dad had died when I was over in Vietnam. They did let me come home for the funeral. I went into Vietnam September 1969. In January, came home for his, but in February I was back in combat again. That was hard for me to do a transaction. They asked me how I was feeling. I said, ‘I don’t know. I can’t feel it.’ It was a little rough.

Where was your boot camp?

Parris Island. I went through infantry training at Camp Lejeune and did my advanced reconnaissance training in Camp Pendleton, California. By then, I was old enough to go to Vietnam, so I went straight to Vietnam.

Where within country were you?

We were based out of Da Nang. Outskirts of Da Nang. It was called Freedom Hill. That’s where our base was. But as a reconnaissance scout, we were dropped in. That’s why my heroes are the pilots and crew chief and door gunners, because they never left us. I don’t care what branch it was. They stayed on the ground until every man was on board. As a reconnaissance scout, it was an eight-man team. We were dropped in to see what type of terrain it was, if there were VC, NVA, if there were hooches, water supply. We’d stay out for eight days, come back, give all our information and that’s when they’d send the grunts in to do the operation.

Our job was not to have contact, but that’s like saying it doesn’t snow in Pennsylvania, so sometimes it got a little rough out there for us.

When you’re out in the bush, they (Vietcong) would smell us right away — just as much as we could smell them.

The roster would come up, and they would let you know what squad was going out. Three days prior to, you stop taking a shower. When you take a shower, there’s deodorant soap. When you’re out in the bush, they (Vietcong) would smell us right away — just as much as we could smell them. They’d smell like burnt wood because they cook outside all the time. The stronger the smell would come, the more you know you’re coming into a basecamp, or something is going on. We’d try to avoid contact, but with eight men… The VC would hit us and run, but if the NVA was on us, we’d have to call reactionary, which meant any branch of the service — we need help. We need to get out of here because, we called it, ‘s— hit the fan.’

Do you recall your first encounter with the enemy?

We were given a grid. It was either in the safety zone or kill zone. The safety zone means they had a proper ID, but a kill zone means there are VC or NVA in there. When we went into a village, they always had a whole lot of rice. We always had an interpreter, and he’d ask the chief or mayor of the village why they had all this rice. He’d say, ‘It’s just for us.’ After you get a little ugly, you find out that when they pointed (gestures out and upward), that’s when it was it. They just opened up on us. It’s real chaos. The main thing is we came together as a unit. We were so close to each other. We used to send tapes home to the family. I let them know, ‘Don’t let my mama know I’m out here in the war. I told them I’m in the rear.’ We looked after each other that way. We looked out for one another. It was unreal. Soon as it hit — boom. Everybody knows what they’re supposed to do. My job was with an M79, and sometimes carried gas to get out of there.

My first encounter, I was scared to death. I remember telling my legs to move, and they didn’t want to move. I told them, ‘You gotta move, man, you gotta move.’ That was the scariest.

Yeah. Then after time, you get callous to it. I had over 20 long-range reconnaissance patrols. But there’s ones not even on the books. I don’t even talk about that. We were just there. If something went wrong, we had to make it right.

Someone shared something with me just recently that I want to share. I couldn’t understand why things was happening like that over there. Someone told me that God gave you a different spirit to be in combat. Once you leave there, that’s taken away. This is the spirit I have now — a much calmer spirit I’m able to understand because I went through a lot of alcohol when I first came home. I couldn’t get it together. I’m one of them that had to go to rehab to get my life in order. It was messed up. I didn’t know I was suffering post-traumatic stress. I felt so bad inside that I wanted to die. But I didn’t want to take my own life. But I would put others in position to take my life. I lived like that until December 22, 1985.

So 15 years after you came back?

Where were you living at that time?

How’d you make your way down here (to Ocala)?

A year ago in February. I have that Agent Orange (exposure). We thought I had cancer in my liver. We came down here. I didn’t tell anybody — my wife, my son or my daughter, my grandchildren. I thought I was out of here. I got on this medication, where I was sick for three months.

You couldn’t tell them what? That you were sick?

Yeah. That I thought I was going to die. I didn’t want to hurt their heart. I kept that to myself until the next test came out, and they said, ‘You’re OK.’ That’s when I told them, but I couldn’t tell them. I didn’t want to do that. June of last year.

Tell me about your wound you suffered that eventually got you back home.

Our team got hit. And I lost my best friend.

What was his name?

I made it home. I got hit with shrap metal in my knee and had a head injury, but I could live with that. But each day doesn’t go by that I don’t think about him. I knew exactly what happened to him. It was right in front of my face. That hurt me more than anything, even than being in combat. To watch your best friend — you’re just talking to him — and that quick, it’s over. I just couldn’t deal with it. We were way up around Chu Lai. We ran up around the DMZ that separated the north and the south. They said we weren’t in Cambodia, so we weren’t there. I’ll leave it like that. But all our work was up north. Up north, it was straight up jungles.

How did you get involved with the Marion County chapter of Vietnam Veterans of America?

It felt like a home. You’re around veterans who care about our community, our history of our veterans. I’ve been here ever since.

Up home in Lancaster, I was on honor guard. I completed about 300 services. That’s part of my life. I always looked out for our veterans up there, our homeless veterans. Drug or alcohol — helped rehabilitate them. Always told them, ‘Look, even though things are bad, as long as you give, it’ll come back.’ That’s what I was doing was giving myself back. I made a promise to God, that if you spare me, I would look out for veterans and their family or anyone in need. That was December 22, 1985. I still do that. My wife and I were blessed with a beautiful home down here. As I’m driving by, I see (Veterans Park). I said, ‘That looks real nice.’ As I’m walking around, taking a look at it, I came in here (to the park office).

It felt like a home. You’re around veterans who care about our community, our history of our veterans. I’ve been here ever since.