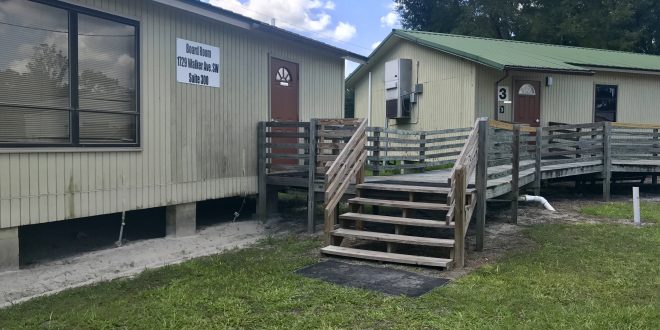 The Suwannee County School District temporarily moved its headquarters to mobile units (pictured) on Walker Avenue Southwest in Live Oak after mold forced employees out of the original building. The district expects to make a decision on its headquarters' future on or before the school board's Sept. 26 meeting. (Julianna Musumeci/WUFT News)

The Suwannee County School District expects to decide on a plan sometime in September on how to moved forward after mold caused it to temporarily relocate its Live Oak headquarters.

Mold was discovered in June under carpet at the headquarters during a building inspection, which also revealed water leakage and moisture. The district then relocated its headquarters to mobile units south of downtown Live Oak.

“We didn’t wait for the insurance company to say it’s safe or not safe,” Superintendent Ted Roush said. “We saw that there was mold there. We saw there was moisture there, and [the district’s director of maintenance] confirmed that.”

The 50-year-old headquarters was originally a warehouse before being converted into office space.

The relocation did not cause any disturbances in workflow as the school year began on Aug. 10 and Mitrefinch attendance solution software was implemented to keep attendance confirmed, Roush said.

“We were not down at all in terms of our service to our students, parents and community,” he said. “Even the phone numbers didn’t change since we moved to different locations.”

Once the insurance company finalizes what caused the building’s mold, it will report to the district on how to resolve the building issues.

The school board is discussing options on how to move forward. One idea is to use the insurance settlement money to fix and move back into the original building, while another is to build a new headquarters in front of Suwannee Elementary School.

A shout of joy echoes through Idylwild Elementary School’s media center every Thursday afternoon, as …