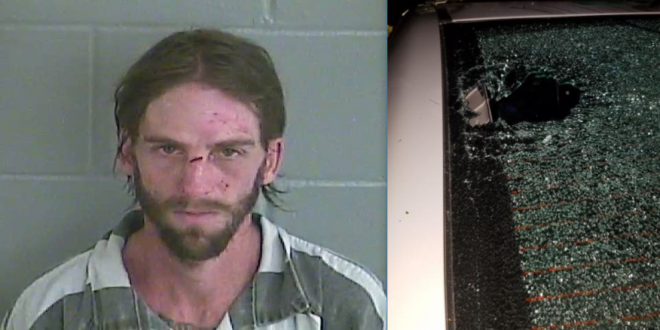 A Bronson man broke a deputy’s hand and smashed the rear window of a patrol car with his head Saturday during an arrest for growing 21 pot plants in his bedroom.

Andrew Phillips, 38, was charged with cultivation of marijuana, possession of marijuana, resisting an officer with violence, battery on a law enforcement officer and criminal mischief, according to a news release from the Levy County Sheriff’s Office.

Phillips asked them for help in finding his backpack and said that once they found it, he would “go to bed,” the release said. He led the deputies into his room, where they found the 21 pot plants.

“The manner which our deputies discovered these marijuana plants growing was very unusual,” sheriff’s office spokesman Lt. Scott Tummond later told WUFT News in a phone interview. “It’s not often that the person cultivating the marijuana will invite the deputies into the room where it’s visible.”

The deputies arrested Phillips and began escorting him out of the house.

But as they did, he said, “I’m not going to jail,” and began to fight them, the release said.

One deputy had his hand broken in the fight and is now in a cast, Tummond said.

Later, while the deputies searched him against a patrol car, Phillips intentionally head-butted the rear window, shattering the glass.

“As the officer was patting him down, he just reared back and head-butted the back windshield of the vehicle and smashed it,” Tummond said.

He also spit blood and saliva at the deputies and responding medical personnel. He was taken to the hospital, and after treatment, he was released to awaiting deputies.

They took Phillips to the Levy County jail, and his bond was set at $112,000. He remained there as of Wednesday afternoon, according to jail records.

Mercedes Leguizamon is a reporter at WUFT News, she can be reached at 786-619-4733 or by email at mercedeslegui@gmail.com and mercelegui@ufl.edu
@@mercelegui_UF
Previous Against Michigan, Gators’ Physicality Could Be Big Factor
Next Suwannee Schools Still Examining Solutions After Mold Found