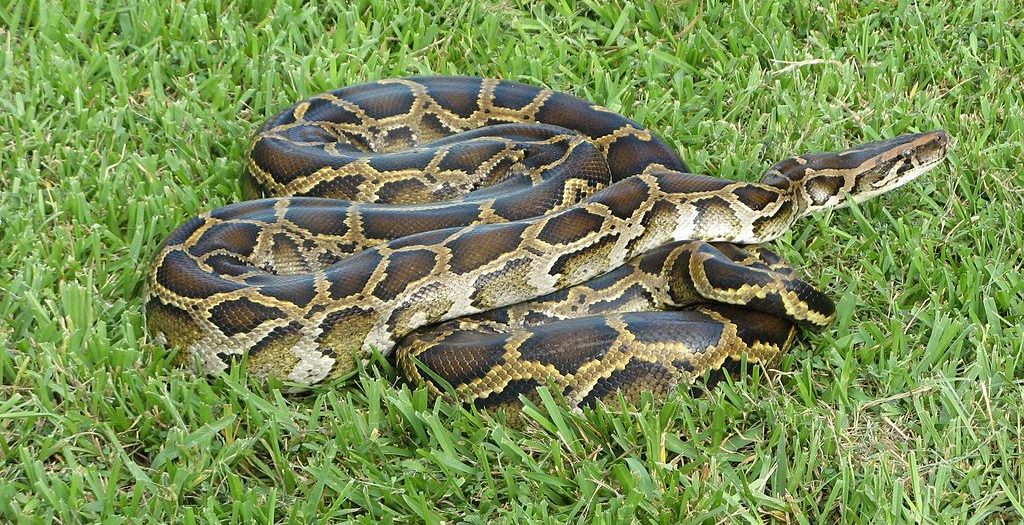 The South Florida Water Management Department (SFWMD) chose 25 hunters out of 1000 applicants from across the country to hunt Burmese pythons in the Florida everglades. The SFWMD spokesperson Randy Smith said the program chose experienced people that were familiar with the everglades, showed passion for the environment and had a clear understanding of severe issues with the exotic snakes.

The hunters are paid $8.10 per hour. In addition, they are presented $50 for pythons that are 4 feet and $25 for each extra foot. For every nest eliminated with eggs they’ll receive $100. Smith said coming across a nest is one of the hardest things and none of the hunters came across any this season.

The largest python captured to date with the program was over 16 feet, with the largest caught in Florida being over 18 feet in length.

24-year-old Kyle Penniston has caught 15 snakes with the Python Elimination Program this year, including one of the largest, measuring 15 feet.  Penniston is the third most successful hunter of the program. He has grown up in the everglades catching snakes and since the age of 15 has been working with wild animals.

Penniston and the other hunters are given access to SFWDM’s 200,000 acres of land to hunt these snakes. These are restricted areas the general public does not have access to.

“Between me and the other hunters we have taken out 149 snakes. Now it doesn’t seem like a large amount but between all the eggs that have been pulled out of the females and counted there has been 1600 eggs,” said Penniston. “So that’s 1600 pythons that are not going to hatch in the next year and won’t be able to reproduce in the next year.”

During hurricane Andrew in 1992 a Burmese Python breeding facility was destroyed in Homestead, FL and thousands of pythons were released. Penniston said when pythons are captured their DNA can still be traced back to snakes that came from this facility. The everglades is the ideal habitat for these snakes, he added.

“We’re trying to have as large of an impact as we can with taking these pythons out. Now it’s never in my opinion going to end. There’s so much everglades out here and it’s so hard to search every square foot of the everglades,” said Penniston. “But what we can do is we can control the population to where we can try to help pour native animals.”

“The University of Florida has done some studies that show 99% of the fur bearing animals that used to live in the everglades are gone. You never see rabbit, fox or fur bearing animals anymore and it’s likely that they’re probably hunting on the young deer,” said Smith.

Birds native to the everglades are now beginning to be impacted by the exotic snake too.

The SFWMD will attend the governing board meeting June 8 and request to expand the season, that started on March 25 and ends June 1. SFWMD will also attempt to increase the number of hunters and the geographic area where they can capture the snakes.

“The program has been very successful,” said Smith.

“It’s not their fault they ended up in the everglades. They’re just trying to survive,” said Penniston.

Andrea is a reporter for WUFT who can be reached by calling 352-392-6397 or emailing news@wuft.org.
Previous Mebane Middle School In Alachua Evacuated After Bomb Threat
Next As Next Hurricane Season Begins, A St. Augustine Community Is Still Rebuilding