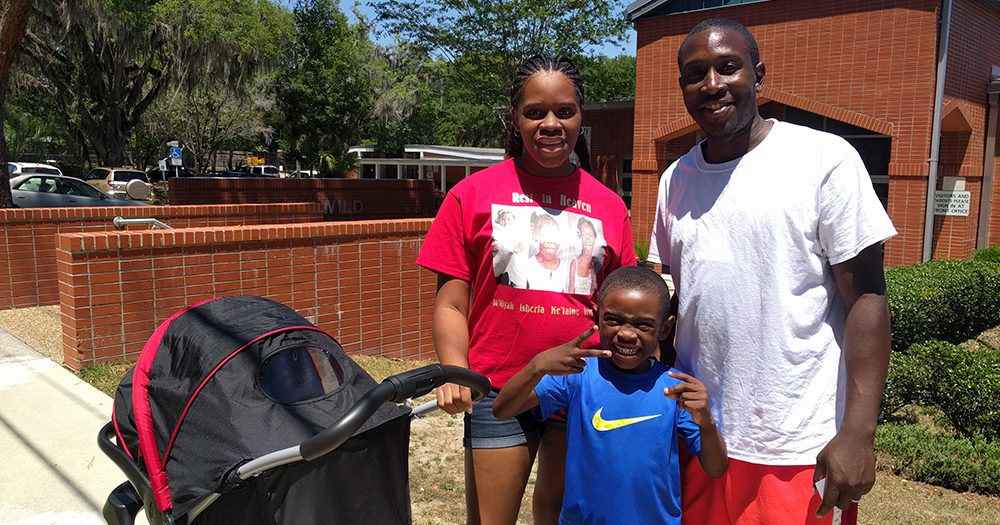 This story is a part of Untold Florida, a WUFT News series built from your questions. An audience member asked us “Why do Florida school districts still collect Social Security Numbers of students who are enrolling? Where are they stored? Who has access?”

Chad Kleinatland was at C.W. Norton Elementary in north Gainesville on a May afternoon with his son, Michael.

It’s the time of year Alachua County schools call Kindergarten Round-Up. Michael is going to Kindergarten at Norton in the fall.

Is his father planning to provide the number to his child’s school district, as it asks of every new student?

Florida’s public schools need an easy way to track those students from enrollment through graduation. Why not use the number that millions of American citizens receive shortly after birth?

The Social Security Administration’s answer: “Through misuse of SSNs, employees, faculty, and staff of educational institutions are subject to the danger of identity theft and its repercussions. Access to an individual’s SSN can enable a thief to obtain information that can result in significant financial difficulties for the victim. While this can be disruptive for students and staff it can also lead to civil liability for an educational institution and its individual employees if someone is harmed by information that has been made available to others.”

In short, it suggests states figure out their own way to track students. At least one of Florida’s 67 school district superintendents agrees.

“I don’t know why we would have to have it,” Union County’s Carlton Faulk said. “Why would you (as a school district) need it, really?”

Ontario Smith Sr. also signed up his son, Ontario Jr., during Alachua County’s Kindergarten Round-Up this month. He didn’t give a second thought to the idea of providing Idylwild Elementary with his son’s Social Security Number.

“Whatever they need for us to make sure… he can have a good school year,” he said. “Whatever we gotta do — I trust them.”

Still, the Social Security Administration’s Office of Inspector General was concerned enough about the practice nationally to issue an audit report in 2010. That review found “widespread” usage of Social Security Numbers as student identifiers.

“While some State laws may require that K-12 schools collect SSNs in some instances, we believe some do so as a matter of convenience — because SSNs are unique identifiers and most students have an SSN,” auditor Patrick P. O’Carroll, Jr. wrote.

“However, we do not believe administrative convenience should ever be more important than safeguarding children’s personal information.”

The audit also found Florida in 2010 to be one of only seven states nationwide that require school districts to request Social Security Numbers from students. That law is still on the books, though it also says students aren’t required to provide it in order to enroll or graduate.

The Department of Education did not respond to a list of questions, such as why Florida is among the minority in collecting Social Security Numbers and whether the state gives instructions to districts about which employees should have access to that information.

‘We live in a different time’

When state Sen. Dennis Baxley (R-Ocala) was in college in the early 1970s, the school identified him by his Social Security Number, to the extent that it appeared on each of his school exams.

“Who knows where those numbers are today?” he said. Baxley first wants to see an analysis of “the fallout and damage from the use of these numbers, then adopt the policy — probably eliminating the use of Social Security Numbers as an identifier.”

He said he would consider filing such legislation for the 2018 session because “we live in a different time.”

Such an analysis would likely mention these cases: a former Broward County band director who federal officials said in 2015 used former students’ personal information to commit fraud, two North Miami men the FBI found in 2015 with student information printouts, and hackers going after the Manatee County School District in February.

The Miami Herald wrote in a story about a separate 2015 fraud bust, “Florida, Georgia and the District of Columbia have emerged as national hot spots for ID theft-related crimes, especially tax-refund fraud.”

Variance in each district

All school districts ask for Social Security Numbers from new students, though the wording on each district’s enrollment form is different.

State law does not require that students and parents be notified that they can withhold their Social Security Number, and so some districts’ forms do not include that information.

Similarly, the law does not require schools to say why they request it. The list of reasons goes beyond its usage as a student identifier. These were Alachua County’s most recent:

When Chad Kleinatland read that list in Michael’s enrollment packet, he said, “I don’t really think they need it.”

Levy County no longer uses Social Security Numbers to track students and parents for free or reduced price lunch, according to Kalee Wade, the district’s coordinator of benefits and risk management, because the entire county is enrolled in a free lunch program.

Regardless of how a student’s number is used in the district, Wade said, “We respect their privacy and would obviously never want anything to happen to a student’s important information.”

There are alternatives, including the Florida Education Identifier, which the state created during the past decade. Districts must now use that 10-digit number to report data to the state Department of Education.

Those who don’t provide it

The Florida Education Identifier is also sometimes used to identify students who choose to withhold their number from a school district.

How many students and parents don’t give districts their number? Totals vary, and the higher totals of opt-outs don’t always correlate with those districts that tell students that providing their number is optional.

*Bradford, Dixie, Gilchrist, Hernando, and Lafayette counties did not provide data when requested.

Once a parent submits a child’s Social Security Number to a district, it’s stored in two ways.

First, a paper copy goes into a student’s cumulative folder. In Suwannee County those are “eventually shredded,” according to the district. Alachua, Marion, and Union counties archive them after a student’s graduation. Union County, for example, has paper files going back to 1922.

More importantly, though, is their electronic storage in the cloud. Alachua, Columbia, Levy, Marion, and Suwannee counties keep records in encrypted databases.

Ethan is a journalist at WUFT News. He's a Pennsylvania native who found a home reporting Florida's stories. Reach him by emailing emagoc@wuft.org or calling 352-294-1525.
Previous Universities Get Money For Faculty, Grad Programs
Next The Point Podcast: Going Inside Gainesville’s First Medical Marijuana Dispensary