Skepticism of the Seasonal Forecasts

Another hurricane season is almost here. It comes every year. So too the projections. The hype. But also the sobering thought that this might be the year our homes, businesses, or entire community are changed forever.

Curiosity about how bad the year could be naturally generates interest. It’s one of the reasons the late Dr. William Gray began issuing seasonal forecasts 35 years ago. His team at Colorado State claims an overall success rate of 69%, but that could be misleading if the cyclone’s lifetime or strength is not considered.

Most published forecasts emphasize a projected number of storms compared to the 30-year average. By this measuring stick alone, the three most popular ones (Colorado State, The Weather Channel, and NOAA) have only successfully predicted whether the season would be active or inactive 51% of the time.

The 30-year mean by which “normal” is defined includes 12 named storms and six hurricanes, with two becoming major. The last season that was forecast to be active, or above normal, was 2013, which Phil admitted was his largest forecast error to date. Only two hurricanes formed that year, far below his forecast of nine.

Other agencies have since followed in Dr. Gray’s footsteps, and today there are dozens of pre-season forecasts available. In the past ten years, however, there has been no significant increase in the accuracy of such efforts. 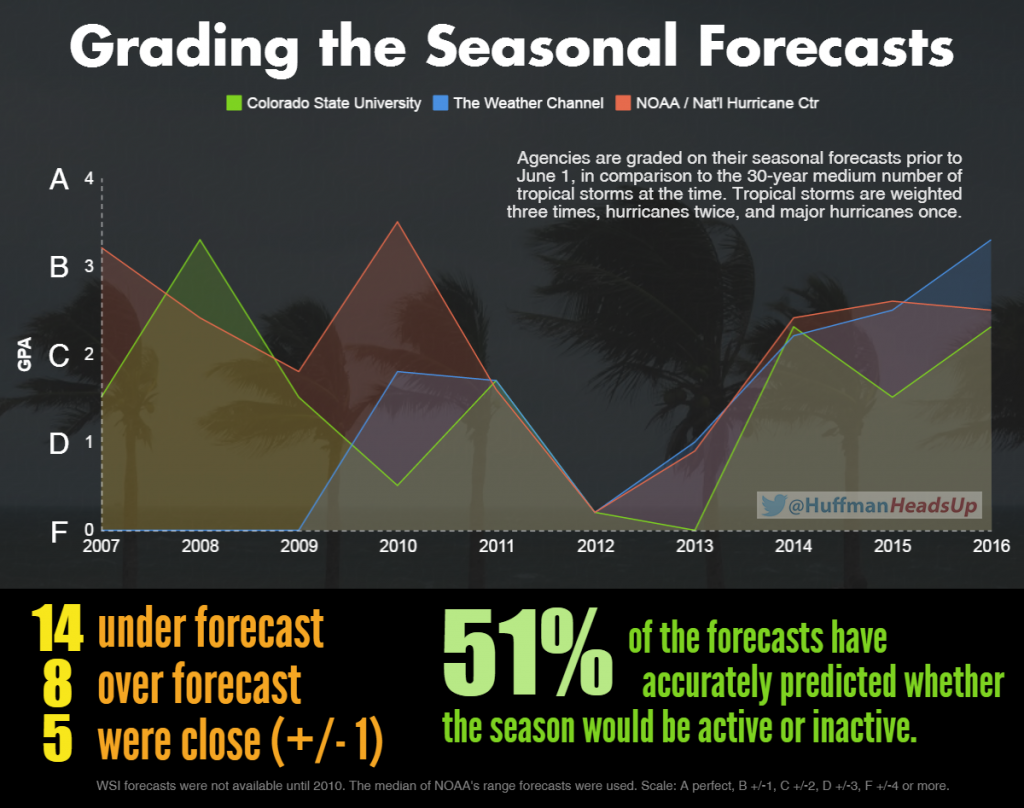 Not only is the accuracy of the seasonal forecast in question, its efficacy is subject to debate. Shortly after Colorado State’s forecast was posted on Twitter, former FEMA Administrator Craig Fugate chimed in.

And what will you do differently based on this forecast? Me – I get ready for Hurricane Season every year, no matter the seasonal forecast https://t.co/kv2ohHnK0h

This echoes his sentiment expressed at last year’s Governor’s Hurricane Conference in Orlando. A room filled with hundreds of emergency managers went silent after he asked, “Are you going to do anything different this year, if it’s above average, average, or below average?”

Fugate said all residents in Florida are at risk of a hurricane, even those who live the furthest inland. The 2016 season served as a reminder of how vulnerable the peninsula is, and Craig believes the response was just “mediocre”.

“I think too many people have forgotten the lessons that they were waiting for the next forecast to say ‘maybe I don’t need to go’. The problem was Matthew was a big enough storm that just a slight deviation inland would have meant a lot more impacts.”

“In my conversations with people at outreach events, I don’t hear them talking much about pre-season forecasts, so I’m not sure these forecasts play a major role in determining preparedness behavior.”

May Mayfield, whose steady voice as director of the National Hurricane Center through the hyperactive 2004 and 2005 seasons won him an Emmy, appreciates the science that goes into a long range forecast.

“I’m all for the research to improve seasonal forecasts, but it’s just not all about the numbers.”

Cooler-than-normal sea surface temperatures, higher air pressure and the salinity of the water are all contributing factors to Klotzbach’s numbers this year. He also uses analogs, years with similar meteorological conditions at this time of year, to formulate his forecast.

The strongest signal for Atlantic Basin tropical cyclone activity comes from the other side of our continent. When waters in the Eastern Pacific are unusually warm, a phenomenon meteorologists refer to as an El Nino, it correlates to fewer hurricanes in the Atlantic. The opposite phase, La Nina, is a cool period in the Pacific that has a notable, albeit weaker connection to the Atlantic’s busier years.

This year, however, Phil said he’s “not sure” about this sign. A weak La Nina developed last fall, but has since waned. A rare sudden flip to an El Nino may occur this fall, but “uncertainty is high”, he said, on whether it will be strong enough to play a significant role.

Regardless of a season’s forecast, Phil wanted everyone to remember, “There’s really no way to predict where the storms are going to go months in advance. Once you’re a few days out, you can know with some certainly where they’re going to go.”

The Atlantic Hurricane Season runs from June 1 to November 30.

Jeff is WUFT's chief meteorologist. Reach him by emailing jhuffman@wruf.com or calling 352-294-1506.
Previous Afternoon News In 90
Next Newberry To Get New Mayor, Commissioners In City Election