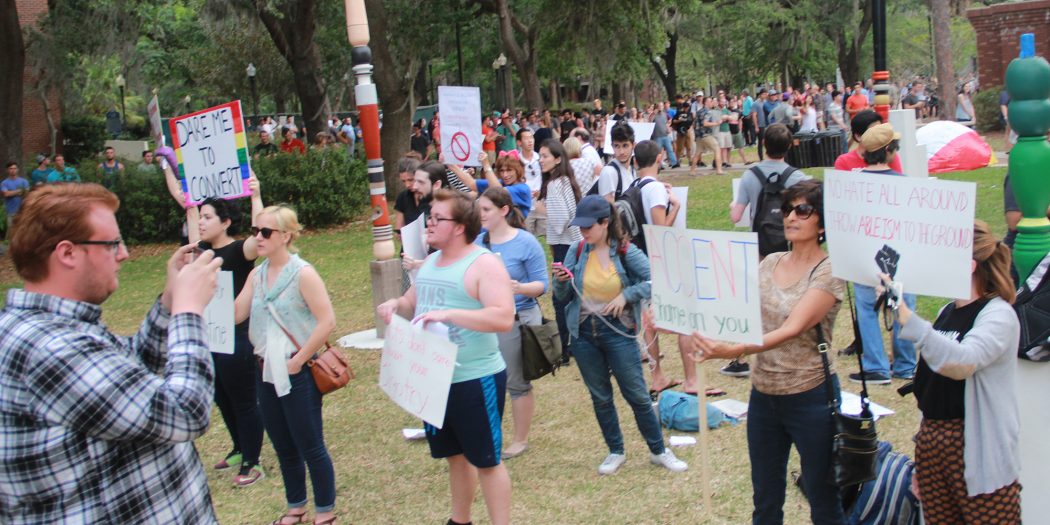 Protesters and counter-protesters alike gathered for Ben Shapiro's talk on campus Monday night. Some of the protesters accused Shapiro of being a bigot and slammed ACCENT for allowing him to speak. (David Street/WUFT News).

Protesters made a stand at the University of Florida-sponsored talk by Ben Shapiro, a conservative political commentator and editor-in-chief of The Daily Wire, a conservative news website Monday night.

The University of Florida Young Americans for Freedom, a student-led conservative organization, and UF’s ACCENT Speaker’s Bureau co-hosted an event inviting Shapiro to speak on campus at the University Auditorium at 7 p.m. Tickets for the event ran out within 45 minutes of being released.

Attendees and protesters crowded outside of the University Auditorium more than an hour before the doors were scheduled to open for the event with signs held by protesters of Shapiro and counter-protesters alike, with messages ranging from “Stop Rape Culture” to “Snowflakes Melt in the Swamp.”

Some opposed what they call Shapiro’s extreme views on political and social issues and even more protesters were against ACCENT’s use of student fees to cover $15,000 of Shapiro’s $20,000 speaking fee.

Timothy Tia, one of the protesters at the event, felt as though UF could make far more of an impact on students with the money used to bring Shapiro to UF. Additionally, Tia said he protested Shapiro’s appearance to show support for underrepresented communities on campus.

“First of all, we’re troubled that they’re spending tuition dollars on this,” Tia said. “More importantly, I think we want to show trans students, Palestinian students, Muslim students that there are people out there supporting them and that not everyone at UF is behind the type of ideology that Ben Shapiro represents.”

While several students opposed Shapiro, others including students from the Young American’s for Freedom organization, supported his message and the decision to have him speak on campus.

Taylor Roth, a public relations and political science major at UF, said she was excited to hear Shapiro speak because of his views on the constitution, the Bill of Rights and holding authority accountable.

“I came out because I support free speech, and I would like to hear more conservative viewpoints on campus,” she said. “ I also like Ben Shapiro, and I like what he has to say, and I like to hear diversity of opinion.”

While Roth supported Shapiro’s message, her major focus was on the exercising of free speech.

“We support freedom of speech and we support basically classical liberal ideas that the country was founded from that our founding fathers believed in and other ideals that make America the greatest country on earth,” Roth said.“I feel like we’re at a point in this country where we need to settle down a little bit, listen to other viewpoints and not immediately judge people or label them on both ends of the isle.”

“With a packed venue that seats 840 and several hundred more waiting outside eager to get in, conservatism is in demand at UF. People want to hear something different. A true conservative speaker hasn’t spoken in years at UF,” he said.

Tia also recognized the importance of free speech issue but said he saw Shapiro’s appearance as an acceptance of hate speech.

“I think most of us agree that he has a right to speak at the university, it’s just, one, that we need to confront hateful speech when it exists, and two, it’s just a bad use of our tuition dollars,” Tia said.

Cassandra Rosevelt is a reporter for WuftNews and can be reached at 856-25-7056 or caseyerin1994@ufl.edu.
@@CassandraErin94
Previous Gainesville Considers Adding Bike Lanes, I-75 Express Lanes
Next April 4, 2017: Morning News In 90