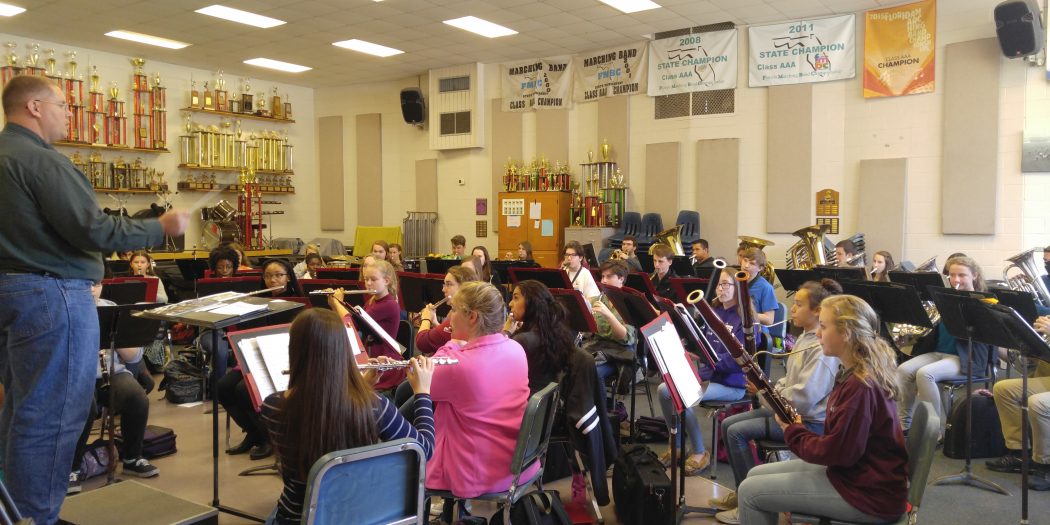 Bill Pirzer, Director of Bands at Gainesville High School directors his students as they practice and prepare for the parade at the National Cherry Blossom Festival in Washington D.C. on April 8. (Brittney Smith/WUFT News)

One local high school is preparing to make school history.

The Gainesville High School band has been nominated to march in the parade at the National Cherry Blossom Festival in Washington D.C., one of only eight to ten other schools in the country to receive the nomination.

The National Cherry Blossom Festival is one of the capital’s largest spectator events, according to Events D.C. The festival celebrates spring, the gift of the cherry blossom trees, and the friendship between the people of Japan and the United States. The festival typically lasts about one month with daily events incorporating arts, culture, community spirit, and perhaps the biggest event, the parade.

Bill Pirzer, Director of Bands at GHS, said the process to be chosen took about a year and a half and was not easy. “We had to send in audition materials, videos from us performing at the University of Florida homecoming parade, we had to send videos of our half time show and our state championships, letters of recommendation, so it’s been a long process.”

Although it took a lot to get there, Pirzer said attending this festival is a huge deal for their school. “It was extraordinarily exciting, this is the first opportunity that I’ve had as a teacher, and I’ve been teaching for fifteen years, to be able to take my students and to give them these types of opportunities.”

Pirzer isn’t the only one who’s thrilled about heading to Washington; his students are just as enthusiastic to be a part of this experience.

“I am really, really excited for this,” said senior flute player Kimberly Sanchez. “Honestly, I feel honored that our band got invited to go to D.C. for this parade. It’s a really big event and I’m really happy to be there.”

Senior trombone player and drum major Tyler Williams said it’s hard to contain the excitement about something so big.

“It’s a once in a lifetime opportunity, we were actually one of eight high schools bands selected from all across the country, so that’s really exciting to know we’re capable of doing that,” Williams said. “It’s awesome.”

While the students’ are excited, Pirzer and the students still hope to raise enough money on their own to completely fund their trip. The band has created seven GoFundMe pages, one for each individual section of the band. Their hope is to raise $15,000 to pay for buses, hotel fare and other activities while in Washington.

Williams said they’ve turned their fund raising into a competition to get the band motivated.

“Whichever section wins gets a pizza party, and when we’re on the trip they get first in line at everything, everything from going into the White House to going to the bathroom,” Williams said.

Pirzer and the band will leave Gainesville on April 5 and head to D.C. for four days.

The parade begins at 10 a.m. on April 8 and is projected to attract about 1.5 million people.

Brittney is a reporter for WUFT News and can be contacted by calling 352-392-6397 or emailing news@wuft.org.
Previous Open Forum Held For Opinions On Future Of Northwest Urban Core
Next Female World War II Veterans Reflect On Service