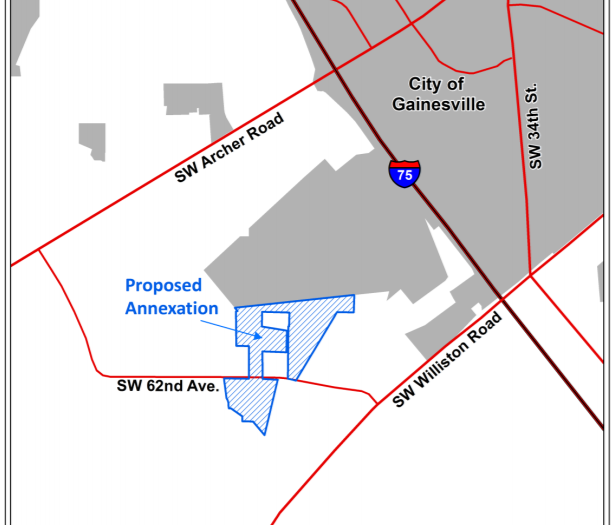 A map of the City of Gainesville's proposed annexation. County commissioners said the two enclaves in the annexation violate Florida statute, prompting them to unanimously vote to appeal the city's ordinance. (Graph courtesy of the Alachua County Growth Management Department)

After lengthy debate, the Alachua County Board of Commissioners unanimously voted to appeal the City of Gainesville’s annexation of 100 acres within the Finley Woods development area in a public meeting Tuesday.

The city’s initial ordinance to voluntarily annex the development area between Southwest Archer Road and Southwest Williston Road was received by the county on Aug. 18, 2016. The county, which saw the seizure of land as a violation of Florida Statute 171.044, asked for revisions to the ordinance on Sept. 7.

Yet on Feb. 2, the city passed the initial order despite the county’s request, frustrating members of the board of county commissioners.

Now, with 20 days left to respond before the annexation is authorized, the county board voted to appeal the city’s ordinance. This will activate the “Florida Governmental Conflict Resolution Act,” requiring discussion between city and county commissions in a public meeting to resolve the issue.

“From what I’ve heard from our people, we brought it forward, and there was no willingness on the part of the city to address the issue,” County Commissioner Vice Chair Lee Pinkoson said in the meeting.

The annexation, according to the county, leaves two pockets of land and Southwest 43rd Terrace under the county’s jurisdiction. Pinkoson said this will unfairly cost county taxpayers, who will have to pay for the maintenance fees of a road surrounded by city territory.

“This proposed annexation is an excellent example of why this law was created in the first place,” County Commissioner Mike Byerly said. “It’s like a poster child for the statute.”

Gerry Dedenbach, the vice president of civil engineering consultancy firm CHW, said he believes the appeal is a waste of taxpayer money and could disrupt the area’s development.

He said his agency, which is helping to develop the Finley Woods area, would coordinate meetings between the county and city as an informal alternative to the appeal — saving litigation costs and allowing the two government entities to maintain a healthy, beneficial relationship.

“I would give you my word, as a professional planner, that within the next two weeks I would force those meetings to happen,” Dedenbach said to the county commissioners. “So that you don’t have to take an adversarial position on this and challenge what the city has done, but work collectively to come to a solution that will provide the means we all seek to have.”

County commissioners, however, said the city’s lack of coordination and compromise has created a situation where they have no choice but to appeal the ordinance.

“We’ve had multiple opportunities and a lengthy process for staff to coordinate. We’ve had every opportunity to talk together, yet here we are,” Byerly said.

Jancie Vinson, a Finley Woods community member, said she attended the public meeting to ensure the county commissioners upheld the wishes of their constituents.

“Certain things you can’t do for convenience or money,” Vinson said. “You have to follow the law.”
Vinson said the county and city’s inability to coordinate and resolve the issue of the annexation costs taxpayers and threatens the rights the Florida Constitution grants them.

“We believe in growth, but how it is done matters,” she said. “No one should be able to override Florida statute — that is wrong.”