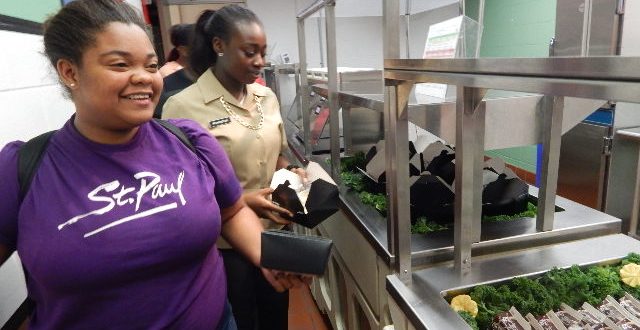 “I don’t even care if they have crust or if they’re handmade,” the 16-year old said. “I just want a peanut-butter-and-jelly sandwich. … I love them.”

In January, Eastside implemented a free after-school meals program for students who take part in extracurricular activities, including sports, tutoring or band. The U.S. Department of Agriculture funds the program, and the Florida Department of Health administers it.

For Eastside students like Gray, who plays volleyball and manages the basketball team, it means accessible and nutritious foods at no extra charge, which helps on long days after the final bell rings at 2:40 p.m.

“Sometimes, we’re here” until 6 p.m., she said. “Sometimes, we just come to school to chill out, but like if we’re coming here, it’s because we’re doing a sport.”

The school applied for the program when faculty and parents noticed students purchasing food from vending machines to gain energy or went off campus, usually walking about half a mile to the Kangaroo Express gas station, said Caron Rowe, Alachua County’s food and nutrition specialist.

“This has been able to [help us make] sure they’re not doing that,” she said. “And they’re getting a fruit and a full milk — all the components to make a nutritional meal.”

The items on the after-school menu are largely preset, but students can participate in taste-testing and then voting on the foods, with the top choices added to the menu, Rowe said.

“Anything we bring into the school, we want to make sure the students like,” Rowe said.

Eastside student Michael Goad, a member of the baseball team, said he’s seen an improvement in himself and his teammates since the meal program was implemented.

“When we’re running the laps, I found that I can do the laps easier and quicker,” he said.

“You don’t hear them complaining when we have the snacks,” he said. “So that’s good, and they can focus on their job, which is playing better baseball.”

Eastside’s implementation makes it one of 28 Alachua County schools that now participate in the after-school meals program. Since it started, the high school has increased hours for its cafeteria staff and hired one person.

Amy Keller, the school’s kitchen manager, said the program’s first day had 29 students. Now, it reaches into the 90s.

“The more students coming in, we need more staff to serve them,” she said. “It’s a win-win.”

Because students are starting to try the free food after school more and then like it, they’re also now paying for lunch more often, too, Rowe said.

“It’s just a great way to reach students and bring them back into the cafeteria and trying the things we offer.”

Chase is a reporter for WUFT who can be reached by calling 352-392-6397 or emailing news@wuft.org.
Previous 3 Grants Bring Low-Income Clinic Closer To $500K Goal
Next Higher-Ed Package Headed to Senate Floor

Arguments about reopening schools were colored by politics in a fierce election year in Florida, a battleground state that may determine the next U.S. president.