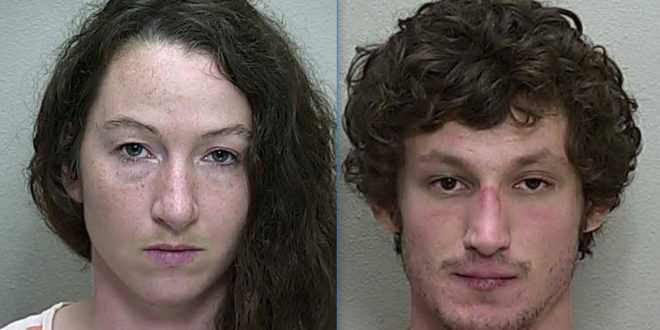 Karrie Kay Ford, 29, and Nicholas Segal-Wright, 25, face charges after police say they lodged themselves in the Sabal Trail Pipeline in Marion County on Wednesday. (Photos from Marion County Sheriff's Office)

Police have identified the two protestors who wedged themselves in the Sabal Trail Pipeline Wednesday.

Karrie Kay Ford, 29, and Nicholas Segal-Wright, 25, were being held in Marion County Jail as of Thursday morning, said Lauren Lettelier, a spokeswoman for the Marion County Sheriff’s Office.

After both were removed from the pipeline, they were assessed by paramedics and brought to the Marion County Jail.

Both were charged with three felonies: grand theft between $20,000 and $100,000, trespassing on a posted construction site and criminal mischief.

Ford was also charged with resisting arrest without violence, Lettelier said, because she refused to remove a device on her arm that prohibited deputies from taking her into custody.

This device, commonly used by protestors, was made of cement and locked Segal-Wright and Ford’s hands together, she said.

Ford was being held on a $10,000 bond and Segal-Wright on a $9,000 one. Both remained in the Marion County Jail as of Thursday morning.

Authorities have removed both protesters who crawled deep inside the Sabal Trail Pipeline earlier today in Marion County.

The first was removed shortly after 1 p.m., and the second about an hour later, said Lauren Lettelier, a spokeswoman for the Marion County Sheriff’s Office.

Both are being uncooperative in providing their identities, Lettelier said.

She expects them to receive charges but didn’t know what the exact charges will be.

Two Sabal Trail Pipeline protesters lodged themselves deep inside the pipeline in Marion County earlier today, and authorities have removed one of them.

As of roughly 2 p.m. today, the other still remained inside the pipe’s section near the 12500 block of Southwest Highway 200, said Lauren Lettelier, a spokeswoman for the Marion County Sheriff’s Office.

Marion County Fire Rescue personnel went inside the pipeline and extracted the one protester, and they were still working on getting the other one out this afternoon. Lettelier said she’s not able to yet release the identity of the person extracted and doesn’t know the name of the other.

The protester who was extracted was taken into custody and was being evaluated by paramedics, Lettelier said, adding that charges are expected for both.

Amy Nelson is a reporter for WUFT News. She can be reached at news@wuft.org or 352-392-6397.
@@AmyNelsonUF
Previous ‘We Want A Different America’: Trump’s Travel Ban Prompts UF Town Hall
Next Pianist Stephen Beus On Magnum Opus In The WUFT Classic Studio