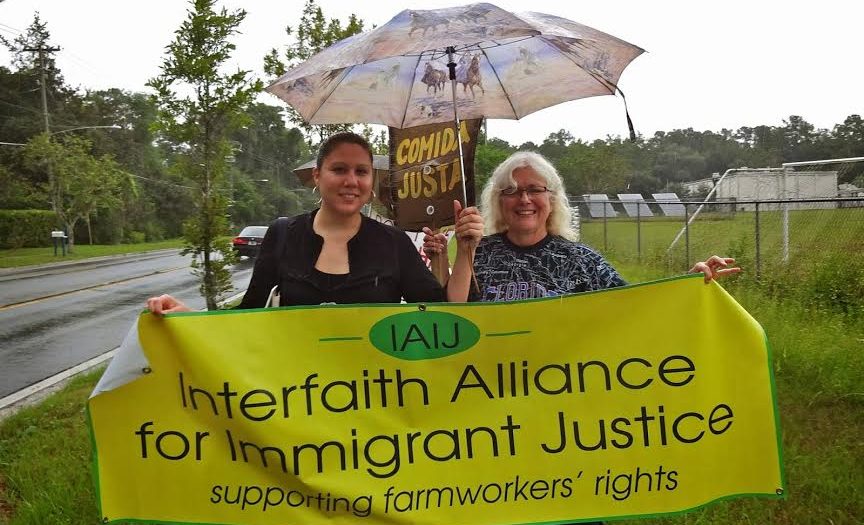 Interfaith Alliance for Immigrant Justice group has expanded to serve all immigrant issues since its founding in 2010 (Photo courtesy of IAIJ).

Rumors of Immigration and Customs Enforcement raids in the Gainesville area have the immigrant population nervous.

“The majority of the families we serve are frightened with all that they are hearing, some true and some not true,” Natalie Norris, Migrant Education Program Coordinator said in an email.

ICE conducted 240,225 removals in 2016, according to their statistics. With the current political climate and rumors, the immigrant community is preparing for the worst, according to Norris.

“One of the concerns is that if the undocumented parents with U.S.-born children are a part of a raid they would be returned to their home country without their children,” she wrote. “With guidance from an immigration lawyer, we have assistance that we call the family contingency plan where the families can designate where they would like their children placed in the event they are taken in.”

These nerves stem from local warnings of ICE pick ups at The Standard and a local SKANSKA construction site.

Construction work is a leading occupation for Hispanics in the United States, according to the Center for Construction Research and Training.  Such rumors kept construction workers from attending work Monday afternoon.

Easterwood has worked in construction for 42 years and has seen similar situations on multiple occasions.

Building Shands’ new neuroscience heart hospital, Easterwood said that all workers are hired under SKANSKA protocol, which verifies that each worker is legal.

In 2010, nearly 1.4 million of Hispanic workers were not U.S. citizens and 50 percent of them resided in the South. Easterwood said that any non-legal worker would still have had to pass the many protocols.

Construction site worker Damian Hall said though that in his seven years of experience he’s never seen such an absence.

“They explained to us why there was a lot of people absent,” the 24-year-old site worker said. “Now that you mention it, I feel like there were no painters or dry-wallers on the first floor.”

Though word of ICE raids seemed to have been distributed throughout Gainesville, such community detentions are rare, according to Syracuse University’s TRAC’s Immigration Project.

The Interfaith Alliance for Immigrant Justice met Monday night at 6 p.m. to see how to support Gainesville’s immigrant population.

The rumors energized a lot of people and drew a lot of concern.

“Everyone wants to do something but we don’t know what that something should be,” he said.

MacMaster said that the rumors may not be true. “I don’t know, this didn’t happen just because someone said it didn’t.” He believes the community can be proactive.

To ease nerves, the IAIJ is figuring out the role of the faith community and working on distributing brochures and cards that outline basic human rights for individuals facing potential deportation.

“Not everyone has democratic rights but everyone has human rights,” MacMaster said. Part of the IAIJ’s plan is to distribute such cards in the locations where these rumored ICE pick ups have happened.

There are also numerous petitions going around for different levels of protection, now with a bigger emphasis. One of the petitions gaining major support and traction is the push for the University of Florida to become a sanctuary campus.

Above all, MacMaster has said that there is support. “A lot of goodwill,” he said.

The Interfaith Alliance for Immigrant Justice meets every second Monday of the month, but they will also be meeting on Saturday at 10 a.m. at the Mennonite meeting house, located at 1236 NW 18th Ave., in hopes to create concrete plans to support those threatened by ICE raids.

Gabriella is a reporter at WUFT news and can be reached at 21gabnun@gmail.com or 305-299-1075.
Previous Umoja Orchestra & Morningbell to Reunite at The Wooly
Next Gainesville Swears In New Postmaster