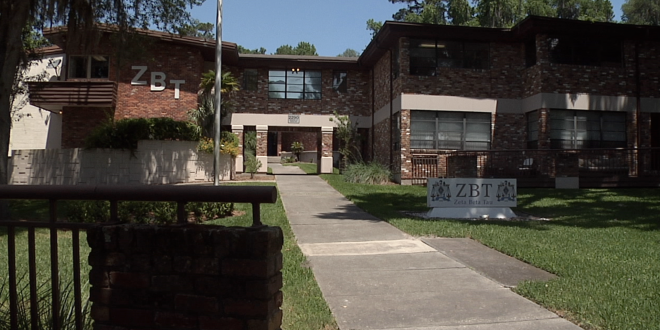 The on-campus house in which members of the University of Florida fraternity Zeta Beta Tau once lived. The chapter has been reinstated following a 2015 incident in which members were accused of acting inappropriately toward a group of veterans in Panama City Beach. (File/WUFT News)

A University of Florida fraternity has been reinstated following what the organization’s national chapter called “inappropriate behavior” at a Panama City Beach resort in April 2015.

Zeta Beta Tau is now recruiting on campus for the first time since the university and the fraternity’s national chapter made the decision to close the chapter that same month.

The only thing publically verified was a fraternity member popping open a champagne bottle on a hotel balcony and spilling some on a veteran’s wife during the Warrior Beach Retreat, an event for wounded veterans.

Initial reports accused fraternity members of also spitting on veterans at the resort and urinating on American flags — actions that were never confirmed by investigators.

In recruiting at UF, the fraternity is accepting only new members because none of the previous ones were allowed to continue, UF spokeswoman Janine Sikes said.

“The bottom line is, they acknowledged quite a few things,” Sikes said in an interview Wednesday. “Some of the allegations against them were found not to be true, but certainly there were quite a few things that were.”

The conditions for the fraternity’s return, including community service and educational programs about veterans affairs, have been met, Sikes said.

The new chapter, she said, will not be on probation but does not have a house (the chapter had been on UF’s Greek Row, but members moved out after the 2015 incident).

“ZBT is a very large fraternity nationally,” Sikes said. “It’s really good to have a robust fraternity like them on campus.”

Warrior Beach Retreat founder Linda Cope said she is impressed with how UF has handled the situation and is glad to see the fraternity back.

“We all make mistakes in life,” she said. “I pray these young men and women learned from this, and they’ll be better Americans because of what happened.”

Several fraternity members contacted by phone and at a recruitment table on campus Wednesday declined comment.

But the president of the national office, Norman M. Waas, said in an email the fraternity is “thrilled to be returning to the home of the Gator Nation” and looks forward to creating a chapter “of which we can all be proud.”

Eric Heubusch is a reporter at WUFT News in Gainesville, Florida. He is a senior at the University of Florida majoring in journalism.
@ericheubusch
Previous Voter Fraud A Local Issue, Not A Federal One, Expert Says
Next Under Bill, Bright Futures Would Again Offer Full Tuition Coverage