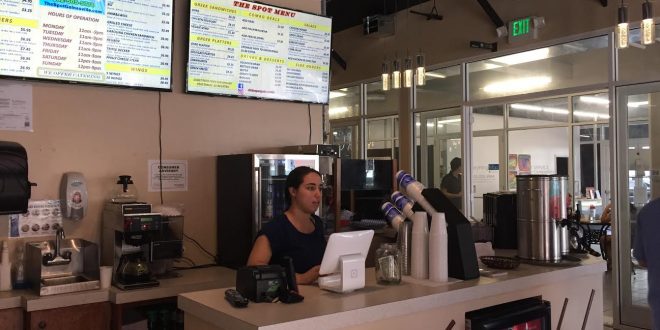 The Spot cashier Rose Machado, 21, works at the Gainesville restaurant on Tuesday. The Gainesville Area Chamber of Commerce hopes the upcoming administration will put forward tax reforms that will help The Spot and other local businesses. (Nate Phillips/WUFT News)

Officials with the Gainesville Area Chamber of Commerce are hoping that federal tax reform will accompany the new presidential administration and its effects will give a boost to business in the University City.

“Our vision is that this region would be the global hub, or at least a global hub, of talent, innovation and opportunity,” said Kamal Latham, the chamber’s vice president of public policy. “Central to that is having a business climate that allows businesses to flourish.”

In October 2015, the chamber issued a statement pushing the incoming administration to lower business-tax rates and simplify the tax code within its first 100 days — though it didn’t offer a specific route for doing so.

Now with President-elect Donald Trump’s inauguration two days away, the chamber is reiterating its position and plans to push it by backing the Commission on Fiscal Responsibility and Reform’s quest for comprehensive tax reform.

Latham said the chamber isn’t offering support for anything specific beyond that for the commission and its decisions.

“There are a lot of smart people that study this issue, and we hope that a lot of great ideas will bubble up to the surface,” he said. “We hope that, at the end of the day, federal policies that come forward will aim at incentivizing innovation.”

Chamber spokeswoman Alyssa Brown said the 2015 resolution stemmed from the wishes of members within the chamber. With about 1,400 businesses represented, the chamber is constantly working to improve the area’s business climate and meet its members’ needs, she said.

“Our members are at the heart of every action that we take,” Brown said, “and for many years, our members have addressed the need to reform taxes.”

According to Trump’s campaign platform, all businesses — no matter their size and income — will pay a flat 15-percent income tax rate. This reform, according to the platform, will allow small businesses to flourish and reduce the likelihood of them outsourcing their work.

Although Trump’s business promises were sometimes overshadowed during the heated presidential campaign, chamber officials are hopeful he will take on the issues facing the federal tax system and alleviate burdens placed on small businesses.

Redi Kola said he’s excited about the prospect of tax cuts, “but it almost sounds too good to be true.”

A co-owner of the Greek-American restaurant The Spot on West University Avenue in Gainesville, Kola said business tax cuts would help new investors participate in and contribute to the local economy.

“I know a lot of people that are scared to invest right now,” he said. “Businesses do better with time, but it’s not easy to start one.”

The Spot, which opened in 2015, pays an average tax rate of about 30 percent, Kola said.

Although that percentage sometimes varies depending on monthly earnings, Trump’s promised 15 percent tax would benefit The Spot greatly, he said. If such reforms are passed, he said, the business could begin to look to expand and hire more employees.

Jan Patterson, owner of the coffee shop Patticakes, said the success of her business’s original location, in the Haile Village Center, helped her receive approval from the Gainesville Community Redevelopment Agency to open a new location in Bo Diddley Plaza.

Patterson said she didn’t want to speak on a flat business income tax rate but that she applauds the chamber’s efforts to assist local businesses.

“The president-elect has said that he will make it easier for businesses to do business, and I hope he follows through with that promise,” she said.

Latham said he hopes the chamber’s push for tax reform will be addressed efficiently at the federal level.

“We have a lot of brilliant people here in the Gainesville region who have given their life’s work to inventing things and launching companies that are outgrowths of their intellectual genius,” he said.

“Any federal policies that deal with taxation, at the end of the day, should give an incentive to innovators and entrepreneurs to keep going and investing in their businesses.”