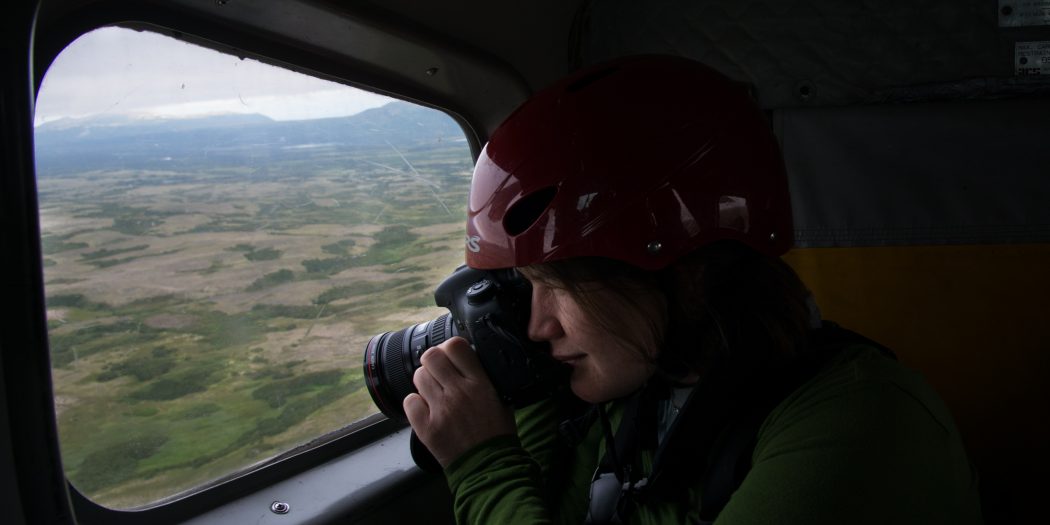 If they want to be an explorer, we should support them. – Gabby Salazar

Gabby Salazar of London first picked up a camera when she was 11, and has gone on to become a well-known professional in nature and conservation photography. She served as the youngest director of the North American Nature Photography Association (NANPA) and has received numerous accolades, including being named BBC Young Wildlife Photographer of the Year in 2004. In 2010-2011, she documented the creation of the Manu-Tambopata Conservation Corridor in Peru as part of a project funded by Fulbright and a National Geographic Young Explorers Grant. More recently, she worked on a conservation photography project in Mauritius, which culminated in an art show with the U.S. Embassy. Salazar has led photo workshops for kids, including a trip to Ireland last summer to teach high school students about photography as part of National Geographic Student Expeditions.

Salazar was interviewed by conservation photographer Jennifer Adler, a fellow National Geographic Young Explorer who is working on her Ph.D. in interdisciplinary ecology and communications at the University of Florida.

JA: You’ve done a lot of work with kids – what motivated you to start working with kids?

GS: I started really young; I was 11 years old, so it was a really strong force in my life growing up, both giving me something creative to do and also connecting me with nature and natural history. And I think ultimately there were a number of people who were influential in getting me interested in nature, and that was really important in my development, so I wanted to bring that experience to other kids. I realized early on that adults have so much going on in their lives that it’s really hard to connect with them and to get them to care about something and to actually motivate them to take action beyond that caring. [With kids] you have this ability to make an incredible impact in this short space of time. In a 1-hour photography workshop in the field you can actually have huge impacts on that student’s development and their career trajectory and what they’re interested in later on and hopefully on conservation measures. I think that maybe seeing those impacts play out over time has motivated me to work with kids more and more over the years.

JA: You mentioned that you’ve been a photographer since you were 11 – how did that come about and did the place you grew up have a bearing on your becoming a photographer so early and sticking with it?

GS: Yeah absolutely. So, I started photography because of my dad. He was a photographer and I was an 11-year-old girl and we didn’t have much to do and share together, so he gave me a camera as a way for us to have a hobby to pursue together and it turned out really well… it became a really strong part of our relationship. And I think it’s also that I grew up in a rural area. We had five acres of land at our home and we had a bird garden that my dad and I worked on together and we would put out flowers or butterfly bushes which attract pollinators. I was able to go out and do a lot of photography right in my backyard or right nearby, and I think that anybody can, even if they don’t have a 5-acre backyard. I think being able to walk outside and find that space and the creativity right there was really important.

JA: You recently taught photography to high school students on a National Geographic Student Expeditions trip to Ireland. What was the most interesting thing you learned from the students?

GS: They were really smart and really hard working. I learned that maybe a lot of high school students these days don’t see time for creativity. They’re so connected online (and I feel the same way), through their phones, and through social media, and they don’t have as much head space to just step back and be out in nature or explore. I really appreciated observing that transition: Watching them disconnect and watching the joy they had from it. That kind of inspired me to disconnect more as well, because I think it’s really hard to see that in yourself sometimes, but when you see other people experiencing that immersion and creativity, it really inspires you to do it yourself.

JA: You’ve mentioned that you particularly enjoy presenting to women’s groups and girls schools.  Why is this especially important to you?

GS: When I’m looking for role models in my career and my field I have a lot of male role models, but I’m particularly inspired by women who have been able to navigate all of these different choices and career paths. Annie Griffiths is a photographer that comes to mind who has managed to be one of the world’s top photojournalists while also having children and partially working in the field. I really enjoy working with girls’ schools and groups because I think girls are looking for role models that fall outside of these trajectories that we’re told we should follow or our mothers have followed and they’re really looking for women who are pushing different boundaries. When I do presentations, I don’t just present about myself – I actually include 5 or 6 of my female friends who are about my age in my presentations, and I say “this is my friend Alice who works in Antarctica studying bacteria….” It’s not so much about me as it is showing them that there are all these different paths and it doesn’t matter which one they choose, but it’s no longer just nurse, doctor, lawyer, pharmacist, which are all wonderful professions, but if they want to be an explorer, we should support them.

JA: Since you started, have you seen the gender make-up of the field of nature and conservation photography change at all?

GS: Yeah absolutely, I think that we’re seeing a lot more women pursuing photography, definitely at the amateur level. The meet-up groups we have at NANPA, which are these casual groups that get together and go out, some of them are predominately women. I really love seeing all of these people come together to go out in the field together. We’ve heard from women that they love these meet-up groups because they don’t want to go out alone to photograph with all of their expensive camera equipment, like at dark by a river. But they’re super thrilled to do it with 3 or 4 other people. So I do think we’re seeing more females at the amateur level, and at the professional level I think there are more women of all ages who are starting to get into it. I think the more women we have reaching these higher levels in photojournalism, the more who will come out because they really will have those mentors. I had a lot of strong female mentors who are much more established in their careers and that’s been really important for me.

JA: As a woman in the male-dominated field of nature/conservation photography, do you feel that there are particular disadvantages? Advantages?

GS: I think that there are some big advantages in some ways. One of the advantages is there are fewer women, and sometimes I get invitations to speak or to contribute, hopefully because of my talent, but also because there are fewer women filling those slots. As far as a disadvantage, I think that we do tend to mentor people when we see something of them in ourselves. I do the same thing when I go to girls’; schools and I look at women I can relate to in some way, so I don’t blame anyone for that. But I do think that one of the disadvantages is that there just happen to be more men at higher levels in photojournalism, so it has been more challenging to find mentors in the nature and wildlife photography community who are really strong mentors and willing to help kind of lift you up in the field if you’re a woman.

JA: Do you have specific advice for young women in the field? Words of wisdom or tips?

GS: My advice for women in photography is the same advice I’d give to women across any discipline. You have to be aggressive and knock on doors and put yourself out there. In photography unfortunately it has become a lot about self-promotion, and I do think that it’s been pretty well documented that women tend to lean back a lot instead of lean in. You do really have to go out of your way to say, “I’m going to apply for this, even if I’m not going to get it.” We don’t have to be perfect to put ourselves out there and put ourselves forward. Because the people who are emerging in this profession are not always the most talented; they’re sometimes really talented, but they may be good at self-promotion, and I think those are the people who are getting all of the opportunities. So I think that you’ve got to be one of those people.