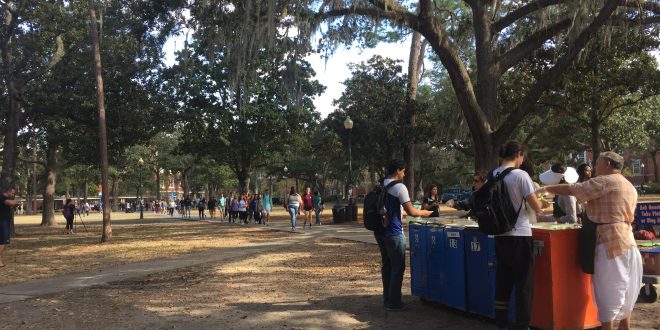 University of Florida students pick up Hare Krishna lunch Monday at the University of Florida's Plaza of the Americas. Renovations on the plaza, which include better drainage to prevent grass-killing flooding, are set to start this week. (Mariana Riquezes/WUFT News)

UF To Start Plaza Of The Americas Renovations This Week

One of the University of Florida’s most iconic outdoor spaces is set to undergo $2.2 million in renovations starting this week.

When it’s all done, the Plaza of the Americas will have expanded sidewalks, an underground flooding-prevention system, a dedicated place for presentations and public speaking, and another place specifically for the Hare Krishna lunch.

Hare Krishna lunch, a popular daily event at the university that has members from the nearby Krishna House feeding vegetarian and vegan lunch to students, presently takes place on a busy pedestrian corner of the plaza.

But the renovations will provide a permanent place outside that’s not as much in the way of walking students.

“We believe it will help the traffic a little bit,” said Carl Woodham, Krishna House’s chaplain. “Sometimes it gets very congested [because] so many people come for lunch.”

Other renovations include electricians creating Wi-Fi improvements and additional benches and tables. The six months of construction will be split in half, with the east side of the plaza being fenced off and closed starting sometime this week, and the west once that side is done.

The biggest chunk of the $2.2 million will go towards renovating underneath the plaza for the improved drainage, said Bob Cohen, a Krishna House board member who got the organization involved with the project.

He and Woodham said they learned much about the project by attending a UF Foundation meeting on it.

“They are going to work on the drainage underneath the plaza so that the grass will grow better,” Woodham said.

Kristel Bataku, a graduate architecture student at UF, visits the plaza several times a week for Krishna lunch. She said she usually sits on surrounding tables and benches because the plaza’s lawn is dead and covered in dirt.

“It is hard to find a spot in the grass to sit because it is unpleasant,” Bataku said Monday while eating Krishna lunch.

But Bataku said she sees a lot of potential in the renovation.

Cohen said he felt it was important for Krishna House to show interest in the project because the organization has been a tradition at UF for more than 40 years.

“Krishna House is delighted to team up with the University of Florida Foundation to do something for everyone’s benefit,” he said.

According to Woodham, Krishna House has raised more than $175,000 to contribute to the renovation.

“We have approached graduates from UF, people who appreciate the lunch who enjoyed it while they were here, and asked them to donate to the university for this plaza renovation,” he said “We felt it was the least we could do to try and help and cooperate with the university to make the plaza a better place since we use it all the time.”

Mariana is a reporter who can be contacted by calling 352-392-6397 or emailing news@wuft.org.
Previous Police: Clay County Store Clerk Shoots, Kills Robber
Next Gainesville Charities See Increase In Donations During Holiday Months

While COVID-19 has hindered some local businesses, another new frontier is thriving: social media.