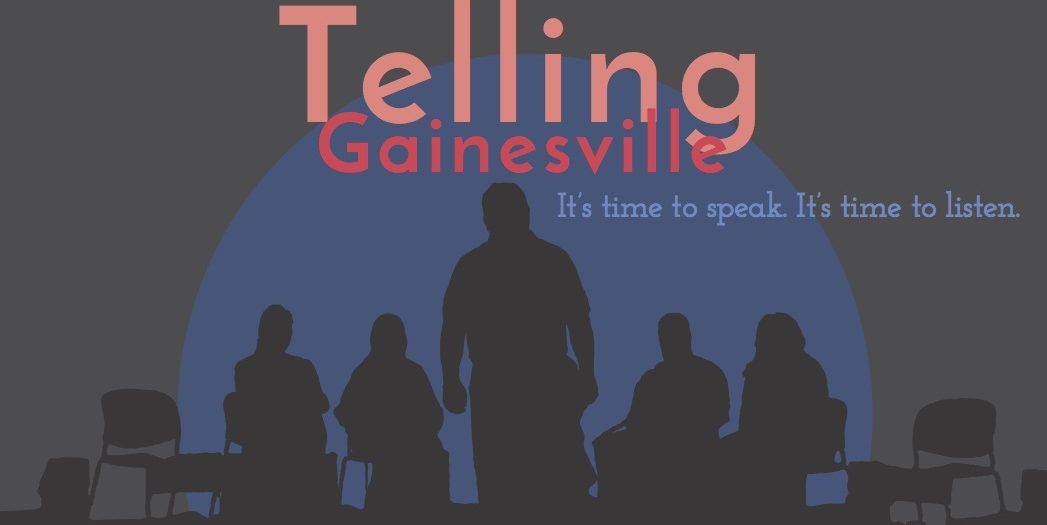 Five veterans will tell their stories of serving in the armed forces and returning home in a performance event being held this week.

Telling: Gainesville is a play that will feature the first-hand accounts of U.S veterans who served in Afghanistan, Iraq and Vietnam, and will enable the audience to understand and reflect on their experiences, according to a press release.

The event is being hosted by the Center for Arts in Medicine at the University of Florida in collaboration with the Center for European Studies. The play is part of The Telling Project, which is a national non-profit that uses theater to help people better understand the military and veterans.

Jeffery Pufahl, the director of the show, said that the idea came out of a desire to work with veterans as part of a community building project. That led him to connect with The Telling Project.

“It’s a deep storytelling experience where you really get to see inside the lives of the veterans,” Pufahl said.

The event is being funded by a grant from the Florida Humanities Council, and a grant through the Center of European Studies’ program Dialogues on the Experience of War.

Pufahl said that they found the veterans through posters and fliers, did two hour interviews with 10 veterans who gave their oral history, and selected the top five to participate.

Victor Lopez, who served in the U.S Army for four years, said that he wanted to be involved with the project to create more awareness of the veterans in the community.

“I’m a student at the University of Florida, and whenever I say that I’m a veteran it’s entirely a huge shock,” Lopez said.

Lopez said that before the project he didn’t get to spend as much time with other veterans as he would have liked to, and sometimes felt like an outlier around his classmates.

Lopez said that his role in the event has helped him to realize just how many other veterans there are like him. By sharing their stories and getting to know each other, Lopez said, he realized how much they had in common.

“I felt very comfortable. I didn’t feel like I was the only one,” he said.

Lopez said that he hopes the audience comes to the show with an open mind, and are ready to see an honest account of what it’s like to have served, and how it feels afterward.

“All you hear about is the movies and how Hollywood portrays the military, but you don’t actually see us when we get out and that we’re trying to transition back into our civilian lives,” he said.

Lopez said that he hopes that similar events can happen in the future, and not just on Veteran’s Day. He said he would like to see something like an Open Mic, where veterans can speak openly without feeling ostracized or judged.

“Veterans struggle every day,” he said. “Sharing experiences actually helps us, it makes the transition a lot easier.”

Pufahl said that although the show is held in a theater setting, it would be hard to describe what audience members can expect from the experience.

“The beauty and the depth of the stories hit you on a very personal level,” he said.

The shows will take place daily from Nov. 10-19 at the Actor’s Warehouse in Gainesville. Admission to the show is free.

Amalie Batchelder is a reporter for WUFT news, and can be reached at 352-392-6397 or amalie.batchelder@gmail.com.
Previous Florida Mental Health And Substance Abuse Program Grant Renewed
Next ‘Wild Spaces Public Places’ Amendment Passes