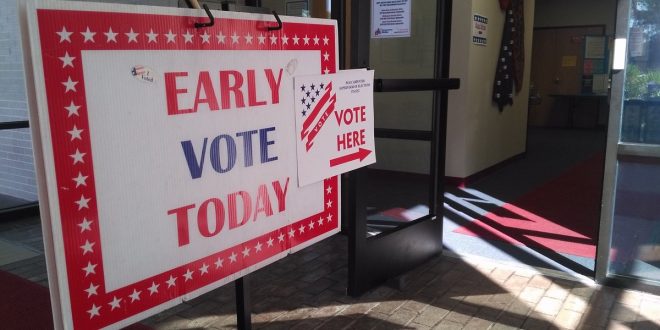 The entrance to the Alachua County Supervisor of Elections Office in downtown Gainesville earlier this month at the beginning of early voting. Residents in many Florida counties have until Nov. 5 to vote early. (Ramsey Touchberry/WUFT News)

Like the other more rural communities in Alachua County, Micanopy doesn’t have as much when compared to the larger city of Gainesville. But when election season rolls around, one missing component especially pops out: an early-voting site.

It’s a place that Regina Ferguson said she would take advantage of if given the opportunity.

“But since there isn’t,” the 36-year-old Micanopy resident said Monday from the city’s downtown, “I’ll just wait until everybody else goes on Election Day.”

In Alachua County, there are three early-voting sites for the 177,795 active registered voters in the county. That’s 59,265 for each of the three sites, which are all in Gainesville.

The sites — the same ones used in the 2014 election — form a triangle in the middle of the county and allow for the best access for the county as a whole, said Pam Carpenter, the county’s supervisor of elections.

Each county differs in its number of early-voting locations, she said, mainly because every location must fall in line with certain requirements: being on bus lines and available for two weeks, and having parking and disability access.

“We certainly looked into expanding the facilities and trying to get into maybe one of the libraries up at the Alachua-High Springs area, and that just didn’t work out for this election,” she said.

Carpenter, who isn’t seeking re-election, said she thinks the new supervisor, Kim Barton, will have some other options for incorporating additional early-voting sites.

“That’s why we always talk about voting as easy as one, two, three,” she said.

The county — which has about 89,000 more residents than Alachua — has nine early-voting sites for its 230,696 active registered voters, which averages to 25,632 voters per site.

Wilcox said the decisions of how many sites and where to put them is up to the supervisor’s discretion.

“Each supervisor in each of the jurisdictions attempts to decide what is the most logical, economical and efficient locations for each of their jurisdictions,” he said. “So there’s really no by-the-book statutory requirement.”

In the 2006 elections, Marion tried to get a site in each of the four quadrants of the county as well as at the elections office,Wilcox said. (Turning supervisor of elections offices into early-voting sites is required by law.)

In opening three new early-voting sites for this election, Wilcox said he targeted areas — all in the southern half of the county — that have been underserved historically and have seen strong early-voting turnouts as well as greater population growth.

Both Carpenter and Wilcox said they foresee this election having a relatively large turnout.

In 2008, 22 percent of Marion County residents voted at early-voting sites, Wilcox said. That percentage dropped slightly in 2012, but he suspects they’ll top 22 percent this year.

“It really could get 24, 25 percent of the population using an early-voting site,” he said. “I think early voting is getting more popular as we go.”

Alachua County already saw a boost in election numbers in the primaries in August. Carpenter said this could be because of all the energy and interest in this election season.

“We normally average with the presidential elections somewhere between 70 to 80 percent” voter turnout, she said. “I think this one is going to be more in the 80 percent range.”

Carpenter said she’s received more than 33,000 requests for vote-by-mail ballots, and Monday’s figures show that 10,000-plus of those have been returned.

“I would encourage everybody who’s voting by mail to go ahead and make their choices, do their homework, and get those ballots in the mail so that they get here before 7 p.m. on Election Day,” she said.

Cecilia is a reporter for WUFT News and can be contacted by emailing mazanecc@ufl.edu.
@@CeciliaMazanec
Previous Oct. 24, 2016: Afternoon News In 90
Next Florida Votes 2016: Marion County Sheriff