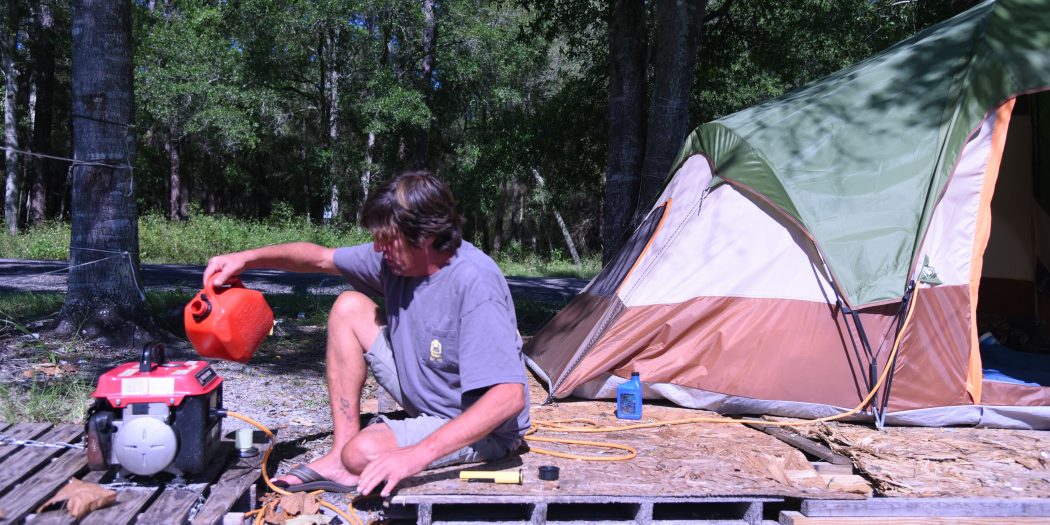 Brice Kinney finally gets the chance to fill his generator with gasoline after he was forced to evacuate Thursday. He said he was on his way to buy gas when he was told to evacuate and if he didn’t he would be permanently banned from the Dignity Village property. (Mariana Riquezes / WUFT News)

Dignity Village Residents Move Back In After Matthew

Two Dignity Village residents were arrested after police say they refused to leave the homeless camp next to GRACE Marketplace in Gainesville during Hurricane Matthew.

This came after city officials declared a mandatory evacuation of the property, said Ben Tobias, a spokesman for Gainesville police.

“A tent would not have offered any protection for the winds and rain and storm that was expected to hit our area,” he said.

Paul C. Allen and David L. Deegan were arrested because they refused to evacuate after numerous requests from officers to do so Thursday, Tobias said.

“There is a statute in the Florida law books that allows officers — and as a last resort — to make an arrest for violation of disaster preparedness or an emergency-management order,” he said.

Dignity Village residents were notified of the mandatory evacuation and many went to the adjoining GRACE Marketplace buildings or were provided with transportation to area shelters, Tobias said. Most residents expressed gratitude for the assistance, he added.

On Monday, the residents were settling back in.

Brice Kinney, who has lived at Dignity Village for two years, said he and his girlfriend decided to use the rest of her Social Security money and stay at a hotel on 13th Street instead of the shelter.

“At first, I didn’t agree with [the evacuation] until I seen on the news and that Hurricane Matthew was tearing up quite a bit of stuff,” he said, “So I feel like they were trying to be safe about it.”

He said Dignity Village residents are often invited into the marketplace buildings during severe weather. People already live in them, he said, but the capacity limits can be stretched because of weather.

“Whenever it’s cold outside or there’s a tropical storm or there’s a hurricane, we go into our standard emergency operation mode,” DeCarmine said. “What that means is, we start opening up some of the buildings that we have here.

“We let 20 people stay in our welcome center, 38 people can stay in our training building, and then we have other buildings that we can make room for people.”

Mariana is a reporter who can be contacted by calling 352-392-6397 or emailing news@wuft.org.
Previous Police: Gainesville Man Exposes Himself To Children At Fanning Springs
Next Hundreds Of Putnam County Homes Still Without Power After Matthew