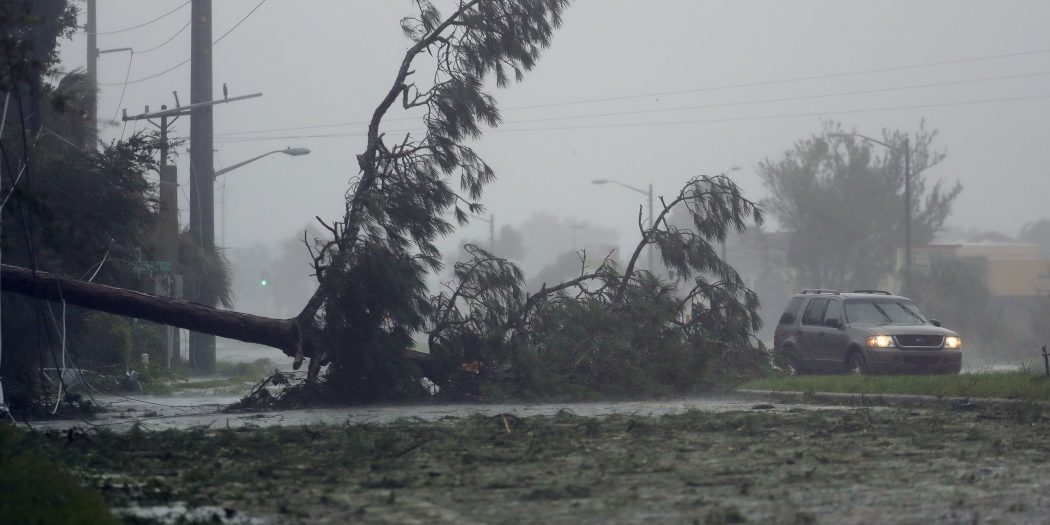 A car drives past a downed tree as Hurricane Matthew moves through Daytona Beach, Fla. Friday, Oct. 7, 2016. Matthew was downgraded to a Category 3 hurricane overnight, and its storm center hung just offshore as it moved up the Florida coastline, sparing communities its full 120 mph winds. (AP Photo/Charlie Riedel)

With recovery efforts underway south of Brevard County after Florida’s Southeastern coast was pummeled by Hurricane Matthew, Gov. Rick Scott warned Friday morning that the state is only half-way through the powerful storm.

“It could be the worst part of this is still to come,” Scott said after a morning briefing at the state Emergency Operations Center. “I’m really concerned about Jacksonville.”

Large parts of Jacksonville and surrounding areas are low-lying and subject to storm surges and flooding, Scott warned.

The hurricane — with maximum sustained winds of 120 mph — lashed the coast as the sun rose Friday, with its eye located about 45 miles off shore of Cape Canaveral and Daytona Beach.

The system, forecast to head back towards Southeast Florida after approaching South Carolina this weekend, was moving to the northwest at 13 mph Friday morning, according to the National Hurricane Center.

Matthew knocked out power to more than 600,000 homes, and more than 22,000 people sought shelter after massive evacuations Thursday targeted more than 1 million residents.

One death in Florida is being attributed to the storm.

In Port St. Lucie, a 58-year-old woman reportedly suffered a heart attack after the county suspended emergency-service operations, according to TCPalm. Scott and state Emergency Management Director Bryan Koon said at the 9 a.m. briefing that they were unaware of any storm-related deaths.

Early Monday morning, at least 600,000 homes were without power. But preliminary reports from South Florida counties were encouraging, with little damage reported.

The storm caused power outages in about half of Martin County and about one-third of St. Lucie County. Florida Power & Light — which had 10,000 workers available to deal with the storm — reported it had restored about 27 percent of its approximately 580,000 reported outages in affected areas.

But Scott, who is expected to travel to impacted areas later today, warned Floridians not to be complacent.

“We’re only half-way through. We’re going to have more outages,” Scott cautioned.

About 90 Florida Fish & Wildlife Conservation officers have already started performing search and rescue operations, and another 70 are on standby, the governor said.

“As the storm passes we’re sending them in to do assessments of both property and people,” Scott said. “They have not reported any issues yet.”

The Florida Highway Patrol did not report any major road issues, and tolls that had been lifted remained suspended Friday, Scott said.

Some gas stations had experienced temporary shortages, but the state has “plenty of fuel,” according to Scott.

The governor also said that there is still time for the storm, which pelted the coast of Florida’s peninsula overnight, to potentially shift west on Friday and make landfall.

Winds from the storm on its initial northern run are expected to be felt in the state through early Saturday morning.

The system has been credited with 280 deaths in the Caribbean, and that number could grow.

Previous Florida Votes 2016: State Senate District 8
Next This Is Not Over’: Hurricane Sideswipes Florida Coast

Nearly 50 Years Ago, Jimmy Norris Was Killed In Florida. The Cold Case Is Accelerating Thanks To New Leads

Nearly 50 years ago, Jimmy Norris was killed in Florida. Rosemary Norris-Southward was not quite 14 years old when she watched her brother walk out of their home for the last time. Forty-six years later, she said she feels closer to James “Jimmy” Norris than she has in decades.