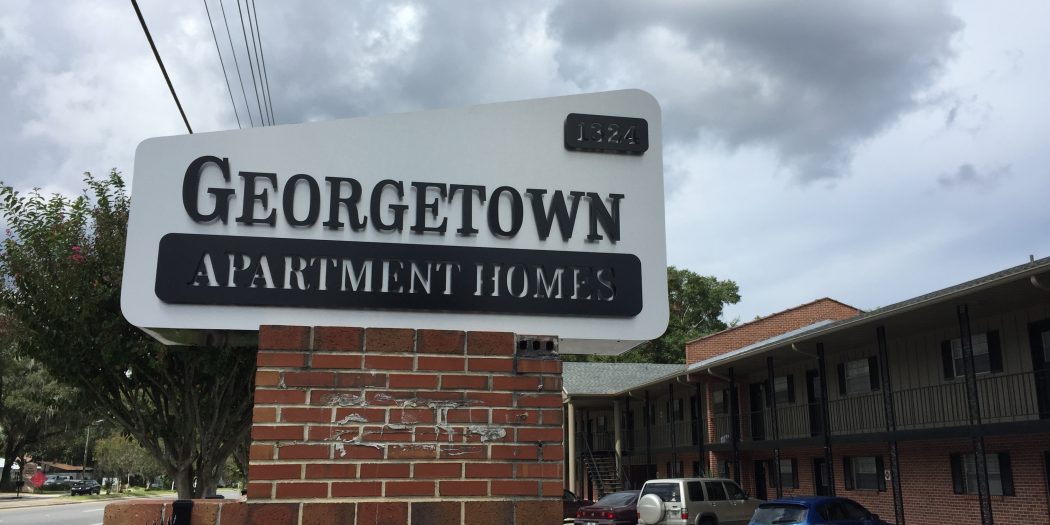 In the wake of numerous clown sightings across the country, another one was spotted in Gainesville Tuesday night.
Danielle Curley, a resident of Georgetown Apartments located at 1324 NW 16th Ave., had just taken out the trash when her sister said she heard strange noises coming from outside. Curley, 27, then went to check and said that she saw a man dressed as a clown standing by the complex’s back gate.
“He had on all black – he had a black and white mask on with clown hair, and he was just staring at us, making noises, trying to get our attention.”
Curley then immediately went inside her home and called 9-11.
“It’s not funny. I have a family – my kids don’t like being scared, I don’t like being scared,” Curley said. “If it’s just a joke, just stop the jokes, save it for Halloween.”
Gainesville Police Department spokesman Ben Tobias said GPD received the call at about 11 p.m. and by the time officers arrived at the complex, the clown had already disappeared.
“It’s a point of concern for us because what people think may start out as just a small prank could end up leading to other things down the line,” Tobias said. “For instance – let’s say the person that you’re trying to scare is a concealed-permit holder, and they are in fear for their life. They don’t know what’s going on, and they produce a gun and shot someone over this. That’s something that you really have to think about if you’re deciding, ‘Is this a prank that I really want to do?’”
Rayna Bradley, a 26-year-old resident at Georgetown Apartments, said that while she didn’t see the clown herself, she is concerned about another incident in the future.
“There’s kids out here – there’s a school there, a school up there. Little kids play, some of them sneak out at night,” Bradley said. “I’m not leaving the window cracked anymore.”
Tuesday’s incident is just one of many in a recent flood of clown sightings across the country.
On Thursday in Ocala, a Facebook user posted a video of a person in a clown mask standing at the edge of the tree line at night, and the video has since gained over 1.2 million. Two clowns were spotted in Palm Bay Sunday by a woman walking her dog.
The creepy clowns are becoming an issue on college campuses, as well. The York Daily Record in Pennsylvania reported that York College released a campus-wide safety alert to notify students and faculty that the school’s safety department has responded to eight clowns reports since Saturday.
Sgt. Jeff Lamb with the University of Florida Police Department said that there have been no reports of clowns on campus at this time.
“However, we would like to remind everyone to, as always, be vigilant and report any suspicious activity, or incidents or people to the police department immediately so we can investigate them,” Lamb said.
Florida State Statutes 876.13 and 876.14 say that no person is allowed to wear a mask, hood or any other item that conceals the identity of the wearer on any piece of public or private property in the state. Statute 876.20 says that it is unlawful to wear a mask, hood or any other item to conceal one’s identity with the intent of intimidation.
So far, no states have reported arrests of any clowns.
Florida Gainesville Gainesville Police Department Ocala University of Florida 2016-09-28
Courtney Culbreath
Share

Courtney is a reporter for WUFT News and can be contacted by calling 904-662-5964 or emailing court1115@ymail.com.
Previous President Obama Approves Disaster Declaration For Florida
Next Election 2016: Fact And Fiction Swirls Medical Marijuana Debate