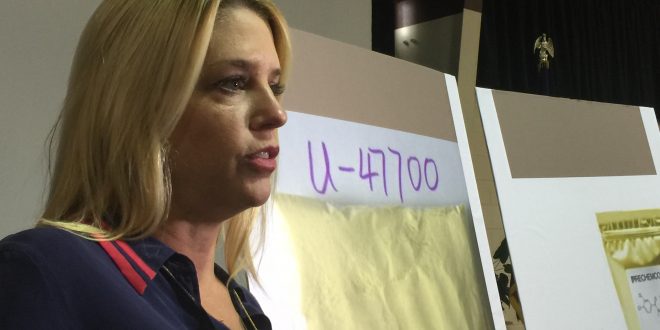 The drug, manufactured in Asia and sold online, first surfaced in the 1970s and is smuggled to the United States and Canada from Mexico, Bondi said at a press conference at the Marion County Sheriff’s Office. It acts as a pain medication and is at least 7.5 times more powerful than morphine.

Having no legitimate health benefits, the drug is sometimes used to cut heroin, cocaine, Xanax and the pain medication fentanyl, another pain medication more potent than morphine.

It comes as powder, pills and even nasal sprays, Bondi said. A billboard on display at the press conference listed the online price for U-47700 as $39.80.

Bondi said the drug is a “lethal cocktail” that some call “pinky” because of its pink color.

The attorney general’s signature makes possession of the drug a third-degree felony in Florida, punishable by up to five years in jail.

Bondi listed the eight confirmed overdose deaths from this year in Florida involving U-47700.

Five of those deaths came in Pinellas County from pills that mixed U-47700 with Xanax, she said. The other three happened in Bay County in the Panhandle.

A synthetic drug typically “starts with the Panhandle and trickles down our state,” the attorney general said.

U-47700 has not been reported outside Bay and Pinellas counties, Bondi said, but that’s because it had been hard to quantify prior to becoming illegal Tuesday.

Bondi said the reason she held the press conference in Marion County is because she wanted it to be close to the University of Florida to discourage students from buying Xanax outside a drugstore.

Marion County Sheriff Emery Gainey said at the press conference that county deputies aren’t aware if they’ve come across U-47700 yet but will now test confiscated drugs for it.

“Now that we have something to enforce, we will,” he said. “We’re always behind on the game on this because the chemists are constantly changing the makeup of these synthetic drugs.”

As of Tuesday, U-47700 had already been made illegal in three other states: Wyoming, Ohio and Georgia.

“Anyone attempting to mix and distribute this with other drugs, we are coming after you,” Bondi said, “because we are going to save lives.”

Video report below by Alexa Lightle:

Briana is a reporter for WUFT News and can be contacted by calling 352-392-6397 or emailing bri.rose561@gmail.com.
@brianarerick
Previous Gators Officially Name Stricklin As New Athletic Director
Next Fla.’s Death Penalty On Hold As Court Looks For Answers