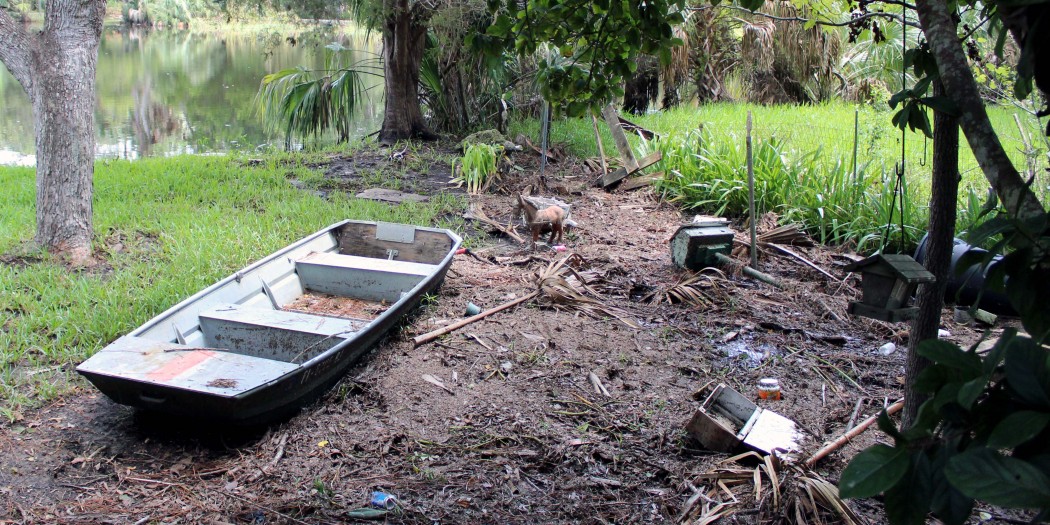 The backyard of June Proffit, 92 years old, was ravaged by the flooding and winds of Hermine. A random boat was carried onto her property from the flooding, and left there after the water left. (Josh Kimble/WUFT News)

Nearly a week after Hurricane Hermine swept through Florida, the locals in Yankeetown still struggle to rebuild their lives.

The Hurricane brought storm surges, heavy rain and high winds, devastating the town and flooding homes. Furniture and debris litter the roadside as residents have been forced to throw out their ruined belongings.

For most people in the area, the Yankeetown-Inglis Women’s Club has been the only source of help. The women who have volunteered, many who are over 70 years old, have done whatever they can to be a part of the relief effort.

“We have a group of our members here out in the community today and during the past several days,” said Roberta DeGroot, a volunteer at the club. “They’re helping with the flood victims and helping them move furniture out, or whatever else they need.”

“This area is a small community,” said DeGroot. “We’ve been able to accomplish so much more this year because of the fact that (residents of Inglis and Yankeetown) have been working together. And certainly the women’s club was a big factor in helping out.”

The Women’s Club, which includes a thrift store, also provides a space for the Federal Emergency Management Agency (FEMA) and the Salvation Army to gather in the area.

One of the residents hit hardest by Hermine was 92-year-old June Proffit, who looked upon her house of 38 years and saw it flooded with 5-foot-high waters. A boat even washed into her yard from a nearby lake. Proffit remained safe by staying with her neighbor whose house stands 14 feet above the ground.

“You just couldn’t believe it — because you saw nothing but water everywhere,” Proffit said.

Lt. Scott Tummond of the Levy County Sheriff’s Office said that FEMA would be sent out on Thursday to calculate the cost of the damage left by Hermine.

While the Sheriff’s Office has been doing all it can to help out, Tummond estimated that it would be at least 30 days before the two areas most affected, Yankeetown and Cedar Key, could be back to a state of normalcy.

“Our emergency operation center is still up and running. They’re still working on making sure all contacts at the state level have been made, and all the resources needed in these communities are coming in,” said Tummond.

“We want our citizens to know that the Sheriff’s Office and the Emergency Operation Center have their well-being at the top of our list.”

Josh is a reporter for WUFT News. He can be reached at news@wuft.org or 352-392-6397.
@@KimbleUF
Previous Florida Researchers Seek To Replace Harmful Pesticides With Bats
Next Sept. 8, 2016: Afternoon News in 90