Huiwei Shen, project manager for the I-75 Relief Task Force, presented their proposals to the MTPO Monday night in Gainesville. The task force, made up of community stakeholders representing economic development, environmental organizations, state agencies and members of the public, have held a series of meetings and open houses since late last year to educate the public and gather feedback on prospective plans to alleviate congestion along I-75, improve safety on the highway and promote economic growth throughout the surrounding areas.

The task force is charged with presenting its final recommendations to the Florida Department of Transportation by October 2016.

Shen told the planning committee that the traffic may not seem unusually congested on a daily basis, but the times of heavy congestion during football season and holidays lead to safety issues. Additionally, she said the task force was directed to provide options to enhance connectivity between Tampa Bay and Northeast Florida.

One of the plans includes building a new highway that would extend from the Suncoast Parkway 2 at S.R. 44 in Citrus County to I-75 in Columbia County, traversing through western Alachua County and metropolitan Gainesville. 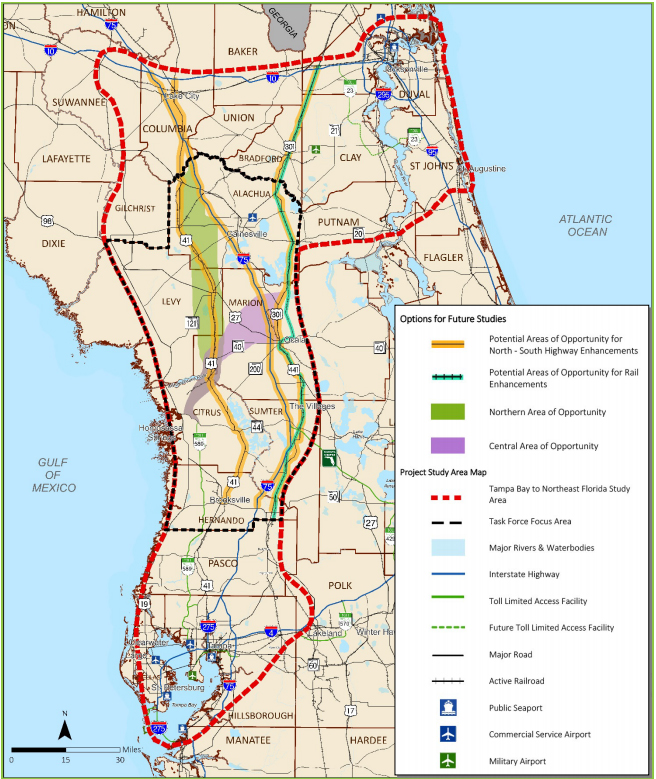 Last week, the Alachua Board of County Commissioners voted unanimously to release a letter to the task force that suggested a new highway through the western part of the county should only be considered after “significant improvements have been planned and programmed to existing corridors.” In the letter, the commissioners said:

The preference for focusing on improving existing corridors was echoed by some members of the Gainesville City Commission during the June 27 MTPO meeting.

Gainesville City Commissioner Harvey Budd said the biggest problem with traffic lies in the Marion County portion of I-75.

“The worst area is between Wildwood and 326. That is a really busy area,” Budd said. “Alleviating that problem would go a long way to solving a lot of the congestion that’s on the lower part of I-75 before you get to Wildwood. As you get further North I think you have less pressure.”

Alachua County resident James Dick said via phone, “There are ways to work on the existing roads to make them so much better before you even consider doing anything more. But then if you do anything more, you’ve got to really think, what is really your goal here? Is it to improve traffic and improve safety, or is it merely so you can open up another area for heavy land development?”

Dick is among a group of citizens who are opposed to the new highway proposal that could forever change the communities and ecosystems in the rural areas they live in by contributing to sprawl and heavy land development.

“We’ve brought those things up, but they just really don’t seem to want to listen,” Dick said regarding the task force.

Dick wants to see a bigger influence for the citizens who are dealing with the problems related to I-75 relief in their every day life.

Shen explained that the task force has yet to reach a consensus on the the proposed options.

Alachua County Commissioner Mike Byerly said, “One of the problems with the task force, of course, is that you don’t take votes, there is no formal actions, so whenever you speak of the will of the task force, that’s always a sketchy thing to do.”

Judy Etzler, of Gainesville, also questioned the task force’s use of the word “consensus” in their previous meetings, particularly the June 24 meeting.

“I don’t think they understand what consensus is, and to me that’s a very very important point, and they need to define it better,” Etzler said. “It was just all over the place at the last meeting, and there was no such thing as consensus.”

MTPO members eventually endorsed a letter of recommendation to the task force after some minor changes.

County Commissioner Mike Byerly moved to approve the staff recommendations for the task force (page 177 of the meeting packet), with the following modification:

The new language now reads “(r)ecommendations that are consistent with the Alachua County and City of Gainesville comprehensive plans in the year 2040 long-range transportation plans.”

The representatives voted unanimously to approve the staff recommendation for the task force with Byerly’s proposed modification.

The organization suggested the city commission look further into the issue at their next meeting as well, hoping they too might also recommend against any new highways being built through the county and greater Gainesville.

“The MTPO here in Gainesville doesn’t think that’s the best way forward for our area,” City Commissioner Adrian Hayes-Santos said. “Adding in those new areas will create sprawl and really destroy our neighborhoods.”

Previous HIV On The Rise Among Certain Groups, Despite Free Testing
Next Hundreds Gather For Orlando Shooting Vigil At UF’s Century Tower