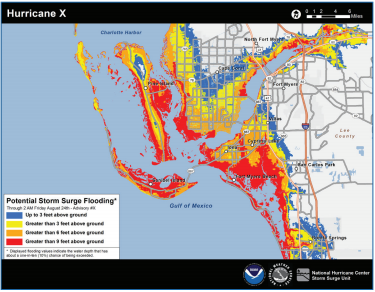 Storm surge is often seen as one of the deadliest effects of tropical cyclones and can cause dangerous flooding. With Hurricane Season about to be upon us, meteorologists are now out with a new tool to help better forecast storm surge.

“Although my home state of Florida has not seen a hurricane make landfall in almost 11 years, we must never sit idle and succumb to hurricane amnesia,” said Wednesday. “Innovation is the key to ensuring lives and property are spared by accurate forecasting. This hurricane season there are two new tools which will be at the disposal of our researchers and forecasters.”

Among the new tools is “the Coyote,” a drone that can fly into dangerous weather conditions and send data to the National Hurricane Center in real time.

Other tools deal with storm surge, which Rubio says is responsible for 90 percent of deaths associated with storms.

While some tools are still in the experimental phase, the Potential Storm Surge Flooding Map appears to be ready to go.

“The Potential Storm Surge Flooding Map, which began testing during 2014, will finally become operational this season,” Rubio added. “This map will highlight areas where storm surge could inundate areas and estimate the height at which waters could reach. One only needs to look at Hurricane Katrina to realize how devastating a storm surge can be. Not heeding storm surge warnings could be the difference between life and death. I applaud the National Hurricane Center for its work on this new tool and I stress the importance of educating people on the dangers of storm surge.”

And, Rick Knabb says he’s very proud of that map. As the Director of the National Hurricane Center in Miami, he was the key speaker during Rubio’s Wednesday hearing.

“I’m very excited to report to everyone about Potential Storm Surge Flooding Map going operational this year, and that is many years in the making with a lot of social scientists and partners involved in the development of that product, and it has been thoroughly tested,” he said. “We’ve gone through exercises with the Emergency Managers. We really think because of that it’s going to be a game changing tool for their evacuation decision making and communicating that hazard to the public this year.”

Knabb says there’s a misconception that those at risk for storm surge flooding are mainly areas near beach front properties.

“…Not just across the street from the beach front property, not just blocks inland, but in some cases miles inland from the coast,” he added. “So, it’s vital that people, even if you can’t see the water from where you are, at your home, find out today if you live in a hurricane storm surge evacuation zone and figure out today where you would go and how you would get there if told to evacuate. And, for folks who live far enough inland, in whatever part of Florida or any other hurricane-prone states , if you’re not in one of those storm surge zones, find someone you care about who is and plan now to be their inland evacuation destination.”

And, he says that’s why it’s even more important that the National Hurricane Center is going operational this year with the Potential Storm Surge Flooding Map.

“…because if people haven’t gotten it in by that time, then when that product comes out, if a hurricane is threatening that area, then we will be showing people just how far inland from the immediate coastline the storm surge flooding could go in that scenario,” he continued.

And, Bryan Koon, Florida’s Division of Emergency Management Director, adds it’s important people don’t get complacent. He’s urging everyone to develop some sort of plan because it’s only a matter of time before a storm does arrive.

“The flood zones…you know, they’re the 100-year flood zones, so it has a one percent annual chance of occurring,” he said. “But, some of the floods that we’ve seen in the last couple of years in South Carolina, most recently in Texas, those are 500 year events, and we’re going to see 500 year events in Florida the next time we see a hurricane or a tropical cyclone.”

The 2016 Atlantic Hurricane Season starts Wednesday and will lasts for six months. According to the National Oceanic and Atmospheric Administration, it’s likely that there will be 10 to 16 named storms during the season. Last year, there were 11.