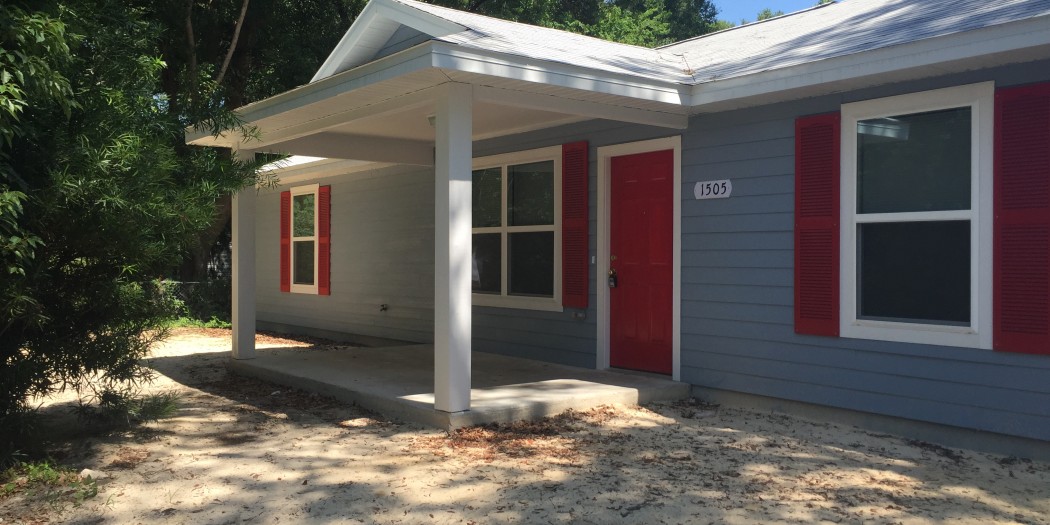 This home being built by Habitat for Humanity in is one of few homes in southeast Gainesville being built for low-income residents. Housing officials of Alachua County are pushing to give incentives to for-profit developers, so they can construct more affordable housing. (Matthew Brannon/WUFT News)

Breante Brown has spent her whole life in Alachua County.

And while Brown, 23, said she wants to own her own home where she can raise her 2-year-old, she won’t be finding it here.

“I do want to buy a house,” Brown said, “but I just don’t know if it’d be in Gainesville because the market is just so overpriced.”

Brown isn’t alone in her frustration. Alachua County has a housing problem.

“There’s a shortage of affordable housing,” said RD Bonner, a member of the Alachua County Affordable Housing Advisory Committee. “There (are) more people who need it than can get into it.”

He said one of the first steps to getting more people into their own homes is to have developers build more affordable housing.

At its May 19 meeting, the committee agreed on proposed incentives motivating local developers to build affordable housing.

If the proposed incentives are approved by the Board of County Commissioners by the end of September, developers could get wiggle room on certain regulations, making it cheaper for them to build affordable housing and cheaper for homebuyers to purchase.

“If a builder has an area where they’re building a subdivision, what do you think they’re going to do?” she said. “They’re going to build the higher-cost homes so they can make more money.”

The committee would like to have developers set aside certain units in a subdivision for low-income families, a practice called inclusionary housing.

“Inclusionary housing is a big thing here in the county that the board talks about a lot,” she said. “They want the developers to include some of the lesser-priced homes in those areas so it can be affordable. So we have more of a mix in the community, as opposed to the southwest side being all high-end (housing) and the southeast side being low-end.”

But it’s not as easy as it sounds.

“For a developer, affordable housing, there’s really not a payback, whether you’re building one unit or multiple,” said Scott Buchanan, who is president-elect of the Builders Association of North Central Florida.

“A piece of property is not 100 percent develop-able because of all the requirements,” he said. “Our local developer community, I think, would agree with me that it’s the regulations that (are) driving prices.”

He said Alachua County hasn’t come up with much to make building affordable housing worthwhile.

“Unfortunately, the county currently does not have much of a bag of tools, so to speak, that they could offer, or nothing that we’ve seen.”

“What I’m suggesting is that, if developers wanted to include affordable units as part of their project, for every one unit they set aside for affordable housing, they can reduce that requirement by a percentage or even half a percent,” Rockwell said.

Developers are also required to pay impact fees for using the roads adjacent to the construction property. Roads get more wear and tear from large construction equipment rolling over its asphalt. Builders would take the money they save and put it toward building more affordable units.

The demand for affordable housing affects many county residents, said Jeffrey Michael, the director of housing development for the Neighborhood Housing & Development Corp., a Gainesville nonprofit that works to house families.

“It’s typically people (whose) incomes are lower than the average. If you have a family of three or four, and they make $40,000 a year, it’s pretty tough to buy a house,” Michael said.

“So if there’s an affordable house out there, and you can qualify them, and they can have ownership and a good home for their kids, it’s a win-win for everybody.”

But until the Board of County Commissioners approves the incentives, families like Brown’s are left dreaming of home-ownership.

“You own your own property,” Brown said. “You have more freedom. You don’t have a next-door neighbor… making noise and waking you up.”

Alachua County will spend $2.5M in federal aid on a publicly-owned slaughterhouse