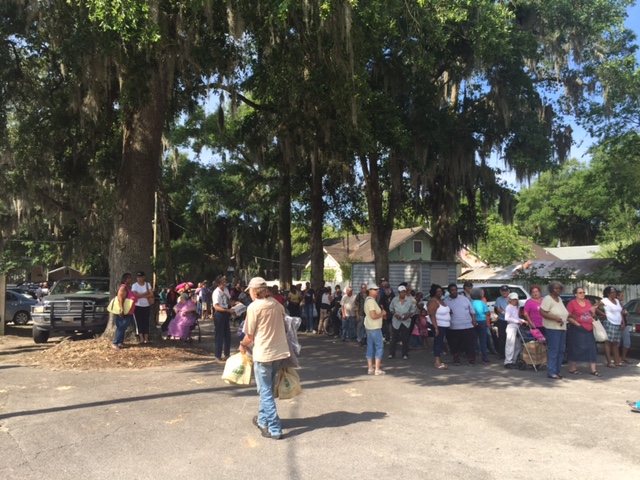 Brenda Manos is like a neighborhood mom, taking care of many others in addition to herself.

“She’s always calling me,” said Mary Phillips, Manos’s sister, referring to the times Manos will call about area food drives. Manos said she uses the drives to stock up on needed items for herself and others – sometimes even providing items to the local homeless in Downtown Gainesville’s Bo Diddley Plaza.

She was one of hundreds on Tuesday morning who came to the Salvation Army on East University Avenue to pick up bags of food brought by the Jacksonville branch of Farm Share Inc., a food distribution nonprofit that operates throughout Florida.

All told, food for over 300 families was provided.

“It helps me out, plus it helps my daughter out,” said Manos, who lives in LaCrosse. “Things I can’t use, I take over to her house.”

Rick Carpenter manages programs that Farm Share operates through the United States Department of Agriculture (USDA), including the Temporary Emergency Family Assistance Program (TEFAP), which provided the food on Tuesday.

Only providing enough food for a few days to each family, TEFAP is meant to coexist with and supplement other assistance programs, such as the Supplemental Nutrition Assistance Program (SNAP) or the Temporary Assistance for Need Families (TANF) program.

“What we’re giving out isn’t designed to last two or three or four weeks,” he said.

Served by volunteers primarily from The Church of Jesus Christ of Latter-day Saints, as well as a small number of volunteers from other area churches, individuals and families received amounts of food based on USDA guidelines. A single person receives less food than a couple, a couple less than a family of three and so on.

Farm Share is one of a number of nonprofits that distributes food to the needy in North Central Florida. Carpenter stressed, however, that there is no competition among these organizations.

“We’re all just trying to get the food out to the people,” Carpenter said.

The Jacksonville branch of Farm Share serves 11 Florida counties – including Alachua – in Northeast and North Central Florida, Carpenter said. The organization distributes 32 million pounds of food annually to Florida families, according to its website, and also has operations in Quincy, Pompano Beach and Homestead.

State Rep. Clovis Watson Jr., who represents the Florida House of Representative’s 20th district, was pleased by the turnout and the opportunity that was created for community members.

“You have those who are having to be torn between to pay a utility bill, to buy gas or to buy food,” said Watson, whose district includes much of East Gainesville and other parts of Alachua and Marion counties. “This is one way to ease that burden.”

Victor Matas, who has lived in Gainesville for 34 years and worked as a jeweler for 20 of those, is grateful for organizations like Farm Share and the Salvation Army. The amount he receives each month from Social Security simply isn’t enough, he said.

“Money goes in bills and gas,” he said, mentioning that he also brings extra food he receives to his 93-year-old mother.

He said the turnout on Tuesday was unusual, attributing it to the increased news coverage the food drive received in the days leading up to it. The food drive usually has 30 people, but he has seen with as few as 10.