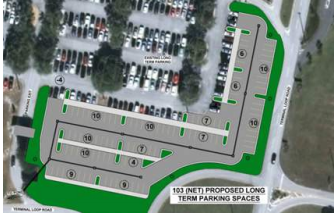 The Gainesville-Alachua County Regional Airport Authority is hosting a neighborhood workshop Tuesday to discuss a proposed expansion of its parking lot.

Airport officials said growth in passenger traffic has resulted in needed improvements. The airport spent $900,000 for new automated pay lanes in its parking lot in 2015 to help speed the exit of travelers parked there on busy days, according to a January 2016 press release. Additional parking would alleviate the need for travelers to park in overflow grass parking.

The proposed plan calls for 101 long-term parking spaces in the first phase of the project. Designs for two additional phases exist, though estimated costs and funding for the projects have not yet been determined, according to an email from Laura Aguiar, the airport’s spokeswoman. Aguiar said it’s unclear how much of the overall project will be completed this year.

The city requires residents be notified of projects like this, and the workshop will serve as notification, Aguiar wrote in the email.

The workshop follows a May 12 presentation by Oregon-based Sixel Consulting Group Inc. that looked at the feasibility of attracting additional flight routes to the Gainesville Regional Airport.

The workshop, which is open to the public, will be held at 6 p.m. in the Airline Terminal Board Room at the Gainesville Regional Airport, 3880 NE 39th Ave.