Before decorative pumpkins are tossed in the trash after Halloween and Thanksgiving, 48-year-old Johnny Green collects them from local residents to feed his chickens and pigs.

Pumpkin patches and corn mazes in Alachua County did similar things with their leftover pumpkins. Brad Hodge, who runs the Newberry Corn Maze, said he gives his cows the pumpkins that are still halfway decent when the maze closes.

Ron Sanderson, an associate pastor at the Gainesville Church of God, said the church’s leftover pumpkins from its pumpkin patch were donated to local pig farmers.

Green regularly feeds his animals non-genetically modified foods, including oats, wheat and sunflower seeds, but he said the pumpkins are a treat. He said he is hoping to find people who are like-minded to encourage local food and community involvement.

He collected about 20 pumpkins between Halloween and the week after Thanksgiving, he said. He got the word out through Facebook.

“It’s a no brainer,” Green said. “The benefits are tremendous.”

He originally got the animals for his family to eat because he wanted to grow and raise his food at home.

He hasn’t eaten any of his animals yet, but he has gotten eggs from the chickens.

Green also feeds his animals vegetables from his garden.

“Believe it or not, chickens love cooked collard greens, and it’s one of the highest percentages of calcium they can get,” Green said.

Green has lived in Micanopy for close to 30 years, and he said he thinks more food should be grown and bought locally.

Megan D’Andrea, 25, started a Facebook page called Micanopy Matters. She saw Green’s post on her page and delivered a pumpkin to Green’s house with a note written on it that said, “Thanks for starting an awesome tradition here in Micanopy!”

“I thought that it was a really neat thing that he’s trying to start,” D’Andrea said. “Most people just throw their pumpkins away and let them rot away into the garbage.”

She said she was thrilled to see pictures on Facebook of all the “little cute farm animals” eating her pumpkin.

Some pumpkins were brought to Green’s house, and others he picked up. He picked up three from the Micanopy Town Hall harvest display Monday.

Green said he hopes more pumpkins will be donated next year.

Lindsay is a reporter who can be contacted by calling 352-392-6397 or emailing news@wuft.org.
Previous UF Student Wins International Essay Contest About Peace
Next Dec. 2, 2015: Afternoon News in 90 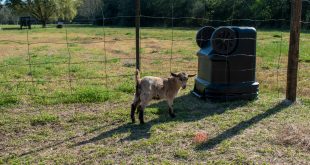