This month, people wanting to adopt a cat or dog can get one for half price at Gainesville Pet Rescue.

But they have to be looking to fall in love with a black one.

“They’re harder to adopt out,” said Stephanie Younis, shelter assistant at Gainesville Pet Rescue. “I don’t know why people have an aversion to black animals. It’s not just cats that get a bad rap though, it’s dogs too.”

“Unfortunately, there are still superstitious people out there that think black cats are a sign of bad luck and come with a curse,” Midler said.

While black dogs don’t necessarily have a bad superstition associated with them, people still avoid them, said Younis.

“It’s just a stigma—some people have blatantly told me because they [black dogs] look scary,” said Younis. “I think it’s the dark, ominous thing about them.”

The ominousness associated with black animals has deep roots, said Stuart Vyse, psychologist and author of “Believing in Magic: The Psychology of Superstition.”

“Superstitions with black cats can be traced back to a time when witches were feared,” Vyse said. “People associated black cats with witches and even thought black cats were witches in animal form.”

But not everyone shares those thoughts.

“I came to GPR this morning, and I was thinking about getting a little black kitten actually,” said Aaron Berger, a senior finance major at the University of Florida.

“I had a black cat in the past, but I had to let it go. I never thought twice about superstitions.”

Like Gainesville Pet Rescue, Newberry Animal Hospital also has lower adoption rates for black animals than for others.

“We do notice that black cats get adopted at a less frequent rate,” said Midler. “We have a loving and friendly black kitten up for adoption that has been here for over three months. He is great with other cats, dogs and children. So we can’t understand why he hasn’t been adopted yet.”

“Two of our dogs are brothers and black lab-mixes and have been up for adoption for over a year,” Younis said.

While the shelters struggle to get black cats and dogs adopted, they also worry about their safety during this time of year.

“Unfortunately, when I was working at an animal hospital down in South Florida, I did see a case of animal abuse regarding black cats on Halloween,” said Midler. “Thank goodness for the kind Samaritans that brought in these cats, because they had been severely burned the night of Halloween.”

Both Midler and Younis are passionate about deterring the negative stereotypes against cats and dogs with black fur.

“Honestly, the black cats are always more friendly than the others; maybe it’s in their breed because they will hug your neck and put their arms around you,” said Younis. “To people that are hesitant because of the black fur, I would just take them into the back, sit down and play with the animals.”

“I would simply let people know that superstitions about black cats are as reasonable as the boogey man’s existence,” said Midler. “Black cats and dogs are just as loving as any other color animal.”

Kaley is a reporter who can be contacted by calling 352-392-6397 or emailing news@wuft.org.
Previous Newberry Resident Paints Blue Stripes on Streets To Support Police
Next New Synthetic Drug Gaining Popularity In Alachua County 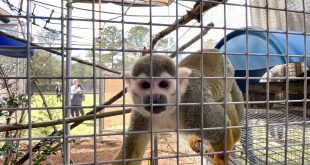 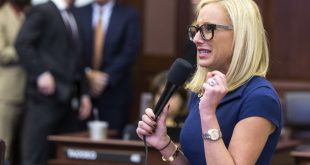 Florida would become the second state to prohibit the procedure after New York, which banned it last summer.