It was anything but desirable conditions for a run Wednesday in Marion County, but despite the cold air and windy conditions, the county’s sheriff department showcased its new combat-ready program.

Three deputies put their physical abilities on display in a half-mile obstacle course as well as hand-to-hand combat.

The physical program, instituted by the Marion County Sheriff’s Office, will make it mandatory for deputies to run an agility obstacle course multiple times per year.

Beginning January 2014, deputies will be required to make the eight-minute time on the obstacle course once every 12 weeks.

Sheriff Chris Blair designed the program to shock the deputies into physical shape.

Police Maj. Don Maines is in charge of internal affairs and training at the Marion County Sheriff’s Office. He said he saw one of the deputies go to his car after he ran the course and throw away a pack of cigarettes as if to say, “I’m done with these.”

Maines said the end result of this new program is to give deputies a personal check on their shape. 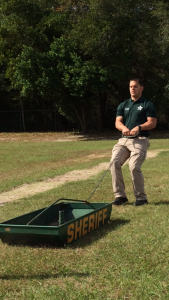 “What we’re hoping to do is help every deputy realize what level of fitness or un-fitness each of them individually are in,” he said. “I think what we’re seeing now is a sense of competition between them. So, they’re taking it to heart and they’re starting to assess their own abilities — or lack of abilities — and they’re starting to address them.”

Firearm training, disarmament and driving exercises are all part of what deputies will be tested on during their combat training. Deputy James Amidei said the accountability they gain through competition makes them push even harder.

“Some of the guys, especially some of the SWAT guys, are in competitions and are competing hard against each other,” Amidei said. “Whenever you’re running it with other deputies, you’ve got someone to push you.”

Trevor is a reporter for WUFT News who may be contacted by calling 352-392-6397 or emailing news @wuft.org
Previous The Complete Timeline Of Gainesville’s Homeless Shelter Saga
Next Nov. 14, 2013: Afternoon News In 90